Andro Dunos... that is a name I have not heard in a long time. Then, suddenly from out of nowhere, I hear Andro Dunos II was being released across a variety of modern systems! To properly review the sequel I knew I had to first revisit the original.

Often confused with a performance-enhancing drug, Andro Dunos is not the kind of game you fall in love with. It's a conventional side-scrolling shooter with clean but simple graphics. It looks like the type of game you might find on any 16-bit system. Only its two-player mode really sets it apart.

Having two players blast away at the same time was an uncommon feature in 1992 - with no slowdown no less. If only the programmers had been more thoughtful when selecting colors for the two ships! One is orange and the other is bright pink, making it very easy to get them confused.

You can fire as rapidly as you can tap, holding in the button for a charged shot. The bosses are refreshingly easy but ground installations can be stubbornly hard to destroy. Steve brought to my attention those pesky "penis worms" burrowing through the sand and I can't unsee them!

Special weapons are the name of this game. You have four to toggle between, powered up separately to varying degrees. Add in missiles and rotating units and the combinations are endless. Sudz claimed his ship sprouted "ass antlers", so anything is possible. Upon using a continue you're often awarded a few bonus power-up icons. I don't like that. Why reward failure?

The stages aren't very imaginative, depicting generic space stations, moon surfaces, and intergalactic intestines. The use of scaling to show enemies approaching from the background is confusing at times. Andro Dunos may look unspectacular as Neo Geo shooters go, but its weapon juggling system and two-player co-op put it over the top. © Copyright 2022 The Video Game Critic. 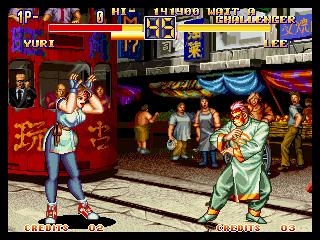