Some might criticize this vertical shooter for not showing off the Neo Geo's full capabilities. It's true, but there's no denying that Ghost Pilots is still a lot of fun. Although its gameplay is slower than other Neo Geo shooters, the challenge is less insurmountable and you can really get into a zone playing it. You pilot WWII-era planes, taking out tanks, ships, and enemy aircraft flying in formation.

Comparisons to 1942 are obvious, but Ghost Pilots is much better, with huge sprites, nifty scaling effects, and a two-player simultaneous mode. The action is smooth and easy to control, and the military-style music adds a sense of urgency. Your plane's guns can power up to three levels, and you also have a supply of bombs. I appreciate how the bombs absorb incoming missiles, doubling as a shield.

The background scenery is clean but unspectacular, and the bosses tend to be generic mechanical beasts. After finishing the first stage, you can choose one of two stages to play next, as well as the type of bomb you'd like to employ. Ghosts Pilots limits you to three continues, so you probably won't blow through the game in one sitting. The high scores are not saved, which is a bummer. But as one of the more affordable Neo Geo shooters, Ghost Pilots is definitely worth tracking down. © Copyright 2004 The Video Game Critic. 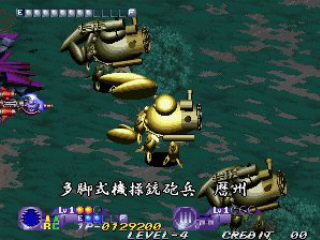 Ironclad is one of those obscure shooters held in high regard by Neo Geo fans. The game is so rare it has practically taken on mythical status! Since I could never obtain an actual copy I'm reviewing an emulated version. At least now I can see what all the fuss is about. Ironclad's stages have a distinctive retro-futuristic style with graphics among the best I've seen in any shooter.

The opening stage is set in a burning city and the scenery looks nearly photo-realistic! Objects in this game have a pseudo-3D appearance with gleaming metal surfaces. The industrial areas look appropriately gritty, but there are also beautiful natural areas with serene lakes reflecting a full moon. Not only can you select branching stages, but the stages even branch within themselves.

Ironclad offers frenzied rapid-fire shooting against waves of tanks, robots, bombers, whirly-birds, and robotic frogs that backstroke through the sewers. Boldly imaginative weapons include flaming rings that slowly emanate from your ship. Like R-Type (Turbografx-16, 1989) you have an external orb you can attach to the front of your ship or deploy to a remote part of the screen. Using this device isn't intuitive but it adds depth.

Ironclad looks amazing but sometimes its rich graphics work against it. Not only do oversized enemies tend to crowd the screen but when navigating the layered scenery it's hard to tell what you can or can't touch. The action is prone to slowdown (especially with two-players) and the game could really benefit from a rapid fire button. I wouldn't call Ironclad the most fun Neo Geo shooter, but technically this one is hard to top. © Copyright 2018 The Video Game Critic.