To classic game collectors, the Neo Geo is the Holy Grail of consoles, and for good reason. Originally marketed to ultra high-end gamers, the system originally retailed for over $600, with individual titles priced at $200 and up! In theory, the games were so expensive because they were exactly the same as their arcade (MVS) counterparts. In their time, these games represented the pinnacle of 2D graphics and pre-CD sound. The system could render absolutely huge sprites and large numbers of on-screen objects with ease. In terms of audio, it could generate clear voice synthesis and excellent electronic music through 15 audio channels. Although the system has few "must have" titles (if any), arcade-minded gamers will appreciate the simple gameplay and ample eye candy most titles provide. The Neo Geo was mainly famous for its state-of-the-art, one-on-one fighters, which were hugely popular in the early 90's. The system also made its mark with its intense shooters and over-the-top sports titles. In order to help distance themselves from the Genesis and SNES, SNK constantly touted the immense size of their games (in terms of cartridge memory). Each game displays its number of "megabits" (a misleading term if there ever was one) on its box sleeve, from 26 all the way up to 350 megabits. In the early 90's, the sheer size of the games was enough to impress some people, and knowing this, SNK purposely made their games as huge as possible. From what I've heard, the game code was actually programmed inefficiently to consume the maximum space!

The Neo Geo console itself is compact, sleek, and surprisingly lightweight. But its controllers are what won me over. Large and sturdy, they feature an old-fashioned ball-handle joystick and four large buttons (not counting Start and Select). The system was the first to accept memory cards that let you save your game, and these cards were also designed to fit the arcade machines. Apparently SNK envisioned gamers playing their games both at home and the arcade, which may be the most idiotic concept ever conceived. The memory cards would have been better used to save high scores, but alas, that would have made too much sense. 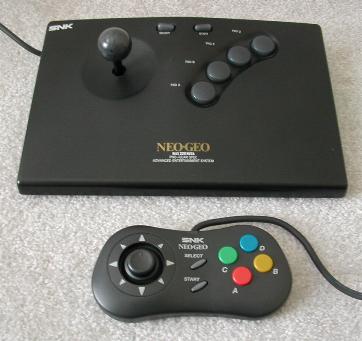 The Neo Geo cartridges are amazing - quite a shock to those used to Genesis-sized carts. These things are absolutely HUGE in size, and packaged in attractive, sturdy, binder-like boxes. Unlike almost every other classic system, Neo Geo titles are not "locked" by region, meaning your console can play any Neo Geo cartridge on the planet! Better yet, when you plug a Japanese Neo Geo game into your North American system, the text is displayed in English! Beware - it works the other way as well - if you have a Japanese Neo Geo the text will be in Japanese.

Due to its prohibitive pricing, the Neo Geo never really caught on. SNK attempted to salvage their place in the market by releasing a CD version of the system (with a slow single speed drive), and ported many of their popular titles to the new format. While these games were far more affordable ($40-$50), it was too little too late. Lengthy load times hampered the action, and once the Playstation (and Saturn) emerged with their fancy 3D graphics, Neo Geo faded from the scene.

If you're interesting in becoming a Neo Geo collector, there are a few terms you should be aware of. Cartridges for the Neo Geo console are referred to as AES (Advanced Entertainment Systems) cartridges. MVS (Multi Video System) carts are the variety that plug into the arcade machines, and they are not compatible. The MVS carts are bigger, although the games themselves are the same. If you're shopping for an American Neo Geo console, you'll find they are far more rare (and expensive) than their Japanese counterparts (although they look identical).

One popular alternative is to purchase a "modded" Japanese system with a debug chip and S-Video output. This is the route I took, and I've been very satisfied with it. This allows you to select your region (via debug menu), and tinker with development options (useless as far as I can tell). I also like how my modded system has S-Video output. Hardcore gamers will probably appreciate the option of switching to the Japanese mode, which sometimes presents the game in a less censored way (bouncing boobs and blood). There are drawbacks to owning a modded system however. Switching to "USA" mode is a bit of a hassle, and you'll have to do it whenever you insert a new game. Specifically, you must hit Select and C on the second controller and then set an option on a menu. In addition, the memory card management screen is in Japanese, but that's a minor issue.

There's no mod chip for the CD system, but at least the Neo Geo CD supports S-video out of the box. One thing to note about CD games is that they are packaged with "spine cards". In my opinion these are useless, but some purists consider them necessary for the game to be truly "complete".

Console design: A. Considering its gargantuan cartridges, the Neo Geo console itself is relatively modest in size. Streamlined and black, the system looks attractive but unremarkable. In addition to its huge cartridge slot, there's also a big reset button on the top. The front edge of the unit features a power switch, two controller ports, a headphone jack (with volume control), and a memory card slot. The video output is typically composite, although "modded" Neo Geo consoles support S-video as well.

The Neo Geo CD (C+), on the other hand, is one bulky system; its thickness and weight almost suggest a car motor. It has a pop-up lid on top for the CD, and like the normal Neo Geo, a large reset button is present on the lower left side. The front edge has two controller ports - no headphone jack or memory card slot. The system uses internal memory to save games. The main problem with this system is its slow disk access time, resulting in irritating load times for certain games (namely fighters).

Console durability: A. The Neo Geo console is lightweight, especially compared to the heavy cartridges. In fact, when pressing the cartridges into it I sometimes fear of breaking the thing. I've never had any issues with it however, and have never heard anyone complain about a broken system. Likewise the CD version seems very stable and durable.

Controllers: A+. One of the main selling points of the Neo Geo is its awesome, arcade style joysticks. These sleek rectangular controllers are practically as big as the console, and are a pleasure to use. The joystick itself has just the right "give", and the large, rounded buttons are ideal for tapping. These are quality controllers - probably the best I've ever used. Towards the end of the system's lifecycle, SNK released smaller, more conventional controllers, but I still prefer the original full-sized joysticks. 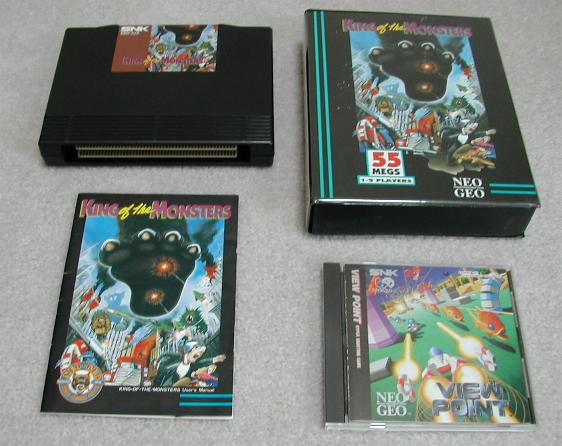 Media: A. Neo Geo cartridges are, in a word, magnificent. Six inches tall, seven and a half inches long, and more than an inch thick, these things will blow your mind. A small, shiny label folds over the front and top of the cartridge, and two long rows of pins run along the bottom. Weighing in at about a pound (give or take), it's obvious that these things are jam-packed with memory chips.

Packaging: A-. As you would expect for such expensive cartridges, the packaging is first class. Resembling small binders, these thick, black boxes have clear plastic sleeves to showcase the cover (like a Genesis game). Inside, a black plastic "insert" holds the cartridge (and manual) in place. Unfortunately, these "inserts" are made of the cheapest plastic known to man, and it's hard to find one that's not cracked (or falling apart).

Games: B. The Neo Geo game library largely reflects the tastes of early 90's gamers. One-on-one fighters are disproportionately represented, including long-running series like Fatal Fury, World Heroes, Samurai Shodown, and Art of Fighting. King of Fighters was SNK's "greatest hits" brawler, containing characters from several of its previous games. A new edition of King of Fighters was produced each year for the Neo Geo system all the way through the early 2000's. Although all Neo Geo fighters are high quality, let's face it - they're also very similar. The Neo Geo was also known for its terrific shooters, including Metal Slug, Ghost Pilots, NAM 1975, and Pulstar. Today, these shooters are easily the most prized titles for the systems, often selling for hundreds (or thousands!) of dollars each on Ebay. SNK also produced a wide variety of sports games, including Baseball Stars, Super Sidekicks, League Bowling, and Super Baseball 2020. These sports games tend to be fast-paced, action-packed, and completely over-the-top. The CD versions of Neo Geo games are far more affordable, although rare CD titles can still exceed $200.

Graphics: A+. As a big fan of 2D graphics, I really appreciate the Neo Geo visuals. The vibrant colors, huge sprites, and multi-layered backgrounds are the ultimate eye candy. The explosions tend to be impressive, and slow-down is pretty rare. Scaling is used to good effect in many titles.

Collectability: D. Although I'm happy to own a Neo Geo, I can't say it really lived up to the hype. Although my friends were pretty psyched about me getting one initially, the enthusiasm didn't last. There are plenty of decent Neo Geo games, but none that really stand out. Collecting for the Neo Geo is an expensive proposition - prohibitively so for many gamers. You'll typically need to shell out several hundred bucks to snag a console (used), and many games can run into the hundreds of dollars. Many of the more desirable titles (like Metal Slug) are far beyond the financial reach of most gamers. Fortunately, most common titles can be obtained for $50 or less, and the Japanese versions of games tend to be cheaper. Since the games are simple to play and many feature on-screen instructions, settling for the Japanese version of a game is usually not a bad idea. For those less inclined to throw your money around, the CD version offers the same solid gameplay, and whether the load times are a factor depends on your taste in games. Sports games normally load up only once (in the beginning), and shooters only load between stages, which is tolerable. Most fighting games however load between matches, which is aggravating to say the least.

Check for Neo Geo systems on Ebay
Neo Geo Game Reviews
System Review Index
Copyright 1999-2020 The Video Game Critic.  The reviews presented on this site are intellectual property and are copyrighted. Any reproduction without the expressed written consent of the author is strictly prohibited. Anyone reproducing the site's copyrighted material improperly can be prosecuted in a court of law. Please report any instances of infringement to the site administrator.