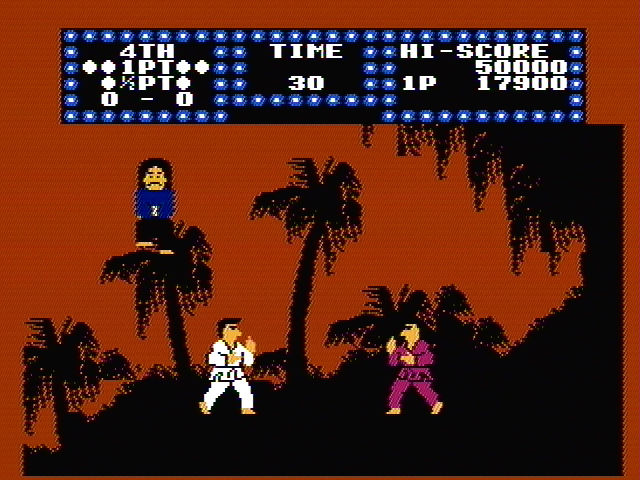 With all due respect to this early pioneer of fighting games, Karate Champ hasn't aged well at all. During the mid-80's the concept of a one-on-one fighter was fresh and exciting, but in retrospect this game is awful. Each match takes place in one of nine "picturesque" locations with a referee lurking in the background.

The control is generally terrible with hard-to-execute moves and fighters that tend to get stuck facing the wrong direction. The instructions include a confusing diagram of moves referencing right and left "levers". WTF? Are these the instructions for a different game?! Perhaps most telling of all is how I nearly managed to beat the game with no knowledge of the moves.

The graphics are plain but it's the animation that really kills this game. The fighter movements are extremely choppy and the jumps are ridiculous. It's downright comical to watch the fighters flail away in random directions, often passing clear through the other's body. How does this game even determine when a fighter makes contact? Should you somehow win, your dignified martial artist suddenly begins jumping up and down like a giddy schoolgirl.

The nine backdrops give the game much-needed variety. A few are impressive, like the palm tree silhouettes in front of a blood red sky. Others are as simplistic as a brick wall or train tracks. But no amount of eye candy can atone for Karate Champ's absolutely putrid, outdated gameplay. © Copyright 2021 The Video Game Critic. 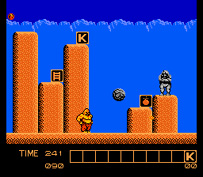 Certain enemies seem impossible to avoid, like the two birds that converge on you at the same time. Two hits will kill you but at least the checkpoints are generous. In fact you'll sometimes resume at a point further than where you died! The bosses aren't too bad and you get unlimited continues. Karnov feels a little sloppy at times, but its distinctive style helps it stand out from the crowd. © Copyright 2016 The Video Game Critic. 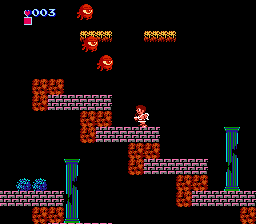 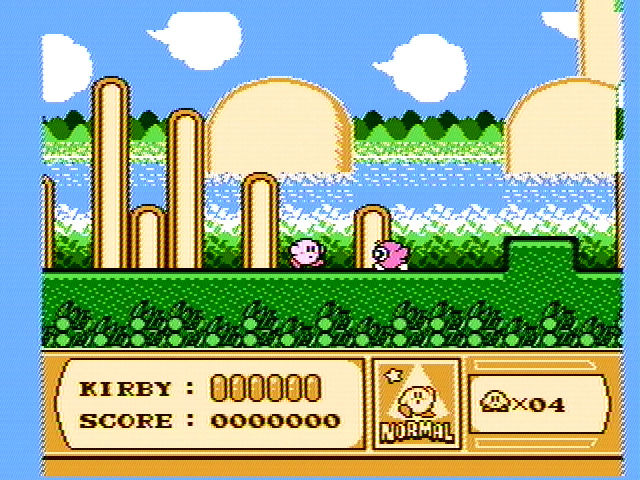 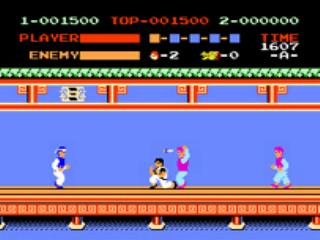 Kung Fu may have set the world on fire in 1985, but those days are well done. Controlling a black belt warrior (who appears to be wearing high heels), you must dispatch an endless parade of enemies in a Japanese temple. You're limited to the standard punch, kick, and jump-kick moves. In the first stage, most foes are idiots easily dispatched with simple high kicks. The occasional weapon-trained ninja will require some strategy to defeat, but not much. The second stage incorporates a traps and tiny dragons, and the cheap hits come early and often. Kung Fu is not particularly fun to play. Its clean graphics and surprisingly good sound effects (including some voice clips) make it bearable, but its gameplay is dated and silly. © Copyright 2003 The Video Game Critic.
Find Kung Fu on eBay, Amazon, YouTube
Copy link to this review
Recommended variation: A
Our high score: SLN 28,180
1 or 2 players
If you like this game, try: Kung Fu Master (Atari 7800),
Kung Food (Lynx), Black Belt (Sega Master System),
Chop Suey (Atari XEGS), Ninja (Atari XEGS)