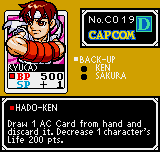 Find King of Fighters R2 on eBay, Amazon, YouTube, Forums
Copy link to this review
1 or 2 players
If you like this game, try: Fatal Fury F Contact (Neo Geo Pocket),
Samurai Shodown 2 (Neo Geo Pocket), Real Bout: Fatal Fury Special (Neo Geo),
Fatal Fury Battle Archives Volume 1 (Playstation 2), Fatal Fury 2 (Super Nintendo)
Last Blade, The
Grade: C+
Publisher: SNK (2000)
Posted: 2010/6/4
Having recently played Last Blade 2 on the Dreamcast, it's interesting to see how SNK managed to shoehorn this game into a tiny Neo Geo Pocket cartridge. I haven't been impressed with other fighters for the system, but Last Blade won me over with its playability and rich feature set. You get a nice selection of ten martial artists, and while they're rendered as squat cartoon characters, each retains a unique style. The detailed backgrounds include a scenic river trail, a bustling market, and the interior of a burning house.