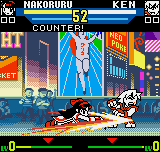 The Neo Geo Pocket has plenty of one-on-one fighters but this one pulls out all the stops. Match of the Millenium features 26 characters (!) from SNK and Capcom, including heavy-hitters like Terry Bogard, Mia Shiranui, Chun Li, Zangief, and Morrigan. The fighting quality is exceptional and the game looks about as good as a portable fighter can. The fighters are short but stylized. When attacking, their limbs are exaggerated to emphasize each hit. You only have two buttons - punch and kick, which actually makes the game a lot easier.

All the basic special moves are included, from Ryu's fireball to Guile's flash kick. Counters are performed by hitting A and B at the same time which is kind of hard to do. The stages are a pleasant surprise. From the colorful lights of the downtown area to the waves lapping a sunny beach, the backgrounds are rich and picturesque. The tuneful soundtrack features a really nice rendition of the Street Fighter theme.

All sorts of variations are available in the tournament and versus (link up) modes, and an "Olympic" mode offers a variety of mini-games. These include survival modes, time attack, dance games, and target-shooters. I wasn't crazy about any of them, but I like how your records are recorded. I would have preferred an arcade mode with a high score screen, but the variety is nice. SNK Vs. Capcom: Match of the Millenium packs quite a punch. I don't think I've ever had so much fun playing a fighting game this tiny. © Copyright 2015 The Video Game Critic.

Compared to the lackluster Fatal Fury and King of Fighters for the Neo Geo Pocket, Samurai Shodown 2 isn't half bad. In fact, I actually enjoyed this one. The controls are pretty tight and the action is relatively smooth. Shodown's fighters wield weapons, which is far more conducive to playing on a small screen.

Swords slashes leave streaks behind them, and clobbered foes tend to spin and tumble dramatically. There's even a decent one-player mode. It doesn't keep score, but it does convey a story, incorporate hulking bosses, and allow you to collect "cards". These cards not only look cool, but list special moves on the back!

Shodown's graphics are as good as it's going to get on the Neo Geo Pocket, with scenic flowing streams and moonlit villages. The well-done background music is tinged with a traditional Japanese flavor. Samurai Shodown 2 can't compare to its big-screen counterpart, but this portable version still has all of the necessary ingredients for a playable fighter. © Copyright 2006 The Video Game Critic.

I've always been a big Sonic fan, and Sonic Pocket Adventure really captures the spirit of those classic games on the Genesis. In fact, these stages are basically modified versions of those from the original Sonic games. If you've already played through those old games, this one will seem awfully familiar, but if you're new to the series, you're in for a treat.

What makes Sonic so great is his exhilarating speed. Although there is a certain amount of precision platform jumping, you'll spend much of the time watching your hedgehog whip through corkscrews, tunnels, and loops, collecting rings and plowing through enemies along the way. As you would expect from a Sonic game, the graphics are sharp and the colors vibrant, although the curves are surprisingly angular in this version.

The levels could be better designed. Many seem to double-back on themselves, making it tough to tell which direction to head next. And it's always frustrating to fall off the "bottom" on the screen. One great feature is the inclusion of a 3D half-pipe sequence (first seen in Sonic 2) which you play between stages. This fun bonus stage challenges you to collect a certain number of rings while avoiding bombs.

At first Pocket Adventure seemed like a bit of a rehash to me, but then I discovered a few extra modes that take the game to the next level. A time trial mode challenges you to clear each stage in the fastest time, and the best times are recorded. There's also a variation that requires you to collect 50 rings before finishing, which really changes your approach.

As you progress through the stages, you collect puzzle pieces you can assemble in the puzzle mode. There's even a two-player duel mode. Sega threw in everything but the kitchen sink. If you're looking for platform action on the Neo Geo Pocket, you can't go wrong with Sonic the Hedgehog Pocket Adventure. © Copyright 2004 The Video Game Critic. 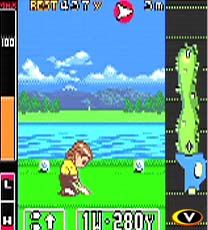 You can't tell by the name, but Turf Masters is a golf game, and a very good one at that. Like so many SNK titles, Turf Masters has an arcade sensibility that makes it instantly fun and addicting. We're talking about fast pacing, simple controls, and crisp, smooth graphics. There are three 18-hole courses and eight golfers of varying abilities. The main screen displays two overhead views - one of the entire hole, and a closer view showing your current position.

Hitting the ball is easy, thanks to two simple meters that determine power and accuracy. You can hook or slice the ball by varying degrees, but you cannot apply backspin. Turf Masters has a few odd features. If you hit the ball into the very edge of the water, you are given the option to attempt a risky "water shot", which I've never seen before in any golf game. When you hit the ball onto the green, it's VERY easy to hit the pin. On one hole, my ball kept hitting the pin and rolling off the green, which was truly annoying.

Putting uses a single meter that moves up and down with the ideal spot marked on it (Hint: For short shots, wait for the meter to come back down). The contours of the green are well defined and easy to read. The game moves along quickly, so you can squeeze in 18 holes in about a half an hour. What also helps to speed up the game is the fact that you can't exceed four shots over par. Turf Masters is a terrific little golf game that's easy to play and a lot of fun. © Copyright 2004 The Video Game Critic.