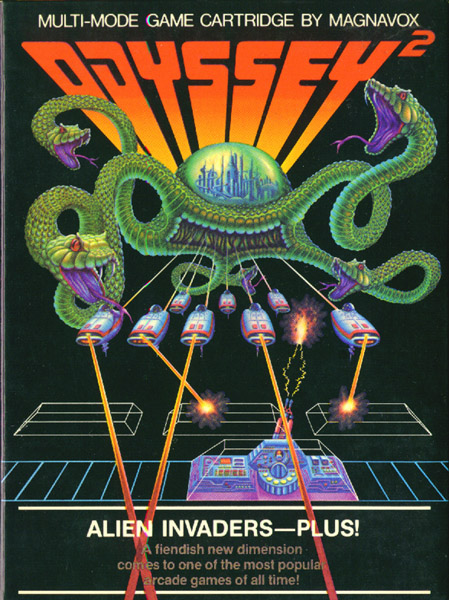 When it comes to all the Space Invaders (Atari 2600, 1980) clones out there, Alien Invaders is hands down the one with the most exciting... box art. It features a gigantic space serpent with four snakes for arms (!) and what appears to be an entire city encased in its domed head! Whoa. If only that grandiose vision translated a little better to the small screen.

The aliens are just generic human shapes, although if you squint I guess they look like little red ETs. Below each alien are cannons that resemble orange mushrooms - and are no less lethal! Beneath those is a row of green circles that serve as an impervious barrier (they suck).

Your laser cannon at the bottom is shaped like a wide pyramid. When destroyed a little guy escapes who can run up to a remaining shield to form another cannon. So you essentially have four lives per round. It's hard to take aim at the aliens as they abruptly shift from side-to-side.

Instead of a conventional scoring system (which would have been a good idea) your goal is to win ten rounds. You score a single point by clearing a screen of invaders, and they score by depleting your set of lives. You know it's a dumb system when you nail that mother ship at the top and don't have a damn thing to show for it. And then she regenerates!

It all sounds perfectly awful, but the true test of any game comes when you actually try to beat it. It's no War of the Worlds, but Alien Invaders is certainly a challenge. Enemy cannons strike like lightning, and when the mother ship descends with that all-seeing eye, things get intense. I noticed that shooting just along the edge of each shield provides some much-needed cover. Upon losing all your cannons, your dude is just left standing there waiting to be shot.

I did have one dramatic moment when I lost my last cannon just before hitting the last alien for the win. I ended up losing 10-8, but that might be for the best, because after beating Alien Invaders Plus there would be little incentive to play it again. And I'm still trying to figure out what the "Plus" is. © Copyright 2020 The Video Game Critic.

Alpine Skiing is a tough nut to crack. When you turn it on and the words "slalom", "giant slalom", and "downhill" slowly begin to cycle on the bottom on the screen. You're supposed to pull back on the joystick to select the event you want. It's a weird, non-intuitive design decision considering the Odyssey has a full keyboard for crying out loud! The screen is divided for two players, but you can just ignore the right side when playing solo.

It's neat how the skiers "assume the starting position" before the "go" signal. The object is to navigate through blue and red tree-shaped "gates" and reach the finish in the shortest time. Your skier moves slowly but if you hold in the button he speeds up dramatically. Go easy on that button, because if you miss a single gate you are disqualified! Pretty harsh! Tripping over a gate causes you to lose control temporarily, and that usually means a missed gate (and disqualification).

The razor slim margin for error forces you to move at a controlled, deliberate pace. The vertically-aligned gates are especially tricky (hint: cut them closer to the top). I like the whooshing sound as you turn, but it's hard to develop any rhythm or momentum. I like the challenge and split-screen of Alpine Skiing, but the execution could have been a lot better. © Copyright 2014 The Video Game Critic.

This is one of the most original Odyssey 2 games I've ever played. Combining live action with RPG elements, Amityville is half Dungeons and Dragons and half Haunted House (Atari 2600, 1982). As you step through a dark mansion the interior scrolls downward as a flashlight illuminates the area directly ahead. My friend Chris complained about some flicker in the background but I didn't really notice. The footstep sound effects are fantastic and there's even voice module support ("Danger! Attack!").

Just like in a real haunted house, you only get fleeting glimpses of the dangers that lie ahead. A horizontal strip across the center gives you a narrow peek, and intermittent lightning flashes illuminate the screen. Your goal is to find chests which contain diamonds and magic items. You'll also encounter spiders, bats, skeletons, and ghosts.

The battles are surprisingly fun. You repeatedly "roll a dice" to reduce the monster's hit points as he slowly encroaches upon you. I wish you didn't have to wait five seconds between attacks, but I like the suspense.

Magic items add a strategic element. The frog eye pushes a creature back a step, and the snake tongue can kill it with one blow. The vulture feature will award you with 150 points for sacrificing a turn. You can only hold one item at a time, and it can be hard to remember which one you're carrying.

I love the attention to detail (666 score in manual screenshot) and not-so-subtle horror elements (upside-down cross on title screen). Amityville seems slow at first but I became obsessed with this ingenious little action-strategy homebrew. Still trying to reach 666! © Copyright 2017 The Video Game Critic.

Originally billed as the "first new Odyssey 2 game in 15 years", this was one of John Dondzilla's first homebrew projects and it looks the part. Amok feels like a rough draft of Berzerk (Atari 2600, 1982), as you run through a series of screens populated with robots that want to kill you. Sometimes they fire big white beach balls your way, and sometimes they just walk into the electrified walls.

The AI is meant to be poor - watching them destroy themselves is part of the fun. Amok is faster than your garden-variety Berzerk clone. You can dart around quickly, but accidental collisions result in many deaths. You fire in eight directions, but the bullets come out of your head, making it hard to line up targets. After about 10 seconds an invincible bouncing head chases you off the screen, and you never know where he's going to enter.

Upon starting each new screen, you have to wait for your man to flash about 5 times before you can move, which is annoying. Then you have to immediately start working your way towards an exit to assure your escape. In the case of the brutal fourth screen, sometimes even that strategy isn't good enough.

The game suffers from sporadic bugs (especially with regards to collision detection) and stilted pacing makes it hard to get into the flow. Still, Amok fills a niche in the Odyssey 2 library, and its rough edges won't keep you from playing it over and over again. © Copyright 2015 The Video Game Critic. 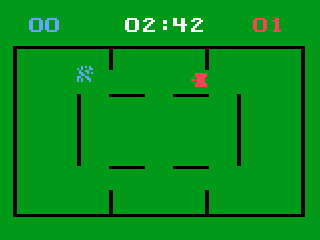 I was dismissive of Armored Encounter/Sub Chase in my initial review but I'm starting to come around. As you probably guessed this is two games in one. The tank portion is a head-to-head battle that bears an uncanny resemblance to Combat (Atari 2600, 1977) with similar tank designs, screen layouts, and even sound effects. You get 12 battlefields to choose from with various barriers and mine (!) configurations.

Half the variations offer guided missiles, and with a little practice you can thread the needle for some precision kills. The problem is, after your tank is destroyed it's not relocated, making it possible for your opponent to land several successive hits. It is however possible to put your tank in reverse, something you can't do in Combat.

One thing not readily apparently is how you only get 20 shots, which you'll almost certainly exhaust before the three minute time limit is up. During one battle my friend Scott M. pretended he was out of shots, only to start lighting my ass up when I came out of hiding! He is one sneaky bastard!

Sub-Chase looks more like Air-Sea Battle (Atari 2600, 1978) with one player flying an airplane and the other navigating a sub in the water below. You fire guided missiles at each other while trying to avoid hitting ships crossing in the center. Strike one accidentally and you lose a point.

The controls are tricky because you're throttling your speed and guiding a missile at the same time. As with the tank variations, this one is fun for a round or three. I don't think Armored Encounter can match Combat's level of fun but it's every bit as competitive. © Copyright 2020 The Video Game Critic.

This simple yet popular shooter plays surprisingly well on the Odyssey 2. The graphics aren't quite as detailed as the 2600 version, but they are smooth and colorful nonetheless, and the gameplay is just as good, if not better. Your city consists of two pyramids, two generators, and a bubble dome.

Two cannons, one on each side of the screen, are used to destroy invaders. You don't have a middle cannon like the 2600 version, but you do get something called a "Blitz Bomb". It's basically a smart bomb (wipes out everything on the screen) which you can use once per wave. It really adds some much needed strategy.

It's useful because once you take a hit or two, everything tends to go to hell pretty quickly. When the game is over, the Cosmic Ark does not make an appearance, which makes sense since that game was never available for the Odyssey 2. Atlantis is a one-player game, but you can choose between four skill levels. Check it out. © Copyright 2001 The Video Game Critic.

Featuring awesome voice synthesis and fast-paced shooting action, my friend Scott coined Attack of the Time Lord as "Space Invaders on human growth hormone". Indeed, this may be the Barry Bonds of Odyssey 2 games, pushing the system to its limits.

Before each wave, the Time Lord materializes in the form of a small, red, talking head. With the voice module plugged in, he'll predict your impending doom with ominous lines like "Conquer the earth", "Kill the human", and "Attack and destroy". How cool is that?

Attack's gameplay involves moving a triangular cannon left to right, firing at "time ships" that emerge from a vortex in the center of the screen. These ships zip around in swirling formations, attempting try to drop what appears to be bird poop on your cannon. You only fire one shot at a time, but it clears the screen very quickly, giving the game a rapid-fire feel. Still, that last time ship is usually a real pain in the ass to shoot down.

The game is fun for a while, but with extended play it reveals itself to be a bit shallow and monotonous. As waves progress you'll contend with homing missiles, but otherwise nothing much changes. Attack of the Time Lord isn't the most addictive shooter in the world, but its slick graphics and cool presentation definitely make it worth playing. © Copyright 2007 The Video Game Critic.