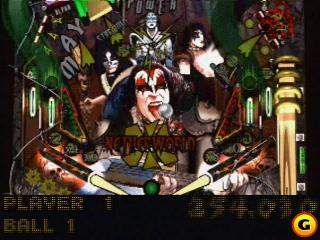 My original review for this game lamented the fact that it contains no KISS music - only generic guitar riffs. That in of itself could justify an "F". I mean, did they or did they not license the band?! Then one reader pointed out that it's possible to play your own music CDs during the course of the game. I checked the manual, and sure enough it does mention this.

Anyone who would purchase KISS Pinball would certainly own a KISS CD or two, right? Sure enough, I had a few on hand! So after loading up one of the two pinball tables I paused the game and inserted KISS Alive 2. After fast-forwarding to Calling Dr. Love (via the R2 button), I soon realized that the game's guitar-riff audio effects completely butcher any music you play - no matter how kick-ass it may be.

The pinball action itself is some of the worst I've ever experienced. The uninspired tables are grainy and the ball travels too fast to follow. Responsive flipper control is critical in pinball, but these flippers are sluggish and tend to "stick" after you trigger them. If you want to return to the main menu to save high scores or switch tables, you'll need to replace your CD with the game disk. That's a lot of trouble to go through just to play a cheap product designed to cash in on the band's popularity. Giving this game a second chance only cemented my hatred for it. © Copyright 2007 The Video Game Critic. 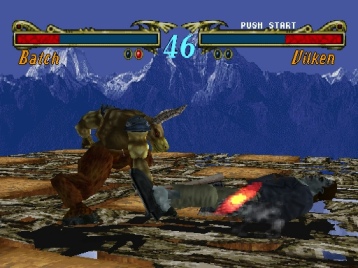 Killing Zone is a "sensational 3-D fighter". And if you don't believe me check the front cover; it says it right there! Despite the violent title and the promise of "buckets of gore" (back of box) Killing Zone is remarkably tame. There is no intro video and the lack of menu screen music is glaring. What Killing Zone does offer is eight classic monsters including a werewolf, mummy, minotaur, skeleton, and Frankenstein monster. The ladies are represented by a dark faerie and the half-snake gorgon.

Depending on whether you're player one or two, the creatures are identified by different names which seems confusing and unnecessary. An announcer kicks off each battle exclaiming "Reach around!" (whatever that means). Killing Zone's character models aren't terrible. The creatures look fearsome enough and some moves surprised me, like when the mummy grows twice as big or stretches his arms like Dhalsim in Street Fighter. I noticed that characters actually turn their heads to keep an eye on their opponents.

Unfortunately the fighting action is marred by stilted animation and erratic collision detection. The screams and sound effects have a nice resonating quality but the mountainous backdrops look awfully grainy. The soundtrack incorporates a perfectly good rip-off of the Mortal Kombat theme. The game's ultimate undoing is its lack of replayability. The normal mode doesn't keep score and the bizarre "auto mode" only lets you suggest moves as the action plays out. The options are sparse with no save capability. A remarkably bare-bones fighter, Killing Zone is playable but you probably won't want to. © Copyright 2015 The Video Game Critic. 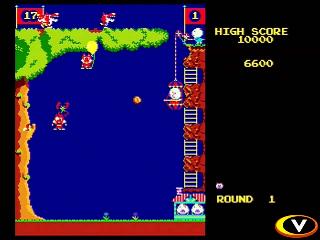 This superb collection of ten early 80's arcade games is a dream come true for retrogamers. Scramble, Super Cobra, Time Pilot, Gyruss, and Pooyan, are legitimate classics you'll enjoy playing over and over again! Road Fighter, Roc N Rope, and Circus Charlie are second-tier titles, but they're still fun to play a few times. The final two games, Shao-Lin's Road and Tie Ar Kung-Fu, are a pair of archaic fighters that are only interesting from an historical perspective.

Scramble is one of my favorite arcade games of all time, and I remember it well from the local bowling alley. This side scroller lets you shoot missiles and drop bombs at the same time, and you'll need to destroy fuel tanks in narrow caverns to maintain your energy. Super Cobra is actually the sequel to Scramble, but this time you pilot a helicopter and it's much harder.

Time Pilot is a classic shooter that lets you fly a plane in any direction, shooting down aircraft and rescuing soldiers in parachutes. Each stage takes place during a different time period, pitting you against biplanes, jets, and UFOs. Gyruss is an unconventional space shooter with a ship that moves around in a big circle, firing at enemies that emerge from the center of the screen. That catchy music is classic Bach, believe it or not.

Pooyan is a cute, cartoonish shooter with a pigs vs. wolves theme. In Roc N Rope, you scale a mountain by shooting ropes at cliffs and climbing across them. The poorly-named Road Fighter is a basic racer where you attempt to pass as many cars as you can. Circus Charlie offers six unique circus challenges, including tight-rope, trapeze, and flaming hoops.

In Shao-Lin's Road you face gangs of thugs, but your arsenal is limited to kicks and jump-kicks. Yie Ar Kung-Fu is an early one-on-one fighter, and although it's pretty bad, it does remind me of Street Fighter in some ways. You can save your high scores and settings to memory card, and analog control is also supported. When you're in the mood to get back to the basics, this is the collection you need. © Copyright 1999 The Video Game Critic. 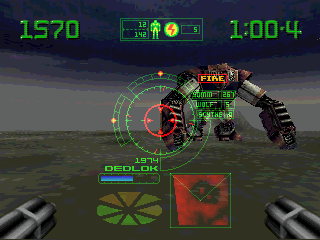 Early Playstation titles tended to incorporate low-budget video clips which I tend to get a kick out of. Krazy Ivan's intro blends computer-generated imagery (CGI) with bad acting, perpetuating every Russian stereotype in the process. It's hilarious to hear military personnel barking orders in English with outrageous accents. Krazy Ivan is revealed to be a renegade Russian soldier manning a mech warrior. When Ivan moves his body, his mech mimics his movements. Considering this concept has been used in so many modern films (Pacific Rim comes to mind), it's hard to believe this game came out in 1995!

The first-person shooting gameplay feels like an advanced version of Cybermorph (Jaguar, 1993). Enemy robots materialize from nowhere but it's fun to blast them with missiles and machine guns. They're easy to destroy and they often release captive soldiers you can collect for points (I thought I was running over them). There are enemies in the air too, but using L1 and R1 to aim up and down is awkward as hell. You can't see particularly far into the distance but the animation is smooth as you navigate the mountainous landscape. There are some frame-rate and audio hiccups, especially when your female commander appears in the corner of the screen.

Each stage requires you to defeat several mech warriors and then destroy a shield generator. The mechs come in an interesting assortment, some resembling robotic wild animals like a gorilla or tiger. The sound effects that accompany these beasts can be pretty unnerving. Strafing is integral in battle, but instead of continuous movement you tap the shoulder buttons to "shunt" one step at a time.

Between stages you're treated to some video clips with comedic elements to keep things light. When your mech is destroyed the game abruptly ends and prompts for your initials for the high score screen. I like Krazy Ivan. It's a pretty solid shooter and its cheesy video intermissions make it all the more endearing. © Copyright 2018 The Video Game Critic.