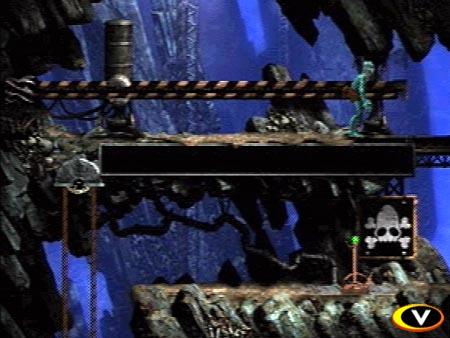 This sprawling OddWorld sequel retains the formula of the original game while incorporating bizarre new creatures, expansive new environments, and added gameplay techniques. This time our Mudokon alien hero is infiltrating a massive bone-processing factory (Mudokon bones of course). Exodus comes spread over two disks with a 60-page instruction booklet, giving some indication of just how big and involved this adventure really is.

The industrial environments are not quite as dark this time, but still offer the same brand of thoughtfully designed puzzles. There's usually only one way to solve each one, and your execution needs to be near perfect. Like the first game, speaking simple commands plays a key role. One useful new phrase is "All Y'all", which allows you to address several of your Mudokon friends at a time. Later in the game you can "possess" other creatures, and each species has its own limited vocabulary.

Another new element is the "mine cart", which actually resembles a big wheel that crushes everything in its path. Tubes can be used to move between areas, and well-rendered cut-scenes do a nice job of conveying Abe being whisked between locations. Like the first game, it's cool how you'll often inadvertently preview new areas as you move through the contiguous screens.

Perhaps the best new feature of Exodus is its "quick save", which lets you save your progress at the touch of a button. Like all OddWorld titles, a quirky sense of humor pervades your journey, from the green clouds caused by fluctuation to blind Mudokons who miss escape portals and jump into walls instead.

A two-player coop mode is also included, but it's alternating turns only, and I really didn't have the patience for it. Exodus is a well-constructed adventure, but the benefit of the new features is largely offset by the games' more elaborate and demanding puzzles. Exoddus will thrill those who mastered the first game, but for newcomers this is a heck of a lot to chew. © Copyright 2008 The Video Game Critic. 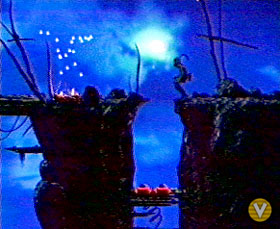 Abe's Oddysee was considered fresh and innovative upon its release, and it still retains those qualities many years later. Not only did OddWorld deliver quality 2D gameplay on a system best known for its polygons, but it conveyed a very distinctive style and dark atmosphere. Abe's gameplay is similar to 2D adventures like Flashback (Genesis, 1995), but OddWorld takes the formula to the next level with innovative features and excellent graphics.

The main character is a goofy-looking "Modokon" alien forced to perform slave labor in a meat factory. When Abe discovers that Mudokon is the main ingredient in the latest product, he makes a bid to escape. Getting Abe to safety requires trigger reflexes and puzzle-solving abilities. To help me review this challenging game I enlisted the help of a friend who's not only a big fan of the Oddworld series, but also bears a striking resemblance to the main character.

As Abe sneaks between contiguous screens in the dark industrial facility, he can save his fellow Mukodons by sending them through escape portals. This requires him to first communicate using a number of simple phrases like "hello", "follow me", and "wait". Saving Mudokons is optional, but dedicated gamers (like George) will go to great lengths in order to save every last one. Along the way you'll need to evade nasty guards with claw-like heads and yapping dog-like creatures.

Abe is unarmed but can lure adversaries into trap doors and meat grinders. OddWorld incorporates a lot of stealth elements like tiptoeing past sleeping guards, hiding in shadows, and fooling motion detectors by standing still as their beams pass over. The character animations have a whimsical charm, and the dark industrial scenery is rendered with an artistic flair you'll rarely find in a 3D title. An ominous musical score adds tension, with great stereo sound effects that often cue you in to what's in the next room.

Abe's Oddysee is a satisfying adventure, but only if you have the patience. Many areas need to be tackled in a strategic, deliberate manner, with little room for error. You will die a lot in this game, and the trial-and-error nature of it all can border on tedious. You can save your progress from the pause menu. OddWorld is not for everybody, but gamers looking for a more cerebral challenge will be hooked. © Copyright 2008 The Video Game Critic. 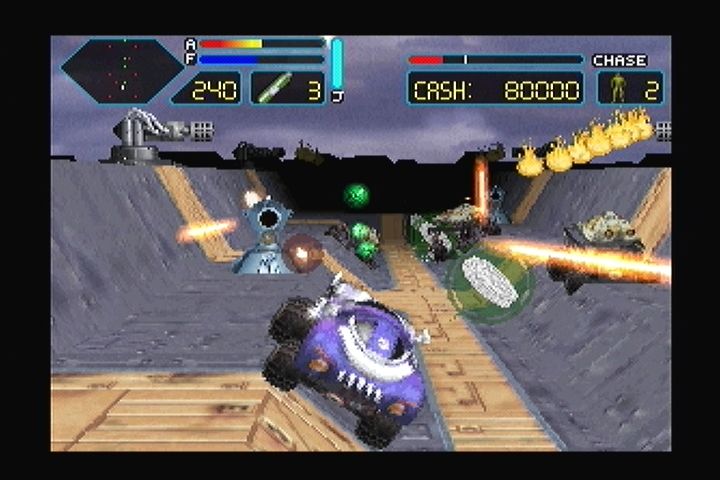 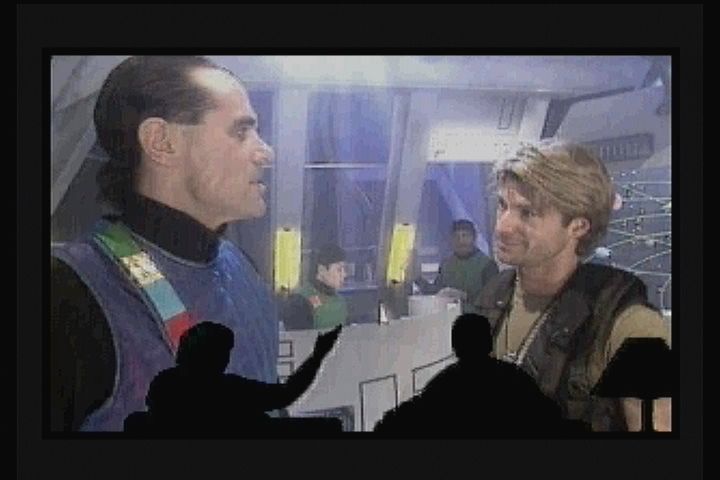 Many early CD titles incorporated full-motion video whether it was warranted or not. After all, something had to fill up all that extra space! In those days the live-action cutscenes were low-budget affairs with cheesy effects, bad acting, and laughable dialog. Depending on your point of view these games are awful, priceless, or quite possibly both.

If Off-World Interceptor Extreme is any indication, full-motion video had already become a joke by 1995, so Crystal Dynamics took a new tact. This self-aware game mocks its own scenes by superimposing silhouettes of two wisecracking critics a la Mystery Science Theater 3000. The result is surprisingly entertaining with a number of laugh-out-loud moments. The scenes feature all the usual tropes like the cocky pilot, the barking squad commander, and the sexy female lieutenant with an outrageous Russian accent.

The cutscenes are so much fun it's kind of a bummer when you have to settle down to play the game. Playing Interceptor involves guiding a bouncing buggy over rocky alien landscapes while speeding into the horizon. The sensation of speed is fair but you can't see too far ahead. Each stage is referred to as a "chase" but I have yet to figure out what I'm chasing. While you're basically "on rails" you can scoot from side to side far enough to drive through arches and avoid obstacles.

That said, the degree of chaos is just too much as missiles converge and enemy vehicles ram into you from all directions. You're constantly inadvertently running into random icons because you just can't stop! Why? Because you want to see the next cut-scene! Off-World Interceptor Extreme is far more enjoyable to watch than play. Unfortunately that's not a quality most people look for in a game. © Copyright 2021 The Video Game Critic. 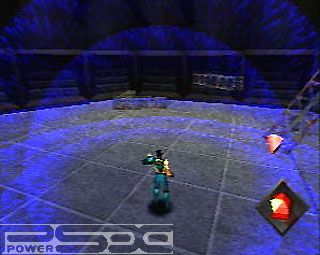 This game was a big deal when it was previewed in 1997. Offering non-stop action and incredible explosions, many magazines predicted this third-person shooter to be game of the year. Control problems ultimately prevented One from reaching its potential, but it's still a wild ride.

You play John Cain, a Rambo-like hero in a 3D, Blade Runner-like world. As you run for your life and blast everything in sight, you're pursued by planes, helicopters, and an army of soldiers. Everywhere you go, from the roofs of a metropolis to the depths of an undersea lab, mayhem follows. There's some occasional slowdown, but let me tell you, the amazing explosions and utter devastation is a beautiful sight to behold. When a plane swoops in and destroys a bridge you just stepped off of, it's quite a rush.

You can blow up just about everything, and even enemy soldiers explode when you shoot them! Talk about gratuitous! The graphics and scenery are terrific, and the audio, featuring the radio conversations of your pursuers, is interesting and fun.

So what's the problem? There's simply too much platform jumping, and the touchy analog controls aren't up to the task. You'll blow your way through most of a level without losing a guy, and then miss five jumps in a row. Frustrating! Even so, One offers dishes out enough action and carnage to satisfy most shooter fans. © Copyright 2000 The Video Game Critic.