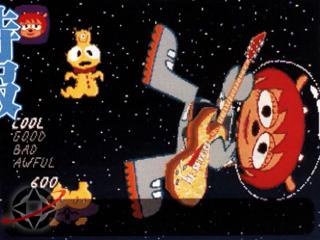 This is hands-down the best video game I've ever played with the word "Lammy" in the title. As the unofficial sequel to the popular Parappa the Rapper (Sony, 1997), this musical game provides plenty of challenge but the weird-o-meter is off the charts! Like Parappa, you must repeat button sequences to a beat, but this time you're playing the chords of a guitar instead of rapping. It actually works pretty well, but It's tough to hit all of the notes because they come at you so fast. At times the game feels like a rehash, especially with stages that feature "recycled" Parappa songs. The graphics are very nice, with humorous, paper-thin characters and cool special effects. The storyline however is bizarre, juvenile, and occasionally embarrassing. Most of the tunes are decent, but the lyrics are absolutely idiotic. Um Jammer Lammy is definitely a trip, and if you can stomach the storyline, the challenge will keep you hooked. © Copyright 2000 The Video Game Critic.
Find Um Jammer Lammy on eBay, Amazon, YouTube
Copy link to this review
1 player
If you like this game, try: Parappa the Rapper (Playstation),
Guitar Hero Live (Playstation 4), Guitar Hero: Van Halen (Xbox 360),
Guitar Hero (Playstation 2), Guitar Hero 5 (Xbox 360)
VR Golf '97
Grade: B
Publisher: Gremlin (1997)
Posted: 2000/7/27
Rating: Everyone 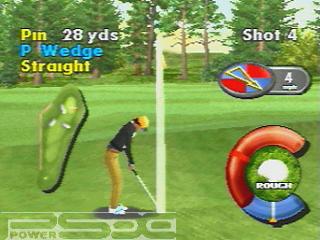 Before Hot Shots Golf, this was one of the best golf games around. With realistic graphics, smooth gameplay, and excellent commentary, VR Golf even bests EA's PGA series. There are no real golfers in this game, but the polygon players look fairly realistic. A fly-by feature offers a nice preview of each scenic hole, accompanied by informative commentary.

The swing control mechanism is just like every other golf game you've played, but the draw/fade control is better, making it easy to curve your shots around trees. Unfortunately, you can't apply backspin or topspin on your ball. Pat O'Brien and Brit Peter Alliss provide commentary comparable to TV coverage, so be sure they are both on. Not only are they very accurate, but their dry British humor is hilarious at times.

In terms of options, you can tweak the gameplay and presentation in just about every way imaginable. VR Golf is fun, but it has its share of flaws. There are only two courses, and there's a lot of loading time between holes. While most of the camera angles are cool, the swinging camera is disorienting, making it hard to tell where the ball is heading. The most annoying aspect of the game is how each player has to press a button after every shot. During multiplayer games, you constantly have to remind the other players to hit their button. Even so, this is an old favorite that golf fans should appreciate. © Copyright 2000 The Video Game Critic. 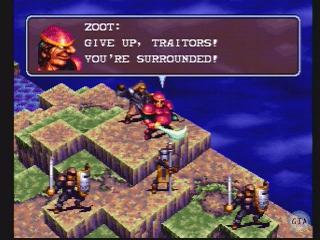 I don't play a lot of RPG/strategy titles, but Vandal Hearts won me over in a big way. This is truly one of my all-time favorites. You control a band of warriors caught up in an intricate storyline far too complex to explain here. The basic gameplay consists of a series of turn-based battles. You individually tell your warriors what to do, and then sit back and watch the action unfold. Vandal Hearts is surprisingly gory, with each kill causing a geyser of blood to spring forth. The battlefields range from rolling meadows to claustrophobic dungeons, and each requires a different strategy. Warriors range from powerful knights to frail magic users, and some of the spells you cast trigger amazing visual effects. The story line is absolutely enthralling, and the thought-provoking gameplay will have you hooked until the very end. Every Playstation fan needs this title in their collection. © Copyright 1999 The Video Game Critic.
Find Vandal Hearts on eBay, Amazon, YouTube
Copy link to this review
1 player
If you like this game, try: Vandal Hearts II (Playstation),
Chrono Trigger (Guest Review) (Super Nintendo), Final Fantasy (Guest Review) (NES),
Chrono Trigger (Nintendo DS), Star Wars: Jedi Power Battles (Dreamcast)
Vandal Hearts II
Grade: B
Publisher: Konami (1999)
Posted: 2000/12/10
Rating: Mature 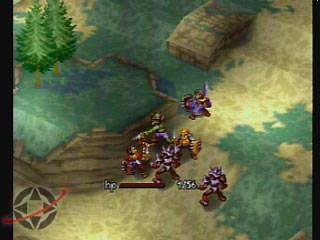 The first Vandal Hearts was a tough act to follow, and although Vandal Hearts II (VH2) manages to hold its own, it can't capture quite the magic of the original. Like the first game, this is part adventure but mostly strategy. An RPG-style story unfolds as you guide a group of characters around the countryside fighting one battle after another.

Like the first Vandal Hearts, the plot is long and complicated, but never boring. The battle system has changed dramatically, and not necessarily for the better. In the first Vandal Hearts you issued orders to all of your characters at the start of each round, and then sat back to watch the battle unfold. In VH2, you and your opponents take turns directing one character at a time. When all characters have been used, the round is over.

The good news is that this adds some strategy, since you have to guess which character the CPU will use next. The bad news is that if you try to attack an enemy who's been activated during the same turn, your character ends up swinging at thin air. This happens way too much, and it always looks ridiculous. I definitely prefer the old battle system.

Vandal Hearts II is still worth playing, and it's more than twice as big as the original. The sprite graphics are largely unchanged from the first game, and the spirited, renaissance-style music is excellent. It's no classic, but fans of the original game might find this hard to resist. © Copyright 2000 The Video Game Critic. 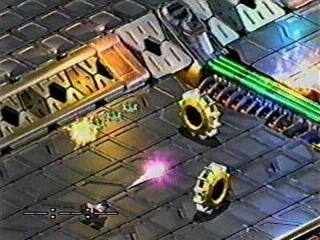 Viewpoint is an isometric shooter with devastating power-ups and a legendary difficulty level. It plays a bit like Zaxxon, except you can't adjust the altitude of your ship. The graphics here are even sharper than the original Neo Geo version. Metal objects gleam convincingly, and despite being rendered with 2D sprites, the objects appear to be 3D. The pumping, dance-oriented soundtrack also adds a lot to the experience.

Viewpoint's full-motion video intro looks like a lame Star Wars rip-off, but the audio is amazing. I didn't realize they even had surround sound back in 1996! You'd think this game would be a slam-dunk, but surprisingly enough, the gameplay is hurting. First off, the control is seriously lacking. The steering feels stiff and inexact, so you can't aim with precision. That doesn't bode well when you take into account Viewpoint's insane difficulty.

Worse yet, when the screen gets crowded with projectiles, the action slows to a crawl and the frame-rate goes straight to hell. I was absolutely shocked to witness such a heinous degree of slow-down on a console like the Playstation. A three-letter password is provided, but there's no memory card save capability. I also dislike how the music tends to kick in belatedly during the opening stage. Viewpoint is a good game, but this Playstation translation didn't turn out very well at all. Stick with the Neo Geo version. © Copyright 2005 The Video Game Critic. 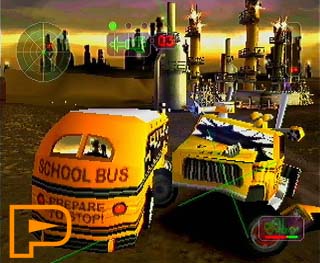 This vehicle combat game was the first legitimate challenger to Twisted Metal, and it had a lot going for it. First of all, the 1970's theme gave it a unique identity and provided plenty of humor. The theme is reflected in every aspect of the game including the driver's goofy outfits, the outdated vehicles, and the retro music.

Unlike the flat, static scenery of the early Twisted Metal games, V8 has smooth, rolling hills, and you can blow up just about any structure. Another nice touch is how newly-acquired weapons mount themselves to the top of your car. The battlegrounds are fresh and original, including a ski resort, the Hoover dam, an oil refinery, and a ghost town. Despite some clipping problems, the graphics rate is highly compared to Twisted Metal. There are some really funny animations, like an old lady that flies out of the back of the camper!

So what's not to like? Well, most of the weapons are very cheap. The guided weapons require no aiming at all, and since you get about 20 at a time, you can rain down heavy damage on other cars with little effort. Yes, I had the same beef with the lightning attack in Twisted Metal 2, but the problem here is more rampant. V8 was never mounted a serious threat to Twisted Metal, but it does provide a nice change of pace for car combat fans. © Copyright 2001 The Video Game Critic.