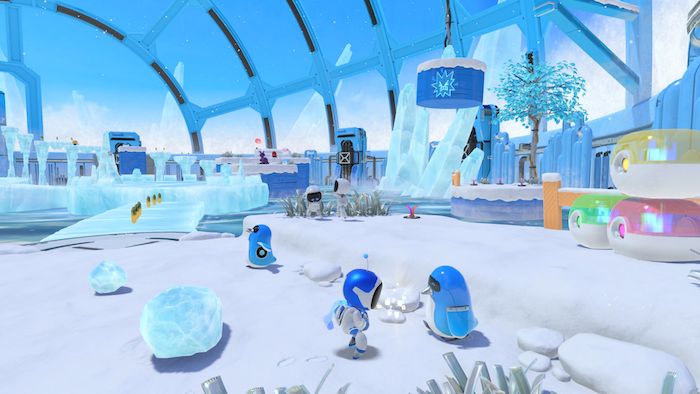 What's this? A pack-in game? In the words of Obi-Wan "that is a term I've not heard in a long time." Astro's Playroom comes pre-installed on every PS5 console and it's a fun little romp.

The first thing it does is walk you through the special features of the PS5 controller. Some are previous-generation holdovers like motion sensitivity and that lame touchpad. The new "haptic feedback" vibration however is pretty amazing. When a controller can make you feel like you're walking through a freaking sandstorm, that's saying something. The adaptive triggers are also very cool, providing varying degrees of resistance as dictated by the game.

Astro's Playroom is a high-tech platformer starring an oh-so-adorable little robot who can punch enemies and hover short distances using jets in his feet. This game looks positively stunning, with tight controls and a pumping techno soundtrack to boot.

A hub area lets you select from four sprawling worlds, each boasting a diverse range of environments and play styles. You'll hop around a beach, slide down ice platforms, and climb a wall in a monkey suit. You'll roll around as a ball, blast aliens, and fire arrows at explosive targets. References to classic games abound, and there are high-speed sections that put most Sonic games to shame.

In addition to "uncovering" all Sony's previous consoles, you'll discover "lost artifacts" like the Move Controller or the Eye Toy. Running through the stages is great fun the first time, but I'll take a pass on "speed run" modes. I get annoyed by the parts of the game that require tilting the controller or fiddling with the touchpad. And whenever I have to blow into the microphone it makes me feel dizzy.

Astro's Playroom is the perfect introduction to the Playstation 5, showing off its features while celebrating Sony's 25 years in the video game biz. If you're compelled to unlock all of its secrets or master the speed-runs, the game even has replay value. Some may call it a glorified tech demo, but if that's the case Astro's Playroom may be the best tech demo of all time. © Copyright 2022 The Video Game Critic. 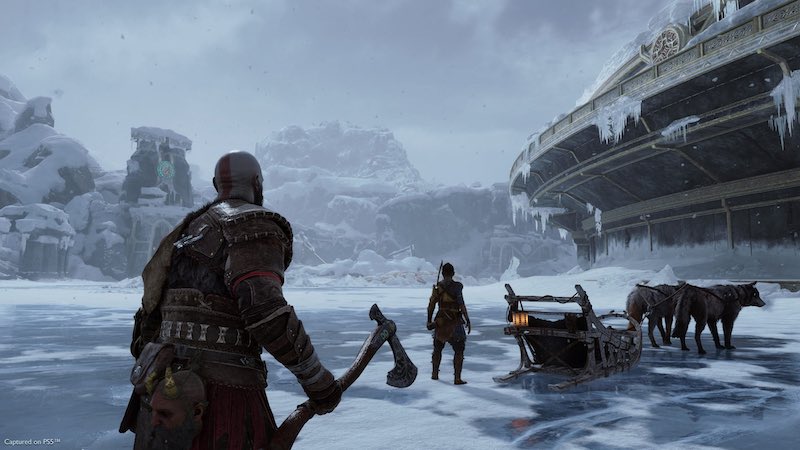 The original God of War (PS2, 2005) was a spectacle to behold, elevating hack-n-slash gameplay to a heavenly level with its majestic temples, colossal giants, and rich mythology. A series of excellent sequels followed but each with a sense of diminishing returns. The God of War (PS4, 2015) reboot placed more emphasis on story, giving Kratos a son to look after. Not a fan! Ragnarok continues the trend and I'm not happy.

The first part of the game takes place in an icy winter wonderland that really put me in the spirit of the season. The game is undeniably beautiful but its gameplay is strictly by-the-numbers. Upon reaching a clearing in the woods you can expect an attack from a gang of savages, wraiths, werewolves, or trolls.

Your main attack and block are assigned to the shoulder buttons, but in the heat of battle it's too easy to accidentally hit the option button or touchpad, pausing the action. The combat is rinse-and-repeat, and the over-the-shoulder view makes it hard to locate enemies. I did enjoy the idea of directing Atreus to shoot things with his arrows. I just wish designers would stop treating L3/R3 like normal buttons. These are awkward to press in the heat of battle, and often unresponsive.

When not fighting or exploring you're solving puzzles that might involve freezing water or ricocheting light beams. The first of each kind is clever, but after five more derivative puzzles, it gets old. There's plenty of platforming but it's of the semi-automated, Sonic the Hedgehog variety.

Ragnarok wallows in its gratuitous, self-indulgent story. The cut-scenes are not to be enjoyed, only endured. Your son Atreus is now the center of attention and he's a whiny little prick. And it's not as if the dialog is remotely interesting, clever, or funny. Toss in a few unnecessary F-bombs and it's just embarrassing.

This game has got to be the poster child for forced diversity. First, Atreus gets a black girlfriend from out of nowhere. Watching them spend an afternoon picking fruit together taught me the meaning of "walking simulator". The pair end up in a boss battle against an unhinged, 100-foot-tall, elderly black woman! Am I the only critic who found this unlikely turn of events just a little disconcerting? Even by God of War standards this is flat-out bizarre.

I'm old enough to remember when God of War had some balls. In the original game you had a vague sense of the narrative but the emphasis was on ass-kicking and it was positively epic. Apparently this new generation of God of War would prefer to get in touch with its feelings instead, and frankly it's kind of pathetic. © Copyright 2022 The Video Game Critic.