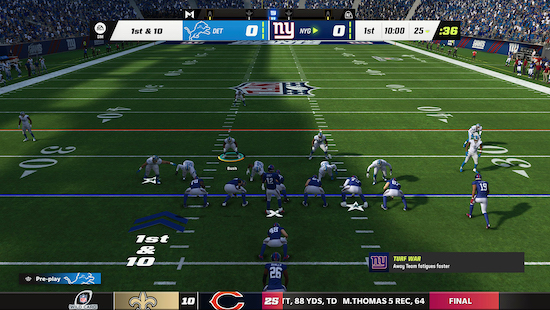 My interest in Madden waned during the PS4 era, but with a new generation upon us I thought it was time to climb back on the wagon. It helps that this year's cover is graced by the late, great John Madden himself. I regard the many years he provided color commentary alongside Pat Summerall as the "golden age" of the NFL.

When you first fire up Madden NFL 23 you're forced into replaying the Super Bowl rematch between the Bengals and Rams. I think they do that to buy time for the install process. The game looks like a million bucks, with picture-perfect stadiums inside and out. I like the cutscenes of fans, as well as coaches interacting with players on the sidelines.

After the Super Bowl you're forced to play yet another game! This is the John Madden Legacy game. It's a nice homage to the man who started his career in the 1960's as a player before finding success as a coach and in the booth. The commentators discuss his career highlights and there are Madden video and voice clips peppered throughout.

After playing those two games you're finally introduced to Madden 23's new features, but I can't say I'm impressed. There are now ten ways to throw a pass? Wonderful. Another unwanted feature is the "key moments" mode which reduces each game to a handful of pivotal plays, skipping the rest! Can you imagine playing a game like that? Well, it's the default for franchise mode!

Madden 23 places a lot of renewed emphasis on player reactions and celebrations. After making a first down you can do a dance or make the first-down sign. After a touchdown you can even initiate team celebrations. I find that stuff very stupid but I guess it's part of the modern game. The kicking meter has been very much dumbed down, to the point where a 50+ yard field goal is like a chip shot - even if your name's not Justin Tucker.

You'll notice I haven't complained about the basic gameplay, and that's because on the field Madden 23 is beyond reproach. Players move with utmost realism, and I love how they'll make tippy-toe catches along the sidelines. Playing as Tom Brady, it's so satisfying to zip the ball to a receiver, who then gracefully tucks it in and turns upfield. I suspect the NFL instructed EA to tone down the hits, because they appear noticeably soft.

It's got polish but Madden 23 suffers from a lack of showmanship. The commentators yap away non-stop but I can't remember one thing they said. A Madden/Summerall commentary mode would have been awesome. The half-time and post-game shows are mere statistical screens, with no video highlights, interviews, or insight. EA played it safe with this one. Unlike its colorful namesake, Madden NFL 23 feels decidedly corporate. © Copyright 2022 The Video Game Critic. 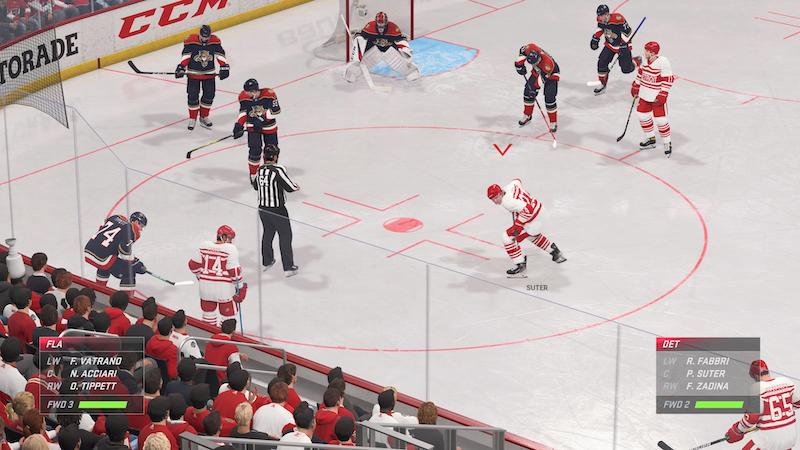 Hockey and video games go together so nicely! You have a bright white rink, a little black puck, and a bunch of guys in pads banging into each other. NHL 22 lets you dive right in with that ever-handy "play now" option.

I don't see how the graphics can get much better than this. The arenas are meticulously detailed and the players are truly lifelike. Even the raucous crowd and animated mascots look great. The commentators are positively amped, as if they've just gulped down three pots of coffee!

I'm starting to notice a trend, which is that the controller sets the PS5 versions apart from their PS4 cousins. The jostling of the players causes constant vibration feedback, prompting my buddy Eric to remark "Dave! I think there's a little mouse trapped in my controller!" There's also a cacophony of sounds emanating from the controller speaker, including whistles, yells, and some fuzzy music. I think they went a little overboard.

The controls continue to be an issue for me. While I try to embrace the default dual-stick scheme, I never feel totally comfortable with it. The alternate "NHL 94" controls (yes, that's what they are called) simplifies things to two buttons, but they aren't as responsive as I was hoping. If you try to slap a shot but you're on the wrong side, your player will need to pivot his body before he can perform the shot, giving your opponent ample time to steal the puck.

The graphics, while shiny and oh-so-bright, are also kind of busy. The game super-imposes stats on the ice, tiny player icons, dotted lines to indicate passing opportunities, and all kinds of other junk. The only thing not highlighted is the damn puck, which is pretty easy to lose track of! Is it just me, or are hard-hitting body checks a thing of the past? I guess the NHL has gone the NFL route, toning down the action.

I have much respect for the franchise mode because it gives you the option to gloss over tedious details like draft, trades, salary cap, and staff management. Disable all that crap and you're pretty much left with a season mode, which is what I wanted in the first place.

Critics love to nitpick but I can't deny NHL 22 is exciting. When you deliver a pass in front of the goal, it's intense! And when the opposing player has a breakaway attempt, you'll be holding your breath! It's no NHL '94 (Genesis, 1994), but if a buddy comes over and wants to go toe-to-toe, this is the game you'll want to pull out. © Copyright 2022 The Video Game Critic. 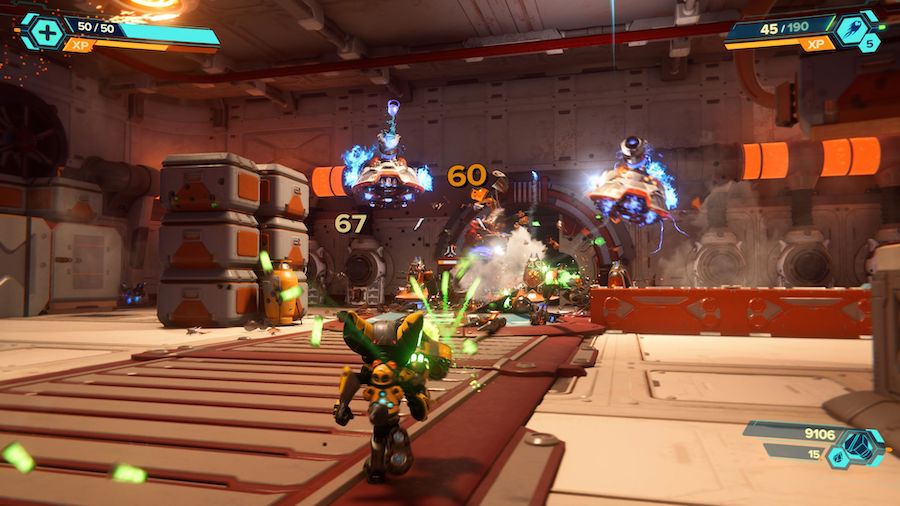 I've enjoyed this series since the original Ratchet and Clank (PS2, 2002), and this latest chapter is quite the spectacle. It opens with a parade flying over a bright futuristic city honoring our heroes. When all hell inevitably breaks loose, the game looks even more impressive, maintaining a smooth framerate as a million objects are flying in every direction!

The premise is that our lovable little robot Clank has created a "dimensionator" gun allowing dimensional travel. Inventing it seemed like a good idea at the time, but would you believe it fell into the wrong hands? Is it just me or does Ratchet look like a furry version of Chris Hemsworth? You'll also play as an alternate dimension version of Ratchet who's a girl. The villain Emperor Nefarious is so over the top, he's practically begging to be played by Jim Carrey in the big screen adaptation.

Rift Apart takes full advantage of the PS5 controller. There's a lot of cool sounds that emanate through the controller speaker and the adaptive triggers are also used to good effect. You can squeeze them half-way to unleash a normal shot, or harder to go full-bore. It's cool how your finger feels the resistance at the half-way point. Holding in the trigger for rapid-fire causes the controller to spasm, making you feel as if you truly are unleashing bolts of energy!

The action is pretty straightforward as you warp between alien planets looking for parts or whatever. I appreciate how certain missions are marked as "optional", in case you just want to advance the story. There are some very cool locations including a rainy, Blade Runner-esque futuristic city. Adding variety are puzzle stages for Clank that feel like a 3D version of Lemmings (SNES, 1992). The game saves automatically, which is pretty sweet.

The shooting is fun thanks to ample firepower and thunderous explosions. Your standard gun fires five missiles at a time in a wide configuration. Another weapon discharges a blast of lightning that destroys anything in close range. Another deploys a robot ally to fight for you. There are tons of weapons to choose from and experimentation is half the fun.

The controls could be better. Using the directional pad to toggle weapons is a little awkward, as I never knew what weapon had ammo at a given time. The game uses every button on the controller, and at times it twisted my fingers into knots! The jet boot "speed runs" are especially tricky, forcing you to use combinations of four buttons.

The new ability to travel through portals - while a nice visual effect - gets a little tiresome and confusing. Fighting in the expansive arenas is fun, but it's hard to maintain a sense of your surroundings. I often find myself backing into enemies. It's easy to forget you also have melee attacks, which are also quite effective.

Ratchet and Clank: Rift Apart is a satisfying combination of exploration, puzzles, and combat. The game looks pristine, although I did get stuck in the scenery once upon respawning. It's nothing revolutionary or even particularly memorable it, but if you're looking for offline action this is good, clean fun. © Copyright 2023 The Video Game Critic. 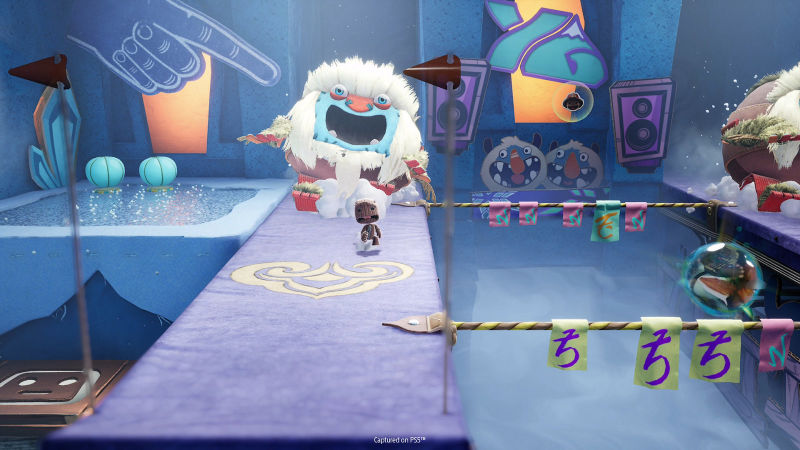 If you're looking for a Playstation 5 "starter game", Sackboy: A Big Adventure is a safe bet. Fully playable off-line and kid-friendly, this is basically a 3D version of Little Big Planet (PS3, 2008). Assuming the role of a cute little guy made of burlap, you'll explore "crafted" worlds of fabric, clay, cardboard, wood, zippers, and shag carpet.

Sackboy's gameplay is easy-to-grasp as you jump, punch, grab, and roll your way through dozens of colorful stages with imaginative, patched-together scenery. Though the gameplay is basic, there are original flourishes like hanging onto a spinning cylinder or flying on rockets you ignite. Each area introduces new ideas. For example, in the jungle world you can hurl a boomerang to clear out weeds.

If you enjoy collecting stuff, this game is for you! You'll gather all sorts of bells, balls, and symbols. There are piles of balls all over the place, and frankly I got a little weary of collecting them all. The only ones I really cared about were the blue balls which unlock new areas. They are harder to find, and sometimes must be earned through hidden mini-games.

The controller is used to good effect, providing audible and vibration feedback whenever you perform an action. One time my controller felt and sounded like a stomach gurgling! I love the train stage where you can feel it rumbling down rickety tracks! The game also shines during the undersea levels where you tilt the controller to guide wooden planks.

The soundtrack offers an eclectic mix of disco, funk, and world music. In the stage featuring that "don't believe me just watch" song, the scenery comes alive. Perfectly synchronized with the music, platforms move to the beat as wooden characters dance in the background. This game is quite festive!

Sackboy: A Big Adventure feels like a more fully-realized version of Astro's Playroom (PS5, 2020). There's plenty of areas to unlock and discover, but it all starts to look the same after a while. The fixed camera causes occasional depth perception problems, causing you to plunge to your death during what should have been an easy jump. Sackboy couldn't hold my attention for long, but it would often bring a smile to my face. © Copyright 2023 The Video Game Critic.