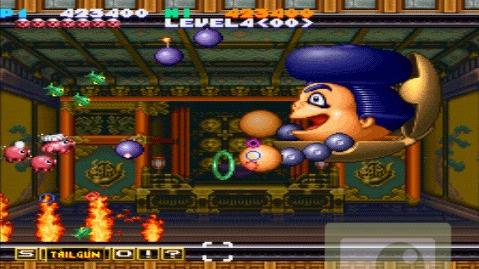 I first heard about Parodius in the mid-90's while reading the "International News" section of a video game magazine. I couldn't wait for this zany take-off of the space shooter genre to hit the shores of America. Well, I'm still waiting, so I had to import Parodius Portable Collection from Japan.

Parodius is based on Gradius (NES, 1986), a game that helped mold the shooter genre by incorporating so many familiar elements like end-of-stage bosses and selectable power-ups. Parodius adopts the same side-scrolling gameplay but substitutes generic cannons and ships with cuddly critters, clowns, and scantily clad ladies.

The colossal bosses include a panda in a tutu, a dancing showgirl, and a nefarious ear of corn. There are some outrageous sights, and it's fun to see what each stage has in store. Each of the five games is high quality, but they all look and play nearly the same.

One drawback to playing them on the PSP is that it's hard to make out what some of the smaller objects are supposed to be. The power-up system lets you trade in pods for power-ups on-the-fly, and I love the auto-fire/auto-power-up option (just hold the triangle button!).

The gorgeous stages include bright flowery meadows, pirate ships, and neon-lit city skylines complete with fireworks. The games have a carnival flavor, and the soundtrack incorporates many familiar jingles (some of which are annoying).

Parodius is much easier than Gradius, with less intense crossfire and more forgiving collision detection. Once you load up on weapons you're nearly unstoppable, although after taking a hit you lose everything.

High scores are recorded, but be sure to enable the autosave. With its wacky enemies and random environments, Parodius doesn't make any sense, and maybe Konami didn't think Americans would "get it". Well, there's nothing to "get", so just sit back and enjoy the sheer madness of it all. © Copyright 2008 The Video Game Critic. 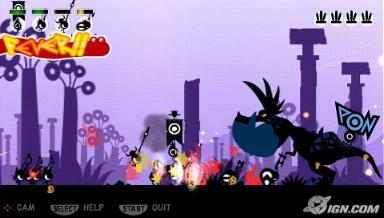 Patapon has an intriguing premise, but the execution leaves much to be desired, especially for a portable title. Patapon marries rhythmic music action with real-time strategy as you command cartoon armies by pressing button sequences with precise timing. The concept is original and clever, brought to life with humorous yet artistic visuals.

The action is purely 2D as you forge ahead on a side-scrolling screen where you engage other armies or large creatures. Your warriors look like little eyeballs with arms and legs, and they sing along to your "notes" in high-pitched voices. It's endearing when you're doing well, but irritating when things start to go south. Patapon has a pretty steep learning curve, and that's a shame.

The interface is confusing and it's hard to figure out how to make progress. The little guidance you get tends to be cryptic, often in the form of riddles. It took me a while to discover that collecting items was key to building armies, and it's essential to replay old stages in order to accumulate these. I must have failed level two a dozen times before realizing this!

Even when you get the basics down however, Patapon isn't particularly enjoyable. The simple button sequences are not hard to memorize individually, but switching between them can be a bit taxing on the cranium. It's especially hard to maintain your rhythm during a battle while you're trying to determine your next move. Patapon has a lot going for it, but fun gameplay is not one of them. © Copyright 2008 The Video Game Critic. 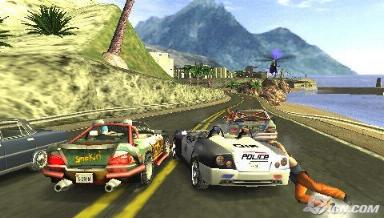 I was really rooting for Pursuit Force, if only because it's exactly what the PSP needed - a fun, arcade-style title made exclusively for the system. Like many PSP gamers, I'm tired of second-rate ports! Pursuit Force may be a one-trick pony of sorts, but you can't deny its original gameplay and top-notch production values. With slick sports cars and soaring city skylines, the gorgeous graphics have that certain polish that really makes an impression.

Likewise, the first-rate audio track features plenty of funny dialogue ("We're takin' you to the slaughterhouse, pig!"). Pursuit Force's gameplay is like every car chase you've ever seen in any action movie. As you weave through traffic in pursuit of the crooks, you can ram them, fire out your car window, or commandeer other vehicles. When in close proximity, you can leap onto the bad guys' car and pump lead right down their throats!

The controls are surprisingly straightforward, and there's even on-screen prompts to help you out. In addition to cars, you can man other vehicles including speed boats and motorcycles, and sometimes even run around on foot. You'd expect the steering controls to be ideal for the PSP's analog nub, but in fact I felt much more comfortable with the digital pad.

Pursuit Force is an action-packed, but it wasn't the addictive joyride I was hoping for. The missions are hit and miss, and despite the game's admirable attempt to mix things up, the action feels repetitive after a while. The highways are wide open, but you're often asked to make awkward, tight turns onto narrow streets. Pursuit Force won't set the world on fire, but it does take a unique concept and get a lot of mileage out of it. © Copyright 2006 The Video Game Critic. 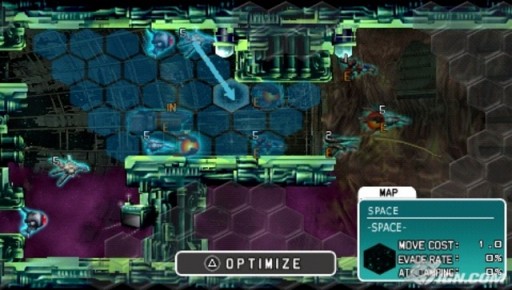 The name "R-Type" is synonymous with intense side-scrolling shooting, but like Metal Gear Acid (PSP, 2005), this fabled franchise arrives on the PSP as a turn-based strategy game. Who in their right mind actually asked for this?! As ill-advised as it may seem however, Irem almost pulls it off.

The idea is to navigate a squadron of ships around a hexagonal space map while trying to take out the CPU's flagship (before it can eliminate yours). You'll outfit your squadron with a variety of fighters, but they all tend to look very similar.

The well-designed interface makes it easy to move and attack, but the myriad of options can be overwhelming. There are some interesting strategic possibilities, like the ability to deploy decoy ships - and detonate them. Certain ships can resupply others, and "force units" can combine with other ships to augment their power.

The graphics are sharp but extremely tiny, and I had to use my reading glasses to discern the text. The battles are peppered with action-packed cut-scenes, but waiting for them to load bog things down, so eventually you'll disable them. R-Type Command is not a bad game once you get a feel for it, but R-Type fans really should know what they're getting themselves into. © Copyright 2013 The Video Game Critic. 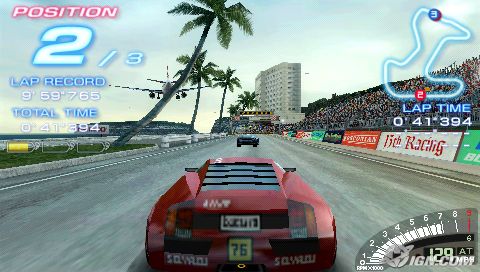 I've been a fan of Ridge Racer since it was the "pack-in game" for the Playstation One. But like so many PSP launch titles, this one has "retread" written all over it. It basically repackages tracks from previous Ridge Racer games (some enhanced), adds some cars, and incorporates wireless play. To newcomers, it's a good deal, but for Ridge Racer veterans, it feels awfully familiar. At the very least, Namco could have tossed in a few original courses (throw me a frickin' bone!).

Still, this certainly beats the stuffing out of that lame DS version. Embracing an arcade sensibility, Ridge Racer employs heavy drifting to provide pinpoint steering, and turbo boosts are earned in the process. This is one of the few PSP titles where I felt completely comfortable using the analog nub over the digital pad. The heart of the game lies in its "Tour" mode, which offers a series of challenges of increasing difficulty.

But as fun as Ridge Racer is on the console machines, it proves to be a less-than-ideal portable experience. The races tend to run too long, and many require you to finish in first place. There's a truckload of loading screens and menus to page through before each race - hardly ideal for gaming on the go! The rear-view mirror is visible in the first-person view, but not in the more playable third-person view. Why?

And while the graphics are generally above reproach, cars in the distance tend to bleed in an unsightly manner. The turbo boost effect is little more than a blur, and the Rally-X-style "status updates" are just distracting. The music generally sucks, and the commentator ("Awesome baby! Keep it up!") has got to go. If you're brand new to the Ridge Racer series, bump up the grade by a letter. Ridge Racer vets can knock it down a grade. © Copyright 2006 The Video Game Critic. 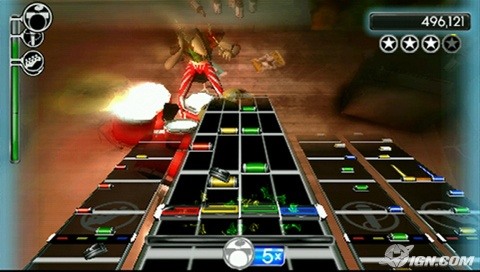 When I think of playing Rock Band on the PSP, I envision someone trying to stick a square peg into a round hole. How in the heck are you supposed to play one musical instrument on the PSP, much less a four-piece band? Well, Harmonix got creative and took a very innovative approach. The screen consists of four side-by-side "tracks" of moving notes, representing guitar, bass, drums, and vocals.

You only play one instrument at a time, and tapping the shoulder buttons let you switch between them. Upon successfully completing a section of notes your current instrument temporarily goes into an auto-play mode, giving you the opportunity to take over another instrument. It's a juggling act of sorts, but it feels satisfying as you gradually fill in the missing sounds.

Each instrument works the same as you hit four buttons in rhythmic time with colored notes moving down the track. The four buttons are mapped to left, up, triangle, and circle, and if you look at a PSP you'll see that this is a very symmetrical and intuitive configuration. The game's biggest flaw has more to do with poor hardware design than the game itself. The shoulder buttons are really awkward to tap quickly, and it tends to throw off your playing.

Even so, Unplugged is surprisingly fun, offering a musical experience that's both unique and gratifying. The track listing is exceptionally strong, serving up first-rate tunes like Buddy Holly (Weezer), Today (Smashing Pumpkins), White Wedding (Billy Idol), and Living on a Prayer (Bon Jovi). The music sounds crystal clear, so you'll want to crank up your headphones. It seemed like a long shot, but Rock Band Unplugged proves that a square peg can fit into a round hole after all. Go figure. © Copyright 2011 The Video Game Critic.