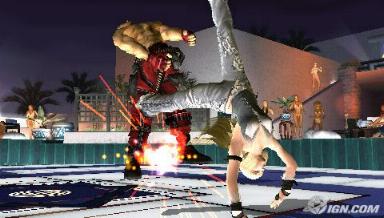 Dark Resurrection is a first-rate, 3D, one-on-one fighter for the PSP, but if you've played any of the other Tekkens, you've already played this one. It kicks off with an impressive opening cinematic culminating with Heihachi rising from his grave. Resurrection boasts an unprecedented number of fighters (37 in all), and thankfully they're all available immediately. All the classic Tekken characters are included, including oddities such as the wooden man and polar bear. Thanks to the small but sharp PSP screen, the characters look as crisp and detailed as they did on the PS2.

Stages like the vertigo-inducing space station look great, but like the music tracks, most of the stages are surprisingly understated. Tekken Resurrection's controls are quite good, with excellent digital pad control and responsive buttons. Even pulling off throws (by hitting two buttons at once) works like a charm. For better or worse, there are a lot of combos and air-juggles. I really like how the game tracks each character's stats, but with so many characters to keep straight, I wish they'd keep the names displayed on the screen during battle.

In addition to story and arcade modes, there's an "attack mode" that lets you unlock mini-games. The new "Dojo" mode lets you take a fighter and ascend the ranks, but I found it confusing and somewhat pointless. Let's face it - these modes are all just slight variations on the basic arcade mode.

Dark Resurrection is a quality title, but it left me with a "been there done that" feeling. It's just the same old Tekken we've played a hundred times before, and without a graphical upgrade. If you're already burnt out on Tekken you'll want to knock the grade down by one letter. If you're new to the series however, feel free to bump it up by one letter. © Copyright 2007 The Video Game Critic. 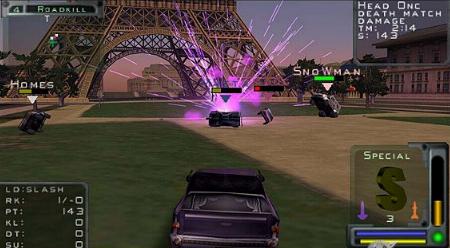 Most early PSP titles were uninspired ports of old Playstation games, and this Twisted Metal incarnation is a prime example. Head On looks like a rehash of the original games that appeared on the Playstation One, only with worse controls and half of the fun. The stages are definitely stale, offering familiar locations like a baseball stadium, the streets of Paris, and the freeways of LA (yawn).

There's still all the frantic car combat action we've come to expect, but this time it's too chaotic, and most of the vehicles handle poorly. There are far too many "portals" integrated into the oversized stages, making it easy to get lost.

For all of its faults however, Head On does do a few things right. The machine guns are more effective than in previous games, and there are some enjoyable "crash-up-derby" bonus stages. But in general, Head On will probably not hold your interest for long, and series veterans will feel like they've "been there, done that." © Copyright 2006 The Video Game Critic. 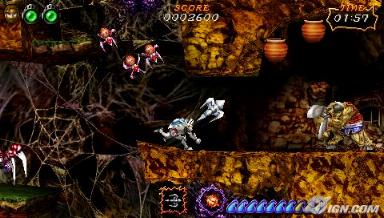 As a longtime fan of the Ghosts 'N Goblins (G&G) games, I've anxiously awaited this "Ultimate" edition for months on end. For the uninitiated, G&G is a classic side-scroller starring a knight forging his way through graveyards, burning villages, and caves while battling monsters and avoiding traps. This Ultimate version perfectly captures the visual and aural splendor of the series, with lush, gorgeous graphics and a first-rate orchestrated soundtrack. I'm grateful that Capcom retained the classic side-scrolling 2D style. For my money, this game looks better than just about any 3D game on the market.

The action never lets up as you're constantly ambushed by monsters, including ephemeral ghosts, club-wielding trolls, giant spiders, and man-eating plants. Yet in the G&G tradition, nothing appears without some kind of warning. It sounds like a dream come true, but don't ditch your Sega Genesis Ghouls and Ghosts game just yet! The number of objects attacking at any given time can be pretty insane, and I would question the designer's "more is better" approach.

Ultimate Ghosts 'N Goblins doesn't play nearly as well as it looks, mainly due to its abysmal controls. The old G&G games were always known for their extreme difficulty, but you could never blame the controls. In this edition, our hero takes long leaps instead of short hops, which is probably the worst idea since the New Coke. It's frustratingly hard to gauge your jumps, and you often leap right over the object you wish to land on - like the gravestone that's right in front of you!

The situation is further exacerbated by the painfully stiff PSP controls. It's really heart-breaking when you consider how much this game had going for it. Not only is it substantially longer than its predecessors, but you can save your progress between stages and there are tons of weapons, items, and secrets to uncover. Ultimate Ghosts 'N Goblins is still playable and very easy on the eyes, but sadly, it's not nearly as fun as it should have been. © Copyright 2006 The Video Game Critic. 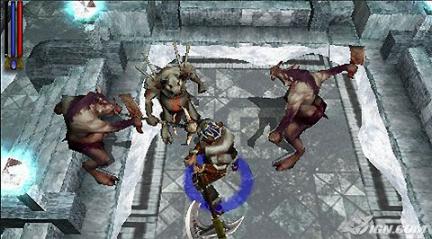 This PSP launch game is now a "greatest hits" title, yet Untold Legends has always seemed to remain under the radar. This overhead dungeon-crawler won't blow you away with its graphics, but it plays well and has an interesting storyline to boot. The action gets off to a slow start with a really mediocre first mission that sends you into a series of spider-infested catacombs. A game like this really needs to make a better first impression if it wants to draw the player in.

Once you get beyond the spiders however, Untold Legends delivers a pretty satisfying adventure. The battles offer a nice balance of magic, melee, and shooting attacks. You'll learn to draw foes out one at a time to avoid getting stuck in the middle of their gangs. An ever-present map in the corner of the screen makes it easy to navigate the dungeons, and your health meter reconstitutes when you remain out of harm's way for about 10 seconds (like Halo). The item management screens are extremely well designed, making it fun to juggle, combine, and upgrade items.

The graphics are so-so, with repetitive dungeons and minimally destructive environments. It's hard to make out the skeletons, and their lengthy death animations, although worthy of an Academy Award, really tend to confuse the action. If you wear headphones, Legends treats you to an ominous musical score and some fantastic audio effects. You can hear the ground crunching under your feet, monsters breathing down your neck, and the directional crackling of fire. Skeletons unleash blood-curdling screams upon their demise, and their bones crunch as they fall to the ground.

One issue I have with the game is the way monsters regenerate when you turn to old dungeons - I hate that. Also, although some monsters are very slow by nature, they tend to become world-class sprinters when you try to flee from them! One excellent feature is your ability to save your progress at any time. It's hardly Legendary, but Untold Legends is not a bad way to pass the time on your PSP. Maybe it's time we told somebody about it! © Copyright 2007 The Video Game Critic. 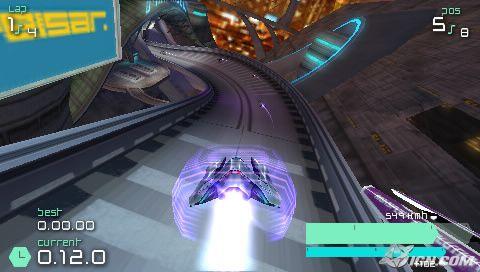 I raved about the first PSP Wipeout, Wipeout Pure (Sony, 2005) but despite making a grand first impression Pulse lost me somewhere down the line. The game exudes raw style with its crisp techno beats, sleek hovercraft, and clean futuristic environments. In terms of gameplay, Pulse picks up where Pure left off with exciting races around twisting tracks that will make you forget which way is up (does it even matter?).

The single player mode has a nifty new "grid format", which offers a group of challenges to complete in any order. In addition to normal races, there are a lot of solo challenges. Some are of the standard "time trial" variety, but in the "speed zone" you try to survive as long as you can in a constantly accelerating vehicle.

The controls are very nice, and although the analog works fine, I still feel more comfortable with the digital control. That's probably because that low analog nub causes my thumb to cramp up. The shoulder buttons allow you to "lean" into turns, and they work well. Learning the tracks is key, and you'll find yourself memorizing them after a few failed runs.

Pulse is madly addictive at first, but stumbles due to its emphasis on weapons in later stages. Weapons played a minor role in Pure, but here you'll be lucky to make it around the track in one piece! It's really hard to avoid incoming rockets and missiles, and those tiny mines are hard to see. Dishing out the pain is equally problematic, since most weapons require you to aim, which really throws off your steering. Other issues include substantial load times and in-game instructions that forget to explain the controls. Wipeout Pulse is a great looking game, but it suffers in comparison to the original. Let's face it - sometimes a sequel has no place to go but down. © Copyright 2008 The Video Game Critic. 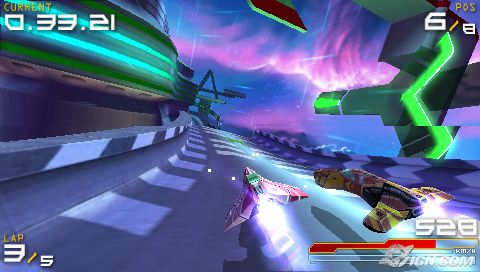 To be completely honest, I wasn't too keen on buying another version of Wipeout, considering I've played so many on my Playstation, Saturn, and Nintendo 64. But Wipeout Pure is the real deal. This isn't just a scaled-down version of an old Playstation title, like the PSP editions of Ridge Racer and Twisted Metal. No, Pure truly elevates the Wipeout series with awe-inspiring visuals, first-rate audio, and finely-tuned gameplay.

For those new to the series, Wipeout is a futuristic racer with vehicles that hover over gorgeous, winding courses. The tracks are wonderfully immersive, as you'll witness when you glide down the tropical track that plunges under the surface of the sea. Wipeout's weapons and power-ups are well balanced, and I especially love the "autopilot" item that lets you effortlessly navigate the trickiest sections of the track. Though equipped with a shield, it is possible for your vehicle to be destroyed. This adds tension, especially when you're running low on shields in the final lap.

Pure's audio features a lively techno soundtrack and a pleasant female voice that alerts you to upcoming hazards. The button configuration takes some getting used to (you need to release the accelerator to fire a weapon), and I'd definitely recommend the directional pad over the overly-sensitive analog nub. Wipeout Pure is easily one of the more addictive games for the system, and a true showcase of the PSP's power. It's just a shame Sony set the bar so high with this excellent launch title, because few PSP titles can even hope to match it. © Copyright 2007 The Video Game Critic.