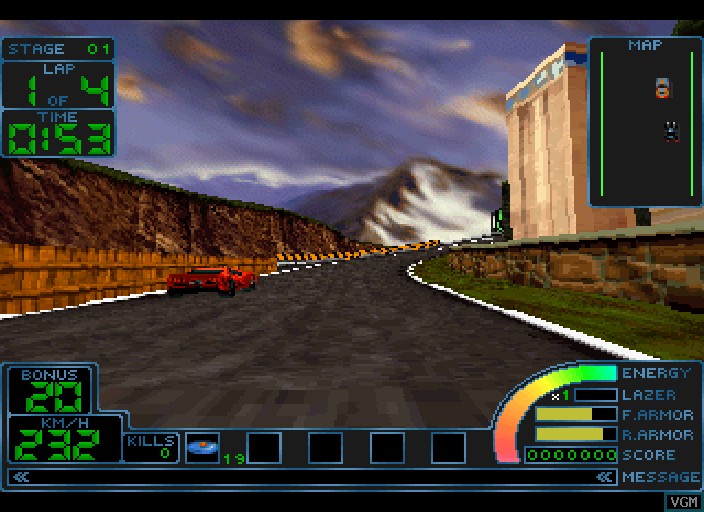 The runaway success of Twisted Metal (PS1, 1995) ushered in a glut of 3D car combat games in the late 1990s. Impact Racing's demo mode gave me false hope as I watched modern cars barreling down winding roads, launching missiles like a 3D Spy Hunter (Colecovision, 1984). The game offers a variety of colorful sports cars to choose from, each with their own payload, speed, and armor attributes.

Races are four laps long and your primary goal is survival. There's little in the way of scenery so you'll spend most of your time staring at tunnels, rocky gorges, and ice walls. Even the track running across floating asteroids is pretty unspectacular. At least the animation is smooth. The roads tend to be narrow so there's not much room to maneuver. That's fine because you'll mainly be blasting cars ahead and blazing through their wreckage.

The poor controls however seem to have been designed for another game. Your laser shoots frustratingly high, harmlessly passing over targets 80 percent of the time. Pushing up to accelerate is never fun, and the B button is a poor alternative because you have to let off the gas to use your weapons. Speaking of which, the best weapons like missiles and smart bombs are really hard to come by, so you're basically stuck with lasers and mines (ugh). The game's repetitive soundtrack is downright goofy at times. If you don't complete a lap within the time limit the game says "Time out!" Huh? I guess it makes sense, since playing Impact Racing makes me feel like I'm stuck in time out. © Copyright 2020 The Video Game Critic.

With its stylized sprites, immense firepower, and spectacular explosions, In The Hunt is the kind of title you'd expect to find on the Neo Geo. Some have even called it "Metal Slug Underwater". If you have a single old-school bone in your entire body, gazing at this gorgeous 2D shooter could bring tears to your eyes. Released at a time when 3D graphics were becoming the rage, this game eluded most gamer's radars.

Your yellow sub can simultaneously fire torpedoes forward (rapid-fire), launch missiles overhead, and drop mines below. The eye candy is amazing as torpedoes leave bubbly trails, splashes ignite the water surface, and mines trigger chain reactions on the ocean floor. Most enemies are underwater, but you can surface to engage airplanes and level buildings. The destruction quotient is pretty much off-the-charts as bridges collapse into the water, sending train cars plunging into the depths.

In The Hunt's soundtrack isn't remarkable, but it does call to mind those glorious days when 16-bit ruled. There's just one thing that prevents In The Hunt from achieving greatness, and that's the heinous slow-down that occurs when the action heats up. It's hard to ignore in the single-player mode, and it practically ruins an otherwise terrific two-player simultaneous mode. In The Hunt is a fun game, but it seems like the hardware is struggling to keep up every step of the way. © Copyright 2008 The Video Game Critic.

Find In The Hunt on eBay, Amazon, YouTube, Forums
Copy link to this review
Recommended variation: easy/continues
Our high score: 244000
1 or 2 players
If you like this game, try: Metal Slug (MVS) (Neo Geo),
Metal Slug 2 (CD) (Neo Geo), Metal Slug Advance (Game Boy Advance),
Ocean City Defender (Atari 2600), Metal Slug X (Playstation)
Incredible Hulk, The Pantheon Saga
Grade: F
Publisher: Eidos (1997)
Posted: 2002/9/3
Rating: Kids to Adults
This was made by the same company that did Tomb Raider? That's hard to believe, because this is one of the worst games I've seen! No wonder the Hulk is so mad - you'd be pissed too if your mug was slapped on this piece of garbage! In the idiotic background story, Hulk has been kidnapped by some space creatures and must smash his way out of their lair (whatever).

Just wait until you witness that incredibly blocky green mess that is allegedly supposed to be the Hulk. Actually all of the graphics in this game look pixelated and indistinguishable to the point where you feel the need to avert your eyes. The sound effects are muffled, and the background music consists of loud grinding guitars that only add to the agony.

As you wander around the monotonous 3D areas, you'll battle weak robots, solve inane lever puzzles, and take cheap hits from every direction. Every level is chock full of traps and unavoidable projectiles that only succeed in making the Hulk's life a living hell. After just a few minutes of playing this game, even I was enraged. © Copyright 2002 The Video Game Critic. 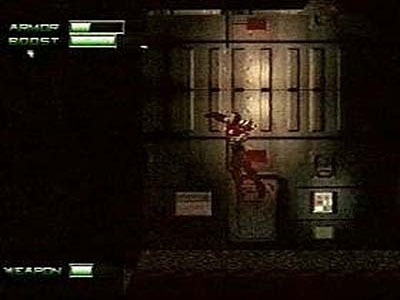 What's the deal with the long name? And who the heck is X-O Manowar? Oh well, it doesn't really matter. This game is just a second-rate platform shooter that provides an endless supply of cannons and generic thugs to blow up. Although there are a few fighting moves, you'll find yourself leaning on the fire button to dispatch just about everything. The best part of the game is the ability to fly and hover. That works pretty well, but the basic gameplay is redundant. The graphics aren't anything to write home about either, with the objects being blurry and pixelated. The levels are unoriginal and boring. Hey look - there's an elevator stage. Gee I've only seen that in every fighting game I've ever played! And at the end of each stage, you are awarded one ridiculously long password. I'd pass on this one. © Copyright 2000 The Video Game Critic.
Find Iron Man X-O Manowar in Heavy Metal on eBay, Amazon, YouTube
Copy link to this review
1 or 2 players
If you like this game, try: Meteoric Shower (Colecovision),
Crossbow (Atari 7800), Namco Museum Volume 1 (Playstation),
Pinball (NES), Strategy X (Atari 2600)
Johnny Bazookatone
Grade: F
Publisher: US Gold (1996)
Posted: 2013/3/14
Rating: Kids to Adults 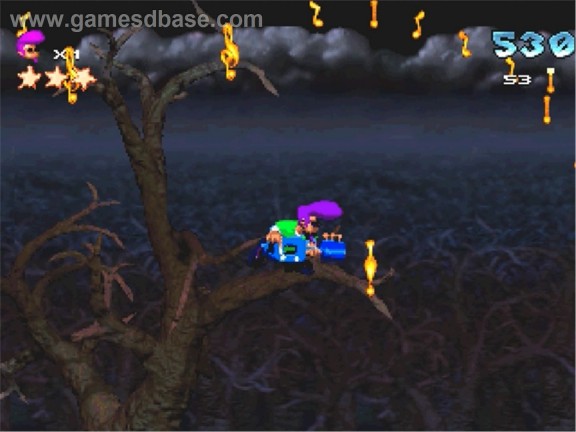 This stylish platform shooter conveys a moody, jazzy atmosphere not unlike Mr. Bones (Saturn, 1996). Johnny Bazookatone is a guitar-playing musician with a purple bouffant hairdo (Elvis style). His guitar can rapidly fire unseen bullets in any direction, and shooting downward propels him through the air. The dark, mysterious stages are rendered with plush, realistic textures, and locations include a penitentiary, hotel, restaurant, and hospital.

It shouldn't be hard to make a decent 2D platformer for the Saturn, but Johnny Bazookatone will have you believing otherwise! These stage designs are awful! There are green thorns (fatal to touch) all over the place and deadly pits hidden from view. You tend to get killed by things you assume are part of the background scenery. Mushrooms turn from helpful green to poisonous red for no apparent reason. In one stage I entered a door but after waiting a long time for the game to load, I was told, "you can't go there". What the heck?

The collision detection is atrocious; sometimes you can jump on a mushroom, and sometimes you can't. The clay-mation skeletons look pretty neat, but I hate how they tend to spring up from right under your feet. The small enemies can be hard to make out. Was I just attacked by a floating candle?

Lose a life and you have to restart the entire stage, which is bogus. Johnny's firepower is weak, and the charge attack is useless because it takes forever to power up. And don't even get me started with those slow-motion underwater stages. Blues music plays throughout Johnny Bazookatone, and it's appropriate considering how sad this game will make you feel. © Copyright 2013 The Video Game Critic. 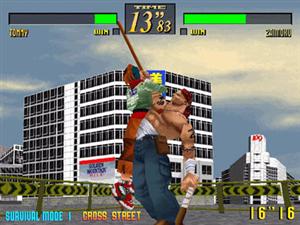 As Sega's weapon-oriented 3D fighter, Last Bronx plays much like Fighting Vipers, only without all the chunky armor and ugly walls. After playing all of the 3D Saturn fighters in succession, I can say with confidence that Last Bronx is easily the best looking and most enjoyable of the bunch. Each of the eight fighters wields a unique weapon, including nun-chucks, Billy clubs, sticks, and hammers. The well-animated fighters are fun to watch, and some matches resemble a well-choreographed Jackie Chan flick. The detailed, 3D graphics don't get much better than this on the Saturn, although the urban backgrounds aren't particularly interesting. The control is dead-on, and the anime introduction is far more fun to watch than the 3D rendered stuff in other games. With six modes and options to spare, Last Bronx is senseless violence at its best. © Copyright 2004 The Video Game Critic.
Find Last Bronx on eBay, Amazon, YouTube
Copy link to this review
1 or 2 players
If you like this game, try: Darkstalkers 3 (Playstation),
Soul Blade (Playstation), ECW Hardcore Revolution (Nintendo 64),
Fighting Vipers (Saturn), Battle Arena Toshinden (Playstation)
Last Gladiators Digital Pinball
Grade: D
Publisher: Kaze (1995)
Posted: 2012/1/25
Rating: Kids to Adults 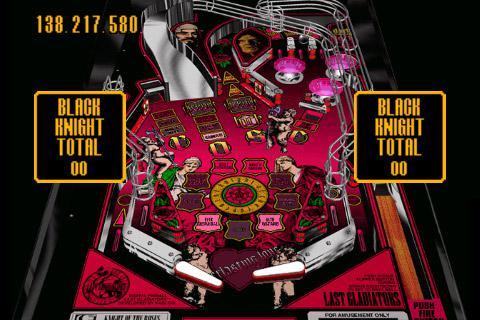 This game begins with footage of live actors posing in gladiator outfits as 80's hair-band music blares in the background. No, Last Gladiators has not aged well. The best part is how you can select between four tables, each with a medieval combat theme. I happen to be a big pinball fan so I was willing to give this a fair shot.

The tables look sharp but their designs are pretty unimaginative, and what's up with the limited color palette? It's hard to make out the details of the table, and those lights are impossible to read. There aren't many targets to shoot for, and it's easy to nail the same one again and again. The flippers are responsive, but there's no plunger control. You can nudge the table by hitting the shoulder buttons.

The physics is a little funky, and it's not uncommon to see the ball come to a complete stop - something unheard of in real pinball. The best part of the game is the frenetic multi-ball modes. Monochromatic animations do a nice job of emulating the LED display of real pinball games, but in general it's hard to tell what's going on.

The game tries to offer hints via pop-up boxes, but they often obstruct your view. The digitized voices sound murky and the non-stop guitar becomes mind-numbing after a while. High scores are recorded for each table. Last Gladiators will mainly interest pinball fans, and even they may find it hard to get excited about this. © Copyright 2012 The Video Game Critic.