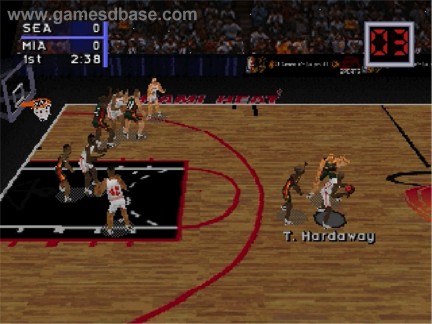 Electronic Arts waited a few years before releasing their basketball games for the Saturn, and it was hardly worth the wait. This sloppy version makes the Playstation edition look like a masterpiece by comparison. NBA Live 97 looks ugly, sounds horrible, and the gameplay is a mess. The players are composed of rough polygons and look terribly blocky. The animation is far from fluid, as the ball jumps around and magically appears in a player's hands. It's actually hard to tell what's going on! The sound is minimal, with a steady water-faucet crowd and brief comments provided by the announcer after each basket. Even the control is horrendous. Players move much too fast and don't stop when you want them to. Are they playing on ice or something? To round things out, the computer AI is weak, the dunks are unspectacular, and the loading times are painfully long. You'll be reaching for your old Genesis after playing this garbage. © Copyright 2000 The Video Game Critic.
Find NBA Live 97 on eBay, Amazon, YouTube
Copy link to this review
1 to 10 players
If you like this game, try: NBA Live 96 (Super Nintendo),
NBA Live 96 (Genesis), NBA Live 2005 (Playstation 2),
NBA 2K2 (Dreamcast), NFL '97 (Saturn)
NFL '97
Grade: F
Publisher: Sega (1996)
Posted: 2000/8/21
Rating: Kids to Adults 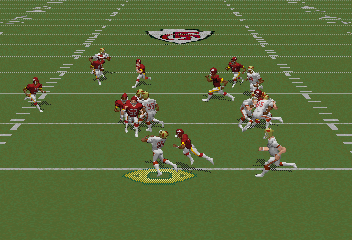 The only positive thing I can say about NFL '97 is how much it makes me appreciate my Madden football games. NFL '97 may quite possibly be the worst football game I've EVER played. Relative to the 32-bit system it runs on, it's an utter disgrace. The big-headed players look so ridiculous that you won't believe your eyes. The pixelation is horrible and the generic stadiums lack any degree of detail. And as bad as the graphics are, the gameplay is even worse! The players move slow and the control is sluggish. An idiotic passing/kicking system shows the path of the ball BEFORE it's thrown. This is not only the worst idea ever for a football game, but the muddled graphic representation looks like crap. While playing the computer, time automatically runs off the clock before each play, and while this is intended to speed up the game, it makes controlling the clock impossible. The crowd sounds like a steady faucet, and there's no voice commentary at all. Sega released some fine football games 5 years earlier on the Genesis, so how they could release this piece of garbage is a mystery. This was supposed to compete against Sony Playstation's NFL Gameday? © Copyright 2000 The Video Game Critic.
Find NFL '97 on eBay, Amazon, YouTube
Copy link to this review
1 to 8 players
If you like this game, try: Madden NFL '96 (Super Nintendo),
Madden '93 (Genesis), Troy Aikman Football (Genesis),
Madden NFL 2000 (Playstation), Madden '97 (Genesis)
NHL 97
Grade: D-
Publisher: Electronic Arts (1996)
Posted: 2005/2/13
Rating: Kids to Adults (animated violence) 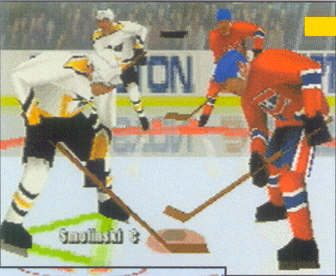 During the mid-90's, sports games were transitioning from 16-bit 2D to 32-bit 3D technology, and it wasn't painless. Many games went from being fast and smooth to slow and choppy. As if being an early polygon sports title was bad enough, NHL 97 had the additional burden of running on the 3D-challenged Saturn. All things considered, this could have turned out far worse.

The players look crude and blocky up close, but once the camera pulls back they don't look so bad. What's most important is that the action is fast and the frame-rate keeps up, allowing you to follow the puck without too much difficulty. The default camera is in constant motion but does a fair job of providing a decent angle. The ice surface looks realistic enough, but what's the deal with those puny goals? They certainly don't look regulation size, which may explain why it's so frickin' impossible to score.

I'm no slouch at hockey games, but I played this game several times and failed to score a single goal. Shots on goal seem awfully soft, even when you hold down the C button. Outside of the playing surface, the scenery looks downright hideous. The glass around the rink looks like a white-checkered pattern, and the crowd is a static, brown pixelated mess.

Between periods, live video of a bald guy named John Davidson recaps the action. As you can imagine, his canned, generic comments provide no insight whatsoever, and it's not unusual for him to repeat the exact same "analysis" for two periods in a row. Chalk that up as another failed 32-bit video game experiment.

NHL 97's single bright spot is its audio. Its crisp sound effects put those fuzzy Genesis noises to shame. Organ music plays during the action, and I love the techno music that plays over the menus. NHL 97 may be just another monkey in the evolution of hockey games, but I've played worse sports games on the Saturn. © Copyright 2005 The Video Game Critic. 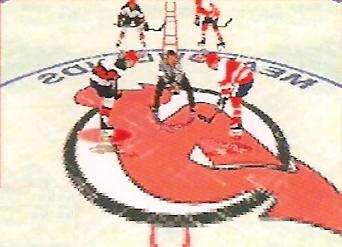 My buddy Eric got a Saturn for Christmas in 1995, along with this video game equivalent of a lump of coal. For weeks Eric rationalized that NHL All-Star Hockey wasn't bad, but he eventually would admit it was awful. Twelve years later Eric and I revisited the game so he could reassess his opinion of it. He now regards All-Star Hockey as repugnant. Sadly, this game set the tone for sports titles on the Saturn, which consistently paled next to their Playstation counterparts.

All-Star Hockey's ugly intro intermingles game graphics with video clips as "The Power" blares away in the background. I can only assume that Sega intentionally made the video clips extra grainy so the game's dreadful graphics would look halfway decent by comparison. The main menu looks sharp, thanks to a digitized Marv Albert who prompts you to select a game mode. Sadly, his talent is wasted because there is no in-game commentary.

On the ice, the low quality of the graphics is glaring. These flat, pixelated players would be more at home in an Intellivision game! The animation is so minimal that players will go from standing positions to flat on their backs in two frames! There's a wide range of selectable camera angles, but none provide a decent vantage point, and most aren't even playable! Even at the closest camera setting, you feel distant and never have a good angle of the goal.

All-Star's control is pitiful, and the act of shooting the puck is needlessly complicated. The action is so choppy that when a goal is scored, you'll find yourself wondering what the heck just happened. The crowd sounds realistic enough, but the player grunts are repetitive. After the first period, some fat guy named Coach Labou rants about how badly you suck - even when you're winning.

There are plenty of options and modes, but would you really want to customize your roster in a game this bad? The best thing about NHL All-Star Hockey is its edgy menu screen music. If you get a chance to pick this game up, then by all means do. It will give you renewed appreciation for every other sports game ever made. © Copyright 2007 The Video Game Critic. 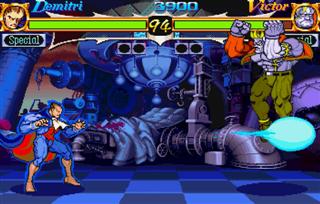 There's an interesting story behind this game. Capcom originally made a deal with Sony to release their Darkstalker games exclusively for the Playstation. However, in a rather sneaky maneuver, Capcom circumvented the deal by calling the sequel "Night Warriors" and thus was able to release it on the Saturn. Since the Saturn is well-equipped for 2D games, Night Warriors looks particularly sharp and plays slightly better than its Playstation counterpart. The control is crisp, and there are four additional playable characters. You'll recognize two of them as the bosses from the first Darkstalkers, and the other two are a vampire hunter and a freaky "Chinese ghost" that looks like a girl with long arms. Like the first game, there are some incredible babes here including Morrigan (busting out all over) and Felicia (if she didn't have the legs of Hulk Hogan, she'd be pretty cute). The animations are always entertaining, and there are tons of crazy moves. Night Warriors is great fun, and stands as one of the premiere Saturn fighters. © Copyright 2002 The Video Game Critic.
Find Night Warriors - Darkstalker's Revenge on eBay, Amazon, YouTube
Copy link to this review
1 or 2 players
If you like this game, try: Darkstalkers 3 (Playstation),
Darkstalkers (Playstation), Capcom Fighting Evolution (Playstation 2),
Spy Hunter (Game Boy Advance), Battle Arena Toshinden Remix (Saturn)
Nights Into Dreams
Grade: A-
Publisher: Sega (1996)
Posted: 2005/1/11 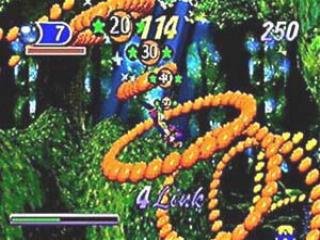 In 1996, Sega's Saturn console was on the ropes against the upstart Sony Playstation. Making matters worse, Sega failed to deliver a Sonic the Hedgehog game (their flagship franchise) to demonstrate the system's true capabilities. Rumors ran rampant however that the Sonic team was hard at work on a "secret project" that would restore Sega's rightful place as industry leader. That game turned out to be Nights Into Dreams, a beautiful and stunningly original creation that was so innovative that it came with its own controller!

The main character resembles a purple jester who effortlessly flies through magical, dreamlike worlds that bring to mind Alice in Wonderland. It's a pleasure to glide through rings, burst through obstacles, and collect "chips" by encircling them. While the graphics are pure 3D eye candy, Nights is played on a 2D plane, similar to Pandemonium (Playstation). Stages are cleared by depositing a certain number of blue chips into a large globe-like creature, causing it to explode.

Nights is best played with Sega's "3D control pad", an analog controller that looks like a black version of the Dreamcast controller. It's highly recommended due to all the "rolling" motions you'll need to perform with the directional pad. Although the Saturn's 3D graphic limitations are reflected in some blocky objects and pixelation, Night's fluid animation and shifting camera angles often border on breathtaking.

The game is full of surprises, including a wild sled ride in the snow stage. Completing a stage is not difficult, but earning a decent grade sure is. Each stage ends with a boss confrontation that tends to be bizarre but innovative. Instead of "attacking" the gigantic beasts as you'd expect, you can pick them up and hurl him into the scenery! The game's happy, upbeat music is high quality and pleasant. Nights may take a while to grow on you, but there's no denying the game's unconventional genius. Ultimately it failed to resuscitate the faltering system, but it's a title many Saturn owners will always cherish. © Copyright 2005 The Video Game Critic.