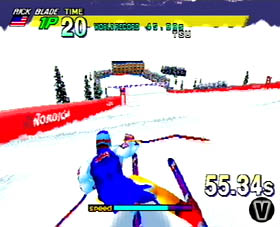 When I pulled this game off my shelf recently, I could have sworn that I'd reviewed it before. Sure enough, upon loading it up and viewing the rankings, I saw high scores achieved by me and my friend Steve dated last February! That's right - not only does Winter Heat save the initials of the high score/world record holders, but records the dates as well! That's awesome.

Despite its age, Winter Heat stacks up to be the most enjoyable winter Olympics game ever made. There are eleven events, and only two buttons (speed and action) are required to play. The A and C buttons are both assigned to "speed", so you can tap them in tandem. Each event is preceded by some brief instructions, and the loading times are minimal. The events are so short, so it doesn't take long to play the entire circuit. Not only can you compete against up to six friends (via the multi-tap), but you can also play the game for high score.

The graphics are cheerful and bright, exuding a polished arcade look. The athletes include some huge Scandinavian dudes, but also some cute snow bunnies. The snow-covered trees and pixelated spectators look chunky, but the distant mountains look beautiful, and the look and feel of a frosty environment comes across well. Although the digital controls are somewhere harsh for events that require finesse, they are certainly responsive.

Events like the downhill and bobsled convey an exciting breakneck sense of speed. Several events allow two players to race at the same time, including speed skating, cross-country, and slalom. After the winner takes the podium, you're treated to highlights of his performance as the credits roll. High scores are saved automatically. Winter Heat is an outstanding Saturn title, and I really can't recommend this game enough to fans of winter sports. © Copyright 2007 The Video Game Critic. 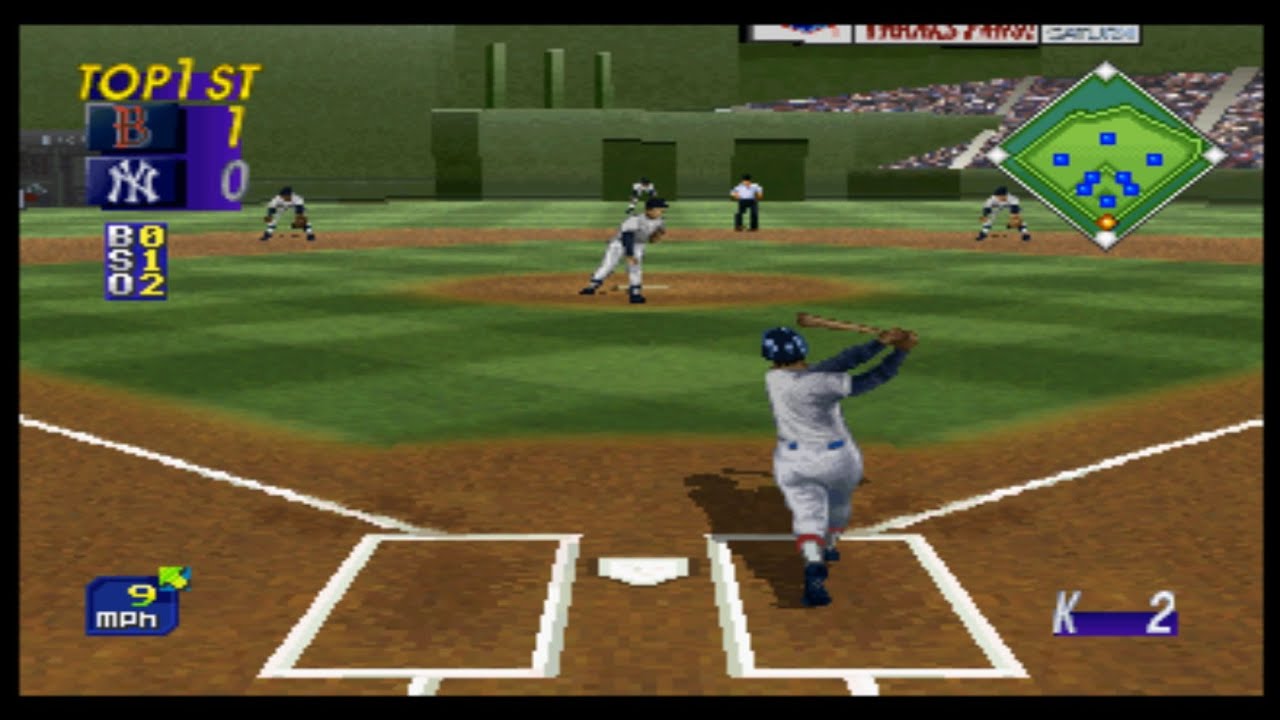 As the first baseball game for the Saturn, World Series has aged well, but it didn't exactly set the world on fire upon its release. At the time, the Playstation was breaking ground with its 3D polygon games, and World Series still employed scaling digitized sprites - small and grainy ones at that.

Only four stadiums are included (Fenway, Wrigley, Astrodome, and Yankee), and there is no instant replay (an unforgivable oversight even in 1995). The crowd consists of some ugly pixelated squares, and the commentator is worthless. The umpire yells "Strike!" in the most irritating manner imaginable, and you can't shut that bastard up! Then there's the problem of the ball not appearing to make contact with the bat for many base hits. Apparently the game thinks that bat is a few inches longer than it really is.

But beyond these cosmetic issues, World Series Baseball plays like a champ. The controls are crisp, and the smack of the ball against the bat or glove is really satisfying. Exaggerated diving controls make snagging fly balls a lot of fun. The game moves along at a brisk pace, so you can play nine innings in about a half hour. World Series Baseball overcomes its technical shortcomings with an intangible element of fun that's hard to nail down. I would have liked to have seen more pageantry (like a seventh inning stretch), and a lot more options, but at its core, World Series is a quality ball game. © Copyright 2007 The Video Game Critic.

As good as it is, the only thing World Series 2 really has to offer over its predecessor is the inclusion of all of the major league ballparks (compared to four in the first game). I have to hand it to Sega - they really did their homework in designing these meticulously detailed, well-proportioned stadiums. They're fun to look at, and they add a new dimension to the gameplay (literally).

Unfortunately, Sega didn't bother to make any other improvements, so all of the faults of the first game persist - and stick out like a sore thumb. The collision detection remains spotty, the umpire will get on your nerves, and there's still no instant replay! Sega made a lame attempt to liven up the commentary, but you'll wish they hadn't. With idiotic lines like "That was a great pitch! What will he throw next?", you'll want to shut his ass off altogether.

The behind-the-batter camera has been moved slightly off-center, but I really don't see any benefit to it. When playing the CPU, the camera zooms in on fielders slightly, but it just emphasizes their pixelation. Sega clearly got lazy with this one, but with its slick controls and minimal lulls in the action, World Series 2 remains one of the more enjoyable baseball games out there. © Copyright 2007 The Video Game Critic. 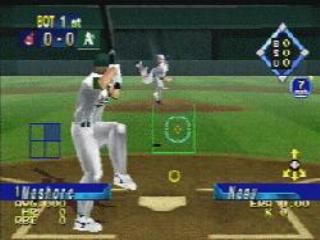 With World Series Baseball 98 (WSB98), Sega finally fulfills the promise of the Saturn system. The game is now rendered using genuine 3D polygons which remarkably do not compromise the fast, fluid gameplay that's distinguished the franchise. The player models may look chunkier than their Playstation counterparts, but the animation is superb.

The new 3D visuals allow for TV-style camera angles including players stepping up to the plate and dramatic collisions at home plate. Pitchers and batters possess the same mannerisms as their real-life counterparts, so baseball enthusiasts will recognize their favorites easily. The pitching and batting system has been overhauled and is much more sophisticated.

The pitcher can precisely aim the ball, and the batter moves a target to direct his swing. A useful and unobtrusive "guess the location" feature gives the batter an advantage if he can anticipate the correct quadrant of the pitch. These new mechanics add depth but never impede the brisk pacing of the game.

The weakest aspect of WSB98 is its audio. There's a new umpire voice, but he's just as annoying as the last guy, and you still can't shut him up! The commentator is less irritating but still dumb ("The ball goes hiiiiigh in the air!") Inexplicably, there's still no instant replay feature. But these gripes can't prevent World Series Baseball 98 from being a showcase sports title for the system, and one of the finest baseball games I've ever played. © Copyright 2007 The Video Game Critic. 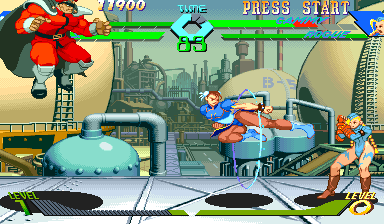 One area where the Saturn excelled over the Playstation was 2D fighters, and X-Men Vs. Street Fighter is a prime example. Granted, it requires a 4MB memory expansion cartridge (included) to deliver an arcade-perfect translation with no frame drops. Playing X-Men Vs. Street Fighter rekindled those feelings of wonderment I felt seeing this in the arcade for the first time. The ample eye candy, fluid animation, colorful characters, and high-flying combat are mesmerizing.

Modern fighters feature more complex fighting systems but pound-for-pound this reigns supreme. The character selection includes eight Street Fighter favorites: Dhalsim, Bison, Chun Li, Zangief, Cammy, Nash, Ryu, and Ken. On the X-Men side you have Magneto, Juggernaut, Sabretooth, Storm, Gambit, Rogue, Wolverine, and Cyclops. While the superheroes might seem to have an advantage, the characters actually match up pretty well. I am surprised however that Juggernaut doesn't inflict more damage considering his massive size.

The load times are well-masked by flashy intro graphics. Each battle is a two-on-two slugfest, allowing you to freely swap characters. The pacing, difficulty, and match length are just right. X-Men Vs. Street Fighter also has a vertical element you don't see in many fighters. I'm not sure how, but it's possible to launch yourself high in the air, causing the screen to zoom upward. This not only facilitates aerial attacks but offers breathtaking views of a towering Buddha statue and the Manhattan skyline.

The vibrant stages are rendered with a comic book flair with familiar characters lurking in the background. When the city street collapses into a sewer or when an industrial plant catches fire, it's almost sensory overload. The combo-rich fighting lets you get into a rhythm and there are plenty of unexpected attacks like Rogue's kiss.

The games do overscan a bit on my TV, making it a little difficult to see the edges. After each game you can rank in with your initials which are automatically saved. It's a shame this Saturn version of X-Men Vs. Street Fighter was never released stateside because when it comes to 2D fighters this one is hard to beat. Note: I play this using an Action Replay 4M Plus cartridge. © Copyright 2018 The Video Game Critic. 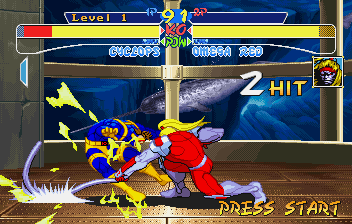 Children of the Atom is regarded by many as "the one that started it all." This arcade extravaganza would usher in a new breed of game that applied the Street Fighter formula to superheroes. You might be tempted to write off X-Men: Children of the Atom as old and outdated, but don't be so hasty! Its cast of characters includes five X-Men (Wolverine, Psylocke, Cyclops, Storm, Iceman, Colossus) and six villains (Spiral, Silver Samurai, Omega Red, Sentinel, Juggernaut, Magneto). Two of the villains (Juggernaut and Magneto) cannot be selected by the player.

All of the characters are bright and colorful, and a few of the villains are positively huge! The control scheme incorporates three punches, three kicks, a run button, and a super jump. Most special moves are simple quarter-roll movements, and when your X-Power meter fills up you can unleash hell. The super jump is kind of a big deal because the action often moves far above the ground, and certain characters even have the ability to hover or fly. This dynamic makes it important to know which attacks aim downward and upward.

The battles are action-packed but occasionally the animation is hard to follow and the collision detection can be a little off. The stages feature gorgeous venues like a sunny beach, an undersea headquarters, and the deck of an aircraft carrier. The scope of this game is limited but that works in its favor. The character selection doesn't feel overwhelming and it's fun to compete for score in the arcade mode. The slower pace encourages more strategy and less button pounding. Children of the Atom may be old, but it's spry. © Copyright 2013 The Video Game Critic.