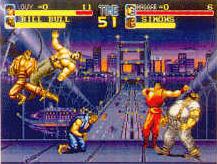 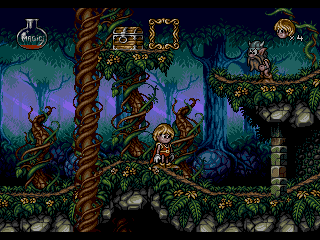 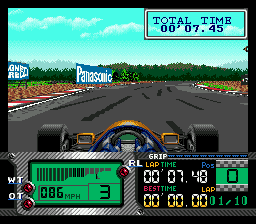 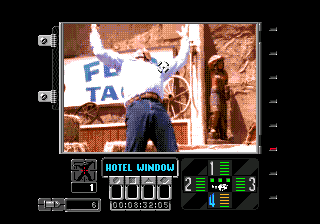 Like the CD classic Night Trap (Sega, 1992), this full-motion video title lets you toggle between cameras at various locations. Ground Zero Texas is far more linear however, playing more like a first-person target-shooter.

During the intro you're being flown into a small desert town on a helicopter where you're met by some military types. After being transported to the hotel base of operations you're briefed on the situation. Apparently the local population has been infiltrated by aliens who assume the form of normal townsfolk.

Four cameras are aimed at a cantina, hotel, plaza, and main street location. Unlike Night Trap, you're constantly being alerted where the action is occurring, there's no reason to explore. Once you select a location you just move a cursor around the screen and shoot anyone who points a gun at you (hint: they'll also have a green box around them).

The storyline is conveyed via cutscenes with dodgy characters that may be good or bad. You really need to stay on your toes because some of the most unlikely bystanders will suddenly pull out a gun. The hostage scenes are especially pivotal because saving one rewards you with a code you'll need later.

Since there's not enough "acting" stages to fill an entire game, Ground Zero is padded with generic stages with people popping up behind static scenery, not unlike Lethal Enforcers (Konami, 1993). The death animations are amusing to watch, with actors throwing themselves backwards, arms flailing.

What gives Ground Zero Texas a much-needed edge is its difficulty. Trying to aim that touchy reticle with any precision is tough, even when you know where the next enemy is about to appear. Should you accidentally shoot an innocent bystander, it's game over.

Advanced stages add another layer of strategy. When action occurs on multiple screens you'll need to deploy "shields" to protect unattended cameras. Enemy randomization enhances the replay value, but the game could really use some light gun support.

There's a certain charm in Ground Zero Texas. You tend to advance a little further with each play and it's fun to watch the cheesy alien plot unfold. The game may be shallow and grainy but hey - it's a Sega CD title. You can't blame a tiger for being a tiger. © Copyright 2021 The Video Game Critic.