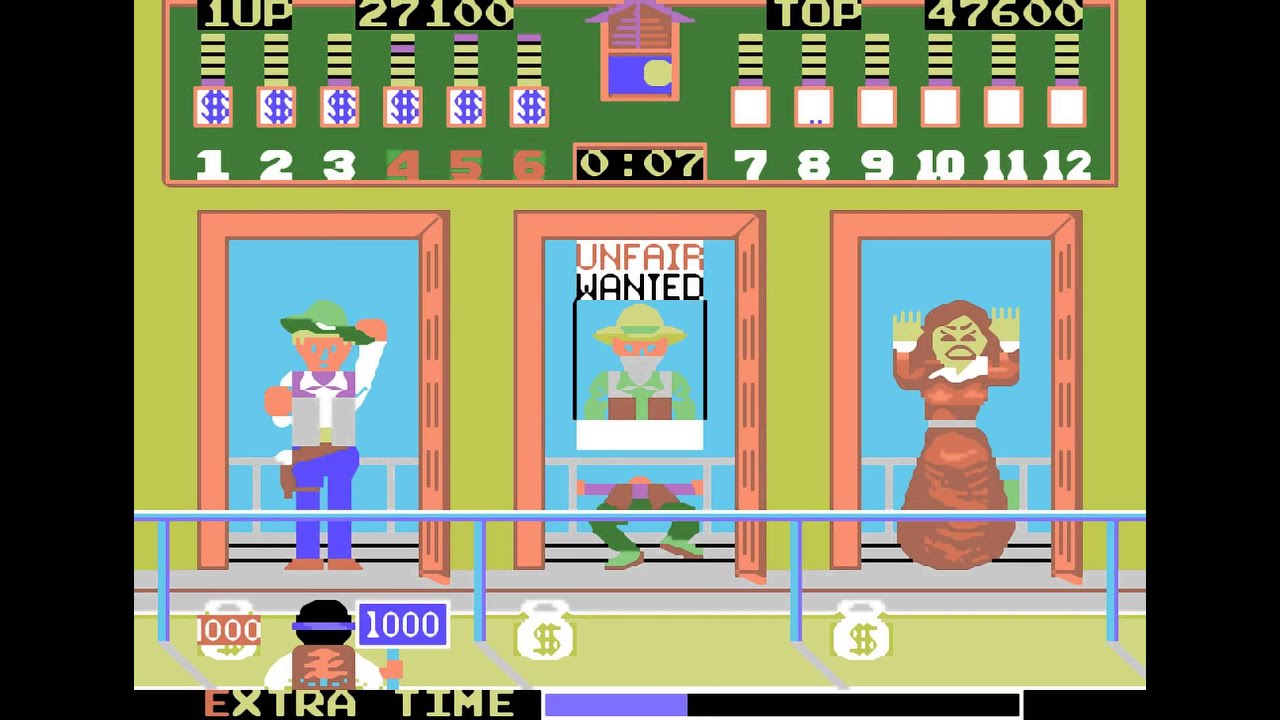 Bank Panic is a fun, original target shooter set in the wild wild west. You're a cowboy playing from a first-person perspective, and you need to be quick on the trigger. Before each round you're presented with a wanted poster alerting you to the outlaw you're looking for. The gameplay consists of scrolling sideways past twelve doors, with three displayed at a given time. Periodically they'll open to reveal an innocent civilian, an outlaw, or a dude wearing a stack of hats you can shoot for bonus points.

You fire left, center, and right by pressing up, button 1, or button 2. The system works like a champ once you get used to it. It's satisfying to shoot the outlaw, watching him fall back as his wanted poster unfurls in front of him. A civilian might be a cowboy or a lady in a red dress, and they'll reward you for not shooting them. It's such a good feeling to watch doors open and people hand you cash for nothing! Occasionally however a seemingly innocent person is really the outlaw in disguise, so stay alert for anything fishy. In addition, sometimes it takes two shots to kill that bastard.

Once you collect money from all twelve doors the round ends and bonuses are tabulated. One thing annoying about the game is the "Dixie" song playing throughout. It's a fine rendition but it gets repetitive. Adding replay value is the fact that can select which round to begin on. Bank Panic looks good enough to be a Sega Master System game, but apparently a more advanced version was released for that system. I can't imagine it being much better than this. © Copyright 2020 The Video Game Critic.

My friends and I became fans of Bomb Jack after stumbling upon it in Tecmo Classic Arcade (Xbox, 2005). This SG-1000 version is remarkably faithful, especially considering the hardware. On the surface Bomb Jack is about as simple a platformer as you can imagine. You leap between platforms collecting bombs while avoiding bats, snails, and gingerbread men that bounce around the screen.

Bomb Jack has a weird jumping mechanic. By holding up you can leap to any height, and holding in the jump button on the way down lets you glide sideways, which comes in handy for snagging rows of bombs suspended in mid-air. I feel like a little Superman flying around. The gameplay is easy to grasp and fast paced.

Be sure to grab any coins you see bouncing around the screen. They usually function as a power pill but if you're lucky one might award you with 100K on the spot! Color background graphics render famous landmarks such as the Sphinx, the Acropolis, and a German castle. One gripe is how the light blue platforms tend to blend into the colorful scenery. Aside from that Bomb Jack is just a really good time. © Copyright 2020 The Video Game Critic. 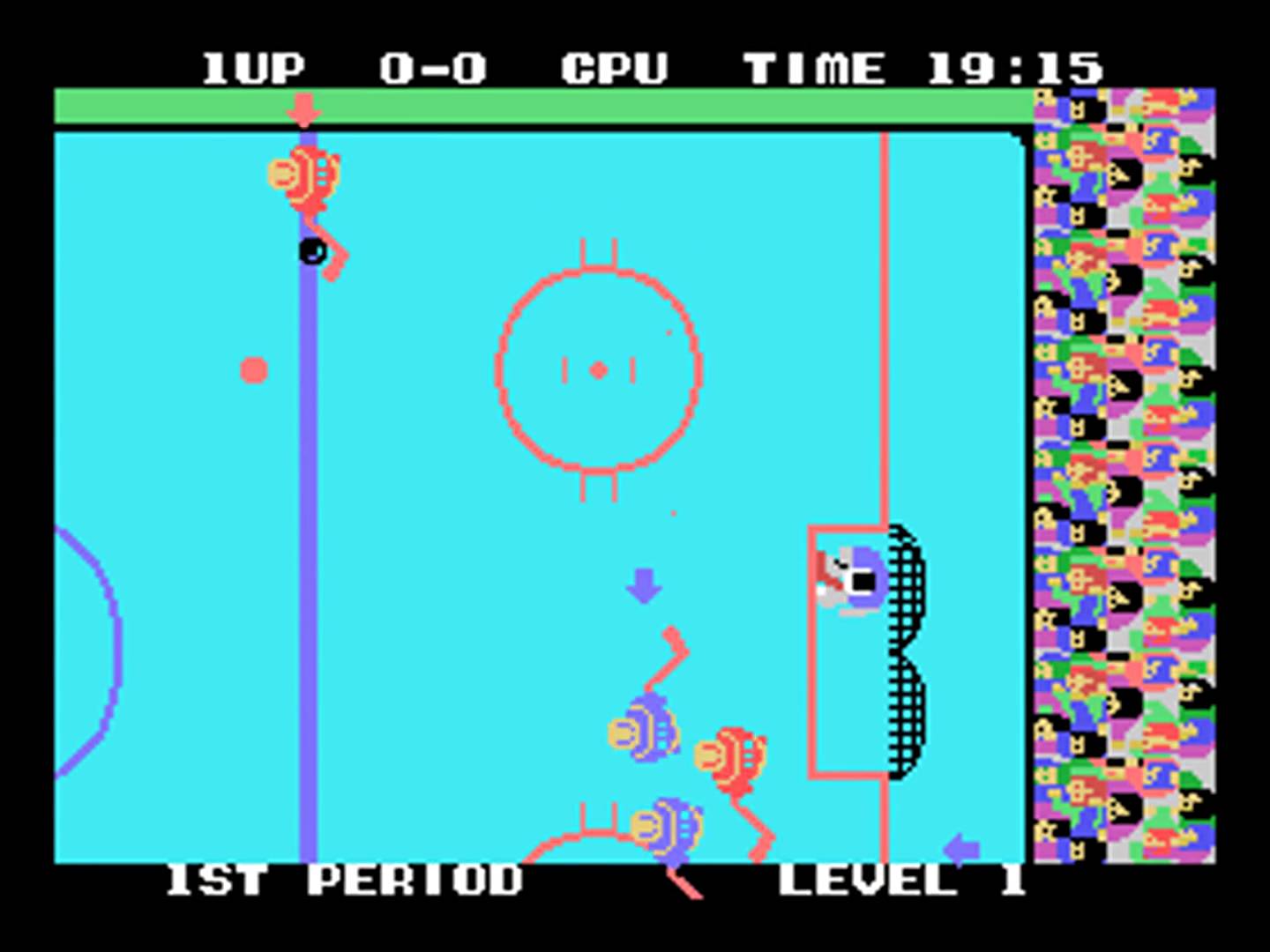 This is the best terrible hockey game I've ever played, if that makes any sense. From a technical perspective Champion Ice Hockey is just plain wretched. The players flicker, the collision detection stinks, and the speed of the game fluctuates wildly. The player you control is the one nearest to the puck, and it switches automatically. Colliding with any other player (including a teammate) causes you to fall over and lose the puck.

But the worst part is the abysmal side-scrolling, and believe me I'm being loose with the language when I call it scrolling. As you push against the edge of the screen the entire rink shifts in huge chunks, and it's unsightly to say the least. The oddly-shaped goals look like half the number 8, and the fact that both goalies are the same color (blue) is confusing.

Yet for all of its problems there's something about Champion Ice Hockey that kept me playing. I like how you view the action from overhead, with each player holding his stick at his side. You can easily toggle the stick from side to side which allows you to maneuver through defenders while maintaining control of the puck.

I also like how you control your goalie (when he's on the screen) by pressing up and down. Passing is ineffective but you can often take the puck the length of the rink on your own. Once you know the limits of the game and enter the acceptance phase, you might actually enjoy Champion Ice Hockey. © Copyright 2016 The Video Game Critic.

This wasn't the Congo Bongo I was expecting. In fact, I had to pop in the Colecovision version just to remember what the game is supposed to look like. The original plays like Donkey Kong with simulated 3D platforms, but here you view the action from the side. This makes the scenery look flat, as if you're playing a 2D platformer.

I still found the colorful graphics extremely attractive with the green palm trees, running waterfalls, and shimmering blue water. The gorilla at the top of the screen is nicely rendered in several colors, but he could really stand to lose a few pounds. The bongo music does a good job of getting you into a tropical mood.

So how does the game play? Well, the stiff SG-1000 controller doesn't do you any favors but the collision detection is forgiving enough, especially when it comes to avoiding bouncing coconuts. The monkeys tend to harmlessly latch onto you for a second or two. On the second screen you traverse square islands by crossing logs. You'll need to avoid black snakes which can be tricky because you don't have much room to maneuver.

I later discovered you can take shortcuts by riding lily pads, which is pretty cool. After the second screen it's back to the first, which is disappointing because I was expecting at least three screens. This version of Congo Bongo is still fun though, and the fact that it's so unique adds to its appeal. © Copyright 2016 The Video Game Critic. 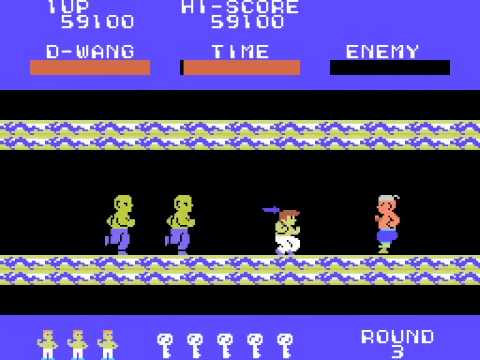 I knew this was going to be bad going in, but let's face it - a game called Dragon Wang is worth owning for the name alone. This side-scrolling kung fu game is seriously primitive and patently unfair. Your fighter's name is D. Wang. He moves in a stilted manner across generic platforms that all look the same with no background graphics. You defeat approaching henchmen using three attacks: kick, jump-kick, and squat-kick. The jump-kick doesn't seem to have any effect and the collision detection is so bad you might as well flip a coin.

Enemies tossing knives have an answer for everything. You jump and they throw high; you duck and they throw low. You're constantly taking mandatory hits. After walking to the right you'll eventually see a hole in the ceiling. Jump under it and you'll magically levitate to the next level as existing on-screen enemies disappear in a puff of smoke.

The first boss is armed with nunchucks and you just trade blows until he dies. The second boss however is a real bastard. He teleports all over and keeps kicking you in the back. I could never beat him, and dying at his hands sends you back to the very beginning of the game! You'll also have to deal with occasional hazards like trapdoors, floating orbs, and walls to kick through. Dragon Wang is a low budget brawler that's as laughable as its name implies. Its rumored sequel, Dragon Balls, was never released. © Copyright 2016 The Video Game Critic.