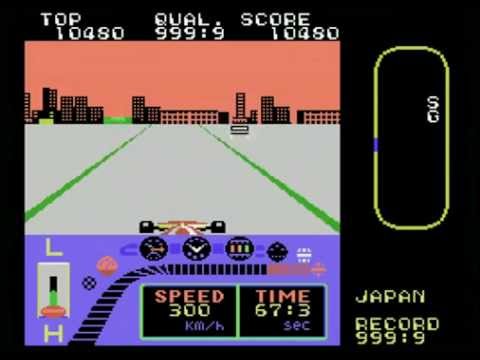 This Pole Position clone won't impress you at a glance. It offers a nice city skyline but the road is just a pair of green lines on a gray surface. Most early racers used stripes to convey a sense of speed. In GP World the only way you know you're moving is the glimmer of your tires and small objects passing on the side. The cars themselves look remarkably detailed and shiny once they scale into view. Three skill levels are available, each offering a series of tracks you need to complete by a qualification time.

I really like the idea of racing the clock because it limits the races to 2-3 minutes each. Passed cars net you bonus points, but only if you reach the finish line. You'll want to remain in low gear until you reach 100 kph, and then kick it into high gear to top out at 300 kph. Unfortunately it's really easy to accidentally slip back into low gear due to the mushy controls. The sense of speed is decent and you really feel like you're "hanging on" around corners.

GP World is forgiving in the collision detection department, so if you hit another car at low speed you just bump it instead of exploding. You see cars approach from a long distance so it's not hard to anticipate their movements. They tend to either stay in their lane or drift from side-to-side. Unfortunately these predictable patterns take much of the challenge out of the game.

The tracks are set in Brazil, Spain, and other exotic places but they all look the same. The time of day changes between races however, and I love that red sunset. The game even includes an editor that lets you create your own track! GP World is no classic but it's a solid racer that tries to go the extra mile. © Copyright 2016 The Video Game Critic.

Go Golgo! It's your birthday! Go Golgo! Okay, enough of that nonsense. Golgo 13 is a Japanese manga series starring a professional assassin who looks pretty badass on his title screen close-up. The game itself is different from anything I can recall, and that's saying something because I've seen quite a bit!

You move Golgo across the bottom of the screen in a red convertible, trying to shoot the windows out of a train moving in the distance. When you knock one out a hostage climbs out, waves, and runs to safety. Passing between you and the train are boxcars and trucks that can deflect your shots right back at you. It's often necessary to skillfully "thread the needle". In advanced stages a helicopter appears and begins firing heat-seeking missiles!

The perspective is good but that train animation is jerky. Between trying to keep an eye on Golgo, the train, and the helicopter, I thought I was going cross-eyed! The bright city skyline is gorgeous - one of the best I've seen. When Golgo's car blows up he leaps out to avoid injury, but what happened to his pants? Golgo 13 isn't the kind of game you can play for any length of time, but you have to admit the concept is pretty neat. © Copyright 2019 The Video Game Critic.

When I hear Hang On II I think of high-speed motorcycle racing with white-knuckle thrills. This version fails to deliver any of that. Like Pole Position (Atari 5200, 1983) you navigate a gray roadway bounded by red and white stripes. The colors are supposed to cycle to convey a sense of speed, but it's not very convincing. It feels more like you're racing in slow motion. The other motorcycles are a ugly lime green and the background scenery is sparse.

Stages include a seaside, desert, and city at night but there's little to see. That city skyline looks more like a castle. Pressing up or down switches gears, but it's too easy to accidentally switch gears while steering. If you find yourself slowing suddenly, it's probably because you accidentally slipped into low gear (perfectly normal for a man your age). Steering is tricky too. Once you hear that skidding sound you need to release the accelerator.

Sliding off the road causes you to immediately crash and burn. You always get a new motorcycle however, since the game doesn't end until the timer runs out. And that might be a while once you get the hang of things. This version of Hang On II is more of a finesse game, lacking a sense of excitement you want in an arcade title. © Copyright 2020 The Video Game Critic.

This is basically the same as the disappointing side-scrolling shooter James Bond 007 (Atari 2600, 1983). I always hated that game, beginning with its nonsensical animated intro. It's supposed to depict some kind of transforming car, but it looks cheesy and James Bond looks far too big to fit into that thing. The familiar 007 theme song is the only thing this game has going for it.

Each of its stages are based on various Bond films like Diamonds are Forever and The Spy Who Loved Me, but they are "cookie cutter" in ever way. You drive a vehicle toward the right while firing missiles, tossing mines, and jumping/diving past hazards.

The graphics are terrible. Why am I being attacked by traffic cones? The best strategy is to fire with reckless abandon, which doesn't make your thumb feel very good. Failing to capture the spirit of the films to any degree, James Bond 007 strikes me as the worst kind of corporate dreck. © Copyright 2019 The Video Game Critic.