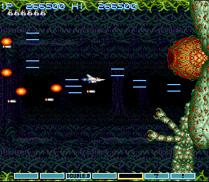 In the arcade, Gradius III was one of the most insanely difficult games you could ever encounter. The SNES version of this side-scrolling space shooter is much easier, which is probably a good thing. The key to the game is collecting pods to cash in for weapons and power-ups. There's quite a bit of strategy involved in selecting the proper power-up for the situation. The graphics here are nearly identical to the arcade, although slow-down rears its ugly head all too often and threatens to ruin the fun. When there are too many objects on the screen, the action slows to a crawl, only to speed up again when things clear out. Not only is this annoying, but it adversely affects the flow of the game. That's too bad, because otherwise this is a solid all-around shooter. © Copyright 2002 The Video Game Critic.
Find Gradius III on eBay, Amazon, YouTube
Copy link to this review
Our high score: 51100
1 or 2 players
If you like this game, try: Gradius III And IV (Playstation 2),
Gradius Galaxies (Game Boy Advance), Keystone Kapers (Atari 5200),
NBA Jam (Genesis), Sub Terrania (Genesis)
Hit the Ice
Grade: D-
Publisher: Taito (1993)
Reviewed: 2017/3/12 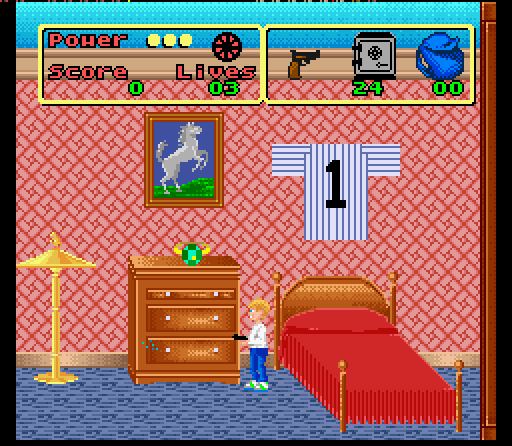 Exploring the house is fun as you scale shelves and jump on beds. Each room has a theme and the attention to detail (wallpaper, pictures, etc) is commendable. The cut-scenes incorporate digitized stills from the movie. The controls are crisp, but I really wish they had assigned "jump" to the lower button as most games do. It's easy to get confused. The audio effects are pretty sensational! Digitized sounds are sprinkled throughout and Christmas music gives the game a very festive atmosphere. Much like the movie, Home Alone for the SNES is a light-hearted romp that will bring out the kid in you. . © Copyright 2014 The Video Game Critic. 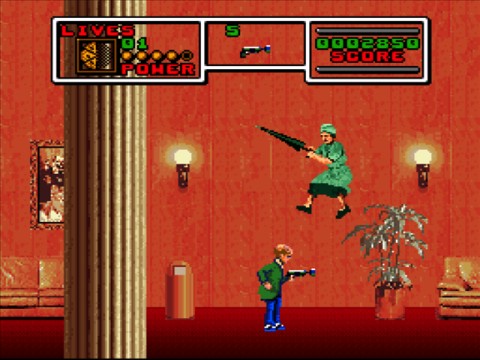