I'm really amazed by how well Scooby Doo Mystery turned out! Not only does it look and sound just like the TV show, it even plays like the TV show! You control of Scooby and Shaggy who move together as a team while gathering clues, encountering monsters, and making sandwiches. As you explore a pirate ship, carnival, or mansion (depending on the mystery), you'll often run into your friends Velma, Daphne, and Fred. Thelma explains the clues you find, Daffney supplys you with scooby snacks, and Fred offers hints on what to do next. The stories are actually quite linear, with new areas that open up gradually. Most of the puzzles are pretty easy. You'll have your share of exciting run-ins with monsters, and also engage in entertaining mini-games. The graphics are cartoon quality, with excellent music lifted straight from the TV show. Not only are the controls responsive, but the interface for interacting with characters is also well designed. I do have a few minor complaints. First, touching certain objects like rats will drain your life, but since Scooby and Shaggy don't react at all, you don't even realize you're losing health. Next, at the beginning of the second mystery I became very stuck, and that was no fun at all! Finally, since the mysteries always play the same, I suspect the game's replay value is pretty modest. At least a password feature is included so you don't have to replay old mysteries. All in all, Scooby Doo Mystery is a quality title that does a fine job of weaving a story into an entertaining game. And I probably would have given this an "A" if it wasn't for you snooping kids!! © Copyright 1999 The Video Game Critic.
[ Read More ]
Find Scooby Doo Mystery on eBay, Amazon, YouTube
Our high score: 2830
1 player
If you like this game, try: Scooby Doo Mystery (Genesis),
Scooby Doo: Night of 100 Frights (Xbox), Carnival Games Mini Golf (Wii),
Mansion of Hidden Souls (Sega CD), Jeopardy! (Super Nintendo)
Shaq Fu
Grade: F
Publisher: Electronic Arts (1994)
Reviewed: 1999/11/21 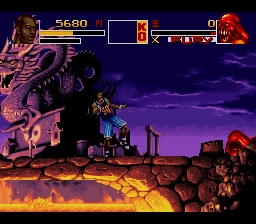 Apparently Shaquille O'Neil has an interest in the martial arts that he wants to inflict upon the rest of the world! Too bad for us! This shallow one-on-one fighter lets you play as Shaq himself performing Kung Fu against exotic warriors and occult creatures. At best, Shaq Fu comes off as a third-rate Street Fighter clone. Its design is typical, but the characters are surprisingly small and not very well balanced. Thanks to a lack of moves and lousy controls, each bout degenerates into a button mash-a-thon. The special moves seem very similar to Street Fighter 2 (*cough*rip-off*cough*), and the bouts tend to run for far too long. Besides challenging a friend, you can also indulge in a story mode which is basically a string of CPU battles intertwined with some laughable cut scenes. I tend to enjoy fighting games, but Shaq Fu clanks off the rim like one of Shaq's foul shots. © Copyright 1999 The Video Game Critic.
Find Shaq Fu on eBay, Amazon, YouTube
1 or 2 players
If you like this game, try: Street Fighter Anniversary Collection (Playstation 2),
Kung Fu Master (Atari 7800), Street Fighter Collection 2 (Playstation),
Super Puzzle Fighter II (Game Boy Advance), Supreme Warrior (Sega CD)
Skuljagger
Grade: B+
Publisher: ASC (1992)
Reviewed: 2010/7/17

As a simple-yet-fun swashbuckling adventure, Skuljagger equates to pure summer joy. This exotic platformer puts you in the role of a clean-cut pirate out to destroy an ugly bastard named Skuljagger. The gameplay is pretty standard as you leap between ledges, collect floating gems, and slay guards with your sword (after ducking under their bullets, of course). There are only two or three types of enemies per stage, but I like how they don't regenerate, making it easier to explore. Your sword has good reach, but flying enemies like giant wasps swoop in from odd angles, making the jump-slash attack your best friend. Whimsical fruit power-ups include cherry balloons, orange grenades, and grapes that turn you into a big purple bouncy ball. I love the tropical scenery featuring lush islands, quaint villages, and crumbling ruins. The first stage offers a nice view of distant green islands in a shimmering blue sea. Even the warehouse stage is inviting thanks to the vine-covered ruins seen through the windows. There are alternate paths and hidden areas to discover, but I hate how you're sometimes expected to make "leaps of faith" onto platforms out of view. Spicing things up are the occasional opportunities to man cannons to sink ships in the distance. The soundtrack is better than average, and the difficulty is reasonable. 75 pages of the 80-page manual are dedicated to a colorful illustrated comic which explains the background story. Skuljagger may be a conventional platformer at heart, but I never seem to get tired of playing it. © Copyright 2010 The Video Game Critic.
Find Skuljagger on eBay, Amazon, YouTube
Our high score: 48635
Save mechanism: Password
1 player
If you like this game, try: Lester the Unlikely (Super Nintendo),
Pirates: The Legend of Black Kat (Xbox), Saint Sword (Genesis),
Lego Pirates of the Caribbean (Xbox 360), Shipwreckers (Playstation)