U.N. Squadron is a terrific, old-fashioned, side-scrolling shooter that also taps into the system's slick graphic capabilities. You are the pilot of a jet fighter blasting waves of helicopters, tanks, planes, and ships. The objects on the screen are sizeable, and I love how enemy planes rotate into formation. You're equipped with rapid-fire cannons and a limited supply of devastating bombs.

The first stage features a desert base with scenery that looks practically photo-realistic. U.N. Squadron's exciting brand of non-stop shooting and bombing brought back fond memories of Scramble, an arcade favorite of mine from the early 80's. Naturally, each stage ends with an obligatory "boss", but these are not terribly hard to defeat. Upon completing the first stage, you can select from a number of subsequent missions.

The wide range of scenic backdrops include open seas, jungle forests, rocky gorges, and in the clouds of an intense thunderstorm. Granted, the water stages look somewhat cheesy. Certain stages require you to make several "passes" at a strategic target (like a massive battleship), which I found to be a very cool concept.

Your firepower and weapon options increase with each new life, as well as each "continue". With its awesome firepower and frantic gameplay, I could play U.N. Squadron all day. Only a few notable flaws knock it down a notch. Much of the music has an inappropriate "happy go lucky" quality more suitable for a cute platform game. Also, the game suffers from terrible slowdown when things get hectic. Nonetheless, I still found U.N. Squadron to be instantly fun and satisfying. © Copyright 2005 The Video Game Critic. 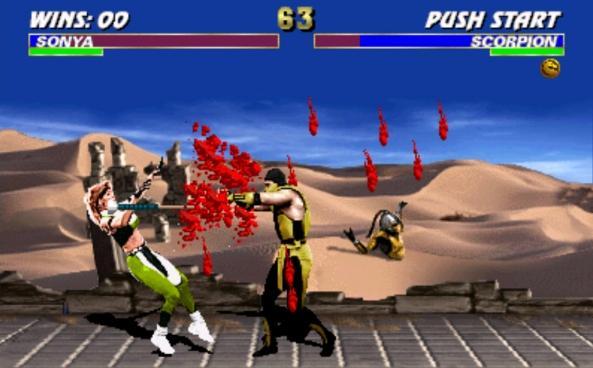 This Ultimate edition restored Scorpion to the cast of fighters and addressed several subtle gameplay issues with Mortal Kombat 3. Otherwise the changes seem superficial at best. There are 23 playable characters, but the roster is heavily watered down with color-palette swaps. There are no less than six Scorpion clones: Scorpion, Sub-Zero, Reptile, Rain, Ermac, and Noob Saibot. Few gamers will cry over Sheeva's absence, but where the hell is Rayden?? The graphics are exactly like MK3, and except for a few new backgrounds, most gamers would be hard-pressed to tell the difference. As the final Mortal Kombat released for the 16-bit systems, Ultimate MK3 plays well enough, but feels less like a legitimate sequel and more like an apology for the previous game. © Copyright 2009 The Video Game Critic.
Find Ultimate Mortal Kombat 3 on eBay, Amazon, YouTube, Forums
Copy link to this review
1 or 2 players
If you like this game, try: Ultimate Mortal Kombat 3 (Genesis),
Mortal Kombat 3 (Genesis), Mortal Kombat 3 (Super Nintendo),
Mortal Kombat Trilogy (Tiger Game.com), Mortal Kombat II (Sega 32X)
Ultraman
Grade: F
Publisher: Bandai (1991)
Reviewed: 2007/3/16

I happen to be a long-time fan of Ultraman, but this is a bad game of colossal proportions. As a child, I was fascinated by the poor-dubbed Japanese television show featuring men in rubber monster outfits (who knew?) wrestling around miniature cities. This video game adaptation not only fails to capture the grand scale of those battles, but it makes them seem incredibly boring.

Ultraman is barely playable, and its only entertainment value comes from mocking its deficiencies. Now I admit that some of the monsters in the old show looked pretty silly, but a few in this game look as if they were borrowed from Sesame Street. I'm pretty sure I defeated a Snuffleupagus in one stage! The slow, one-on-one battles lack strategy as the stiff combatants struggle to execute basic kicks and punches. You have a "special move" (usually a projectile attack) powered by a special meter that charges over time.

Once you deplete your opponent's energy, the word "FINISH" appears on the screen, providing false hope that the end of the match is at hand. But your foe can only be defeated by performing a special attack at full power. This usually means backing off while waiting for your meter to charge, and in the meantime, your opponent can still execute attacks and even regain his health! Take it from me - there's nothing more humiliating than being defeated by a monster with no life.

This idiotic design ruins what could have been a perfectly... um... aw hell - it would have been awful anyway! There's no two-player mode (!), and the elusive option screen is accessed by holding down select while pressing start (real intuitive huh?). You have to wonder about the state of mind of the guy who authorized this game to be shipped. At the very least, Bandai could have incorporated the kick-ass theme song from the television show, but just like the fun, it's nowhere to be found. © Copyright 2007 The Video Game Critic. 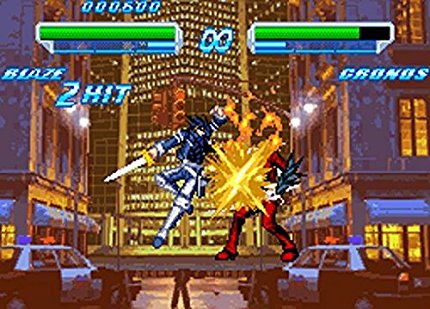 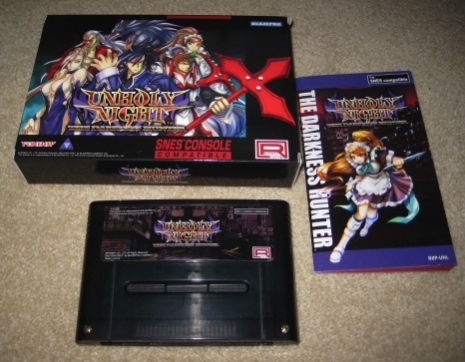 When I spotted a brand new SNES fighter on Amazon I was powerless to resist. Billed as "an original 1-on-1 fighting game from the creators of past masterpieces", Unholy Night has a light-versus-dark theme in the tradition of Darkstalkers (PS1, 1996). There are three "hunter" characters and three "darkness" fighters.

I'm sorry to report the graphics are suspect. The fighters are small, the action slow, and the animation choppy at times. For a 2017 title I was expecting more. I do like the semi-digitized look of the stages, even if they do look a bit washed out and lacking in detail. The opening stage features a rooftop with gargoyles overlooking an amazing city skyline.

The fighting action won't blow you away but it's not terrible. The controls are easy enough to grasp for Street Fighter fans, and the "synchro gauge" adds some depth. The story mode spits out rapid-fire dialog that's not even displayed long enough to read. What I did manage to catch didn't make much sense. "I have fooled you? Your power is shortage" I can't tell if this was the worst translation job ever or the developers were just goofing around.

The fighting system isn't particularly sophisticated but I noticed certain characters have weaknesses. For example, I was able to defeat the werewolf with a series of projectile attacks. The music is simple but has a nice early-90's vibe to it. Still, for a game 25 years in the making Unholy Night has a lot of rough edges.

There are no options, no victory animations, and survival mode is far too easy. The game does get extra points however for its glossy packaging, colorful instruction manual, and distinctive black cartridge. Failing to deliver as a cutting-edge fighter, I suspect Unholy Night will appeal more to collectors than critics. © Copyright 2017 The Video Game Critic.

Based on a film
Based on the 1987 film, The Untouchables features all kinds of 1930's-era gangster mayhem. There are three completely different styles of games and you even get a stage select. Much of the game is shootouts where you view the action from behind your detective. Moving a crosshair around a back alley, you'll take aim at gangsters hanging out of windows and being dropped off in cars. Since your shotgun only holds two shots, you're reloading constantly.

You can move behind crates and barrels to take cover, but once somebody clears them out with a stick of dynamite you're a sitting duck. These stages are way too hard, larging due to their unnecessary time limits. Even when I made it there was never more than a second or two to spare. What's your reward? You get to do the same thing all over again in another alley! And then another. Believe it or not I suffered through seven rounds of this torture, with more to come no doubt. Any semblance of fun I felt during that initial shootout had long since dissipated by the third.

The side-scrolling stages almost come as a relief, and they aren't half bad. You can fire rapidly and in all directions as you jump around a warehouse taking out goons. The bad guys look cartoonish and their digitized groans remind me of Barney from The Simpsons. Near the end of the game is an overhead shooting stage that takes place at a large bank. You can freely explore the building but the fact that you move so slowly sucks all the fun out of it. Untouchables is three games in one, most of which you'll have no desire to play twice. © Copyright 2021 The Video Game Critic. 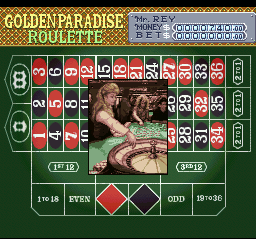 This is an attractive but average-playing casino game with two modes: adventure and multi-player. The adventure mode takes you and four fictional friends (who all look as if they've had extensive plastic surgery) on a trip to Las Vegas. Vegas Stakes tries to be realistic, but It feels pretty silly to sit through the "car trip" and then check into the hotel. From your hotel room, you have to call one of your friends to have them meet you at the casino!

The casino itself offers slots, craps, poker, blackjack, and roulette. The graphics are crisp and clean, and the games are easy to play. Unfortunately, you are constantly being interrupted by annoying people trying to sell you stuff, pick your pocket, beg for money. One guy even asks you to take him to the emergency room! Sometimes you can make money from these people, but it's still annoying. The games themselves play well, but there are annoying pauses, and you can't quit a game in progress (even after you folded in a game of poker).

The only games I really enjoyed were the card games. Chance games like roulette and slots are really boring with no real money on the line. The multiplayer mode only lets you select from four games: slots, blackjack, roulette, and craps. The game also lets you move to different casinos, altering the background graphics and music. A battery backup saves your place. Vegas Stakes tries to take gambling to the next level, with mixed results. . © Copyright 2000 The Video Game Critic. 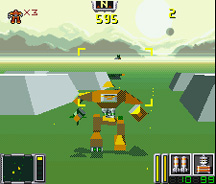 For those of you who slept through Astronomy class, a "vortex" is a celestial body of such high mass and density that its gravitational pull will literally suck the fun out of any game named after it. This cartridge has all the ingredients of a decent game, but they never come together quite right. Vortex's 3D graphics and explosions are comparable to Star Fox (they employ the same graphics chip), and the techno soundtrack is pretty bumpin' as well.

While a basic 3D shooter at heart, your ship has the ability to "morph" between a jet, tank, walker, and protective shell. This provides a lot of potential strategy as you size up each stage and boss. Too bad this promising concept is wasted due to poor design. A good video game should "hook" the player from the start, and gradually draw him in with a reasonably ramping difficulty. The Star Fox developers knew this, but the Vortex developers apparently did not. The controls are daunting, with over 20 button combinations that will flummox casual gamers right off the bat. Then you have a bunch of time-consuming "training stages", which I found to be a serious turn-off.

The first "real" stage is awfully boring, set in deep space with nothing but a fence (huh?). Worst yet, the first boss is nearly insurmountable, bringing any novice player to his knees. With shoddy design like this, Vortex never really had a chance. I'm sure there are a few dedicated players who will stick with Vortex long enough to see what it has to offer, but most will find themselves shouting "next!" after just a few minutes. © Copyright 2006 The Video Game Critic.