Dark Tower is one of the few adventure games for the Vectrex. You view the action from just behind your warrior, who happens to bear a striking resemblance to Marvin the Martian. As you walk through the forest, different types of trees scale smoothly as you approach. Hidden in the woods are chests, keys, and bags of gold. The goal is to collect all four keys and ultimately attempt to solve the puzzle of the Dark Tower.

Initially I was captivated by the smooth scaling scenery, excellent sound effects, and the whole treasure-hunting aspect. There's nothing else like this on the Vectrex. The weakest part of the game is the action - or lack of it. There's really only one action sequence, which repeats ad nauseam. In this repetitive sequence, your warrior is looking down a corridor, with Minotaur warriors peeking around corners and hurling fireballs your way. You need to shoot a certain number of Minotaurs to escape.

It's kind of fun the first few times you play it, but you'll be thrown into this stage literally dozens of times. The rest of the game involves a lot of aimless wandering unless you take the time to map things out on paper. Then there's the matter of the "plague" business, which randomly kills you dead in your tracks. I've yet to arrive at the Dark Tower, and I'm not convinced it's worth the effort. © Copyright 2002 The Video Game Critic.

Immensely fun and relentlessly challenging, Fortress of Narzod is one of those "must have" games for the Vectrex. It's rare to find a shooter that's entirely original, but Fortress of Narzod is just that. Better yet, it leverages the unique strengths of the Vectrex system to create an arcade experience that couldn't be duplicated on any other classic console.

You're in control of a hovercraft at the mouth of a 3D gorge with steep walls and cliffs, and a fortress can be seen on the far end. Your goal is to reach it, but first you'll need to blast spiders, ghouls, and "grabbers" that zigzag their way towards you. What's cool about Narzod is that you can fire rapidly and use the walls to ricochet your shots, creating a myriad of crossfire possibilities.

Some of your missiles eventually bounce back towards the bottom of the screen, so stay alert. Even enemy fire bounces off of the walls, and the action becomes absolutely furious in the later stages. You have the ability to move up and down as well as side-to-side (a la Centipede), which comes in very handy.

The 3D graphics are used to good effect, as enemies scale smoothly and occasionally move out of sight behind protruding cliff walls. Only some fishy collision detection prevents the game from earning a solid A. If you manage to clear the first three levels (a tall order), you'll face the boss - Narzod himself. This is one shooter that I can play over and over again. © Copyright 2003 The Video Game Critic. 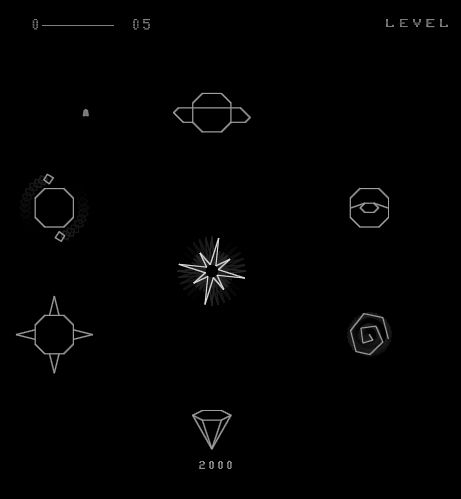 Billed as the "biggest Vectrex adventure ever", this awesome new cart is loaded with features. Gravitrex is a superb remake of Atari's Gravitar, where you blow up ground installations and rescue humans from various planets. Along the way you'll need to fight UFOs, maintain your fuel supply, and resist various types of gravitational fields. The game is difficult but ultimately satisfying.

There are three levels containing six worlds each, and most of these worlds span multiple screens! The controls are Asteroids-like but also incorporate a shield button. I only wish my ship's missiles had better range. Your well-designed ship with twin firing boosters looks great, and I love how the planets explode after being conquered. In addition, it's a nice touch how the people squeak when accidentally incinerated.

Gravitrex features two skill levels, a customizable control scheme, a level select password, and a digitized speech intro! And if that weren't enough, there's another complete game called Patriots III also included! To be honest, I'm not a big fan of this Missile Command clone. While it's probably the best in the Patriots series, your missiles move too slowly and the satellites are a real pain in the ass. But since it's a bonus I can't complain too much. Overall Vectrex fans should be thanking John Dondzilla for this first-class package. © Copyright 2003 The Video Game Critic.

Heads Up is a thoroughly dull soccer game with snail-like gameplay and confusing controls. When I first showed this to my friend Scott, he exclaimed, "Wow! A Vectrex basketball game!" That was hardly a good sign, and matters would become far worse once we started playing. In short, this game is an excruciating ordeal which can't come to an end fast enough.

The side-scrolling field has stick-figure players which scale in as they approach the bottom of the screen. But Heads Up needs a speed burst button in the worst way. It takes forever to walk the ball down the field, which is often necessary because the passing is so poor. The players on one team are slightly brighter, but in general it's hard to tell them apart.

Changing the player you control is a real headache. You can move your goalie up and down, but the dummy always kicks the ball right back out in front of the goal. Even the name of this game is a misnomer - it's impossible to head the ball at all. The Vectrex doesn't support sports games very well, and Heads Up is a perfect example. © Copyright 2003 The Video Game Critic. 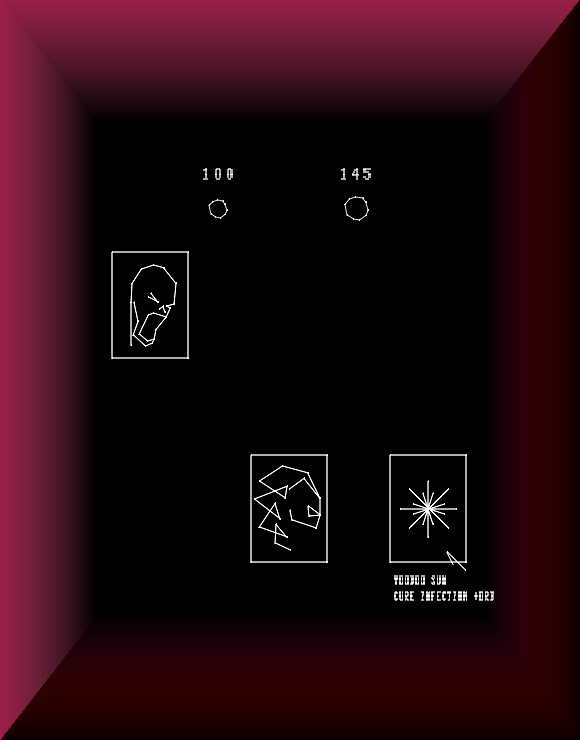 This is hardly the kind of game you'd expect to find on the Vectrex. Hexed is a Voodoo-themed card game. I'm no expert, but I happen to be of the opinion that Voodoo is awesome. The mesmerizing music and wavy letters of the title screen effectively set the tone. Hexed is a turned-based contest between you and the CPU. The top of the screen displays two "orbs" indicating the life force of both players. You win by shrinking your opponent's orb to a dot.

You activate a card by simply dragging it to the middle of the screen. Infection shrinks your orb in real-time, so don't dawdle! The miniature instruction book is hard to read (if you don't have a microscope lying around) but it's critical to know that for each 100 points you score your orb is refreshed.

The idea of combining cards is cool but underdeveloped. The only cards I could apply this to were the pins and voodoo doll, and frankly there was no advantage to doing so. In addition, the orbs don't vary in size much, making it hard to tell who's winning. When an orb gets small enough, it suddenly becomes a dot - signaling defeat. Despite its flaws, I find myself playing Hexed over and over and over again. I don't know much [about Voodoo], but I know I love [Voodoo], and that may be... all I need... to know. © Copyright 2013 The Video Game Critic.

I don't know why this game is called "Hyperchase" since there's really no chasing involved. Colecovision fans will recognize this game's likeness to Turbo, while Atari 2600 players will probably see a bit of Enduro. It's a point-of-view racing game where you see the action from above and just behind your car. This gives you a good vantage point of the road ahead and oncoming cars. Two play modes allow you to race for either points or best time.

I was surprised how well this game conveys the sensation of speed. Trees, telephone poles, and street lights whiz by smoothly, and you even drive through a tunnel at one point. The road never actually bends, but by altering your perspective of the action, the game actually gives the illusion of curves. Although the road and scenery is smoothly animated, the other cars are not. They move in a jumpy manner, especially when several are on the screen at once.

Tragically, this leads to poor collision detection. Other cars tend to pass right through yours; or worse, hit you from out of nowhere. The controls are a bit sensitive, and it's very easy to slam into the side of the road. In addition, it's difficult to shift (using the 1 and 2 buttons) while steering. In terms of sound, the hum of your motor is realistic, especially when switching gears. Hyperchase is an impressive-looking game, but the sloppy animation really holds it back. © Copyright 2002 The Video Game Critic.

Homebrew
This sci-fi title looks pretty sweet on the surface, but it's a tough nut to crack. The opening sequence shows the "I, Cyborg" title zooming in over some freaky, Twilight Zone music. The sound has a reverberating quality that's pretty amazing. Start the game and you view your cyborg from behind as he slowly walks down an endless corridor. He's an imposing figure, and my friends would usually say "whoa!" at the very sight of him. He fires some kind of "spray" weapon straight ahead, and while it's possible to angle it, I don't know why you would.

As you silently walk up the hallway you'll notice devices on the ceiling that fire electric bolts when you walk below them. You can't shoot these traps, but it's possible to position yourself to avoid their bolts if you can figure out a pattern. Eventually you're approached by a series of swirls that cannot be destroyed - only dodged. At this point my friend Scott was like, "Okay, what can I shoot?!"

That's where the saw blades come in. These things require about six hits to destroy, and there's little room for error. Your cyborg can absorb 10 hits from the bolts and swirls, but that saw blade will take his head clean off (as in "game over"). I, Cyborg requires a careful, deliberate approach, and describing its pace as glacial is probably fair.

The instructions hint that there are special weapons, bosses, and exotic scenery to be found. Maybe so, but I couldn't get past the first four stages, and they were all pretty much the same! You can come up with subtle strategies to progress a little bit further each time, but each game is so time-consuming that you wonder if it's worth it.

There's no score and only one skill level. A code input screen is available, but even with the codes, I couldn't figure out how to enter them properly. I, Cyborg has the building blocks of a great game, but it lacks fine tuning. Perhaps that's why a sequel is planned for the near future. Note: This game is available from Fury Unlimited. © Copyright 2012 The Video Game Critic.

[Vectrex index]  [Back to Top]