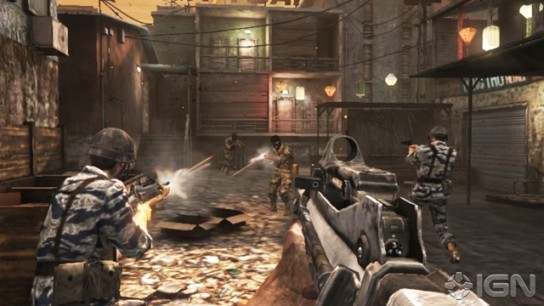 Why do gamers like first-person military shooters so much? Maybe because they're awesome? Declassified is pretty much what I want in a portable version of Black Ops. The missions are short and to-the-point, with fewer cut-scenes and less computer-controlled bull-[expletive]. Declassified puts you in precarious situations in locations that span the globe. You'll infiltrate facilities, rescue hostages, and halt missile launches.

You'll travel to Vietnam, Afghanistan, Germany, and Russia. There are plenty of snow scenes, which is always a plus. It's fun to weed out enemies one by one, and the auto-targeting system lets you pick off several in rapid succession. The graphics are comparable to the console version, and I don't mind using the edge of the touch screen to access grenades and other special weapons (less buttons to remember).

The commercial for this game highlights its on-line multiplayer mode, but Declassified packs enough single-player challenges to keep you busy. The campaign only has about 15 missions, but you also get time trials and a "hostiles" mode. Hostiles is like playing on-line, except you fight against wave after wave of CPU-controlled players. High scores and best times are recorded for all modes.

If there's one thing I dislike about Declassified, it's the uneven mission difficulty. That second mission is absolute murder! You need to save groups of analysts being held hostage, and it's really tough to prevent them from getting shot. It must have taken me 100 tries to get past that one. The key is to use a flash-bang to buy yourself extra time. In the end, Black Ops: Declassified is not the epic experience of the console game, but it doesn't try to be. It's simple yet satisfying shooting action on-the-go. © Copyright 2013 The Video Game Critic. 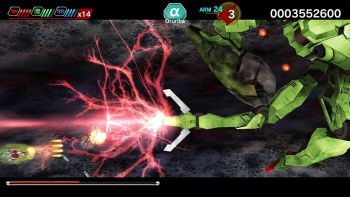 The first time I tried this side-scrolling import I hated it. Arcade is the default mode, which seems reasonable enough. Unfortunately the set-up screens are painfully Japanese and the game seems to have a real attitude about my Vita being offline. Once the shooting action began I couldn't tell what the [expletive] was going on. The Vita screen is wide enough as it is, but Dariusburst adds black space to the top and bottom, limiting the playfield to a narrow strip running across the center! Everything is so tiny! Your ship is the size of a flea and it's impossible to read your score.

I nearly wrote off Dariusburst right there, but then I tried the CS mode, which is apparently one of those "score attack" modes. You select between several stage "routes" and high scores are saved (provided you complete the mission). Unlike the arcade mode, this one is actually playable. The objects look sharp, your score is clearly visible, and the gameplay is not terrible. It feels rather dull at first as you unleash rapid-fire shots while scooping up red, green, or blue pods.

Then things get interesting as you find yourself swarmed by literally hundreds of small enemies moving in looping formations. It's not as overwhelming as it sounds, and it's fun to concentrate your firepower into the mass of swirling objects. You also have a high-powered special weapon and the ability to fire backwards.

The bosses are where the game falters. The fish-inspired behemoths aren't especially interesting and don't have a life bar. Instead of deteriorating they pretty much retain their shape until beams of light finally pour through their bodies, signalling their peaceful demise. Lame! An overwrought orchestrated musical score features female vocals that reach operatic levels, but it doesn't match the pedestrian gameplay. Dariusburst lacks punch, but if you're looking for a side-scrolling shooter for your Vita, this will qualify. © Copyright 2017 The Video Game Critic. 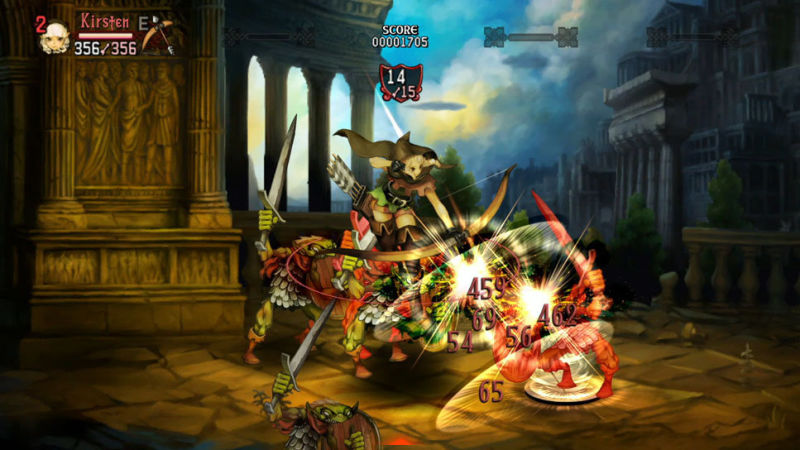 When I realized I was overdue for a Vita review I was glad to see Dragon's Crown waiting in the queue. I had been pretty harsh on Dragon's Crown (Playstation 3, 2013) but I still have a thing for side-scrolling brawlers (which tend to me in short supply nowadays). Upon firing this up I was reminded just how brilliantly sharp and vibrant the Vita's graphics look. This game looks better on the small screen!

Its captivating intro culminates with a scene of a distant castle, giving me warm, tingly memories of Dragon's Lair (Philips CD-i, 1994). The medieval scenery looks spectacular but the exaggerated character design is something else. My female "Amazon warrior" has so much junk in her trunk you could set a round of beers on that thing. And the witch's cleavage is just all over the place; it cannot be contained.

The tutorial introduces dozens of moves available via combinations of buttons and analog sticks. The digital pad is dedicated to inventory, and that's too bad because double-tapping with an analog stick (to dash) is awkward. Touch screen controls have also been incorporated because they could. I guess it's convenient enough to tap on a treasure chest to have your thief open it, but I wish my character could open a damn door on her own.

The hack-and-slash combat is not as satisfying as it should be. When you hit enemies they just sort of blink red, and they can absorb dozens upon dozens of hits. When your four-character party is fighting a horde of goblins, the screen is so awash with bodies, spells, damage indicators you can't really tell what's happening. I'm not sure how the continue system works but I use them a lot.

The boss battles are so long and exhausting I just want to save and quit whenever I get done. I like how you're instantly transported back to the tavern after a quest, but sorting out the spoils is confusing. In general the menu interface is awfully complicated. I love the Dungeons & Dragons vibe of Dragon's Crown, but I feel like they went way overboard in just about every conceivable way. © Copyright 2019 The Video Game Critic. 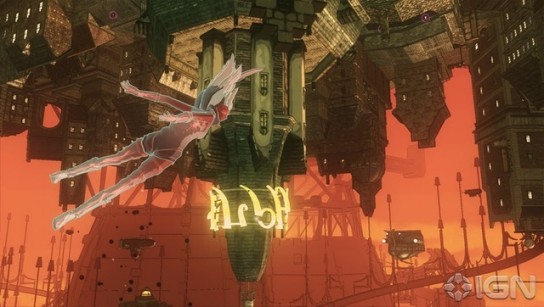 It's hardly what I was expecting, but I'm pleased with Gravity Rush. This futuristic adventure stars a magical babe in a floating world that's coming apart at the seams. With a black cat as your sidekick, you can manipulate gravity (as it pertains to you) in order to navigate your surroundings. You can temporarily walk on walls and ceilings, or free-fall through the air sideways or upwards.

Once you grasp the concept, it's fun to "fall" across town and land on the side of a building, or vault between huge floating chunks of debris. Is it disorienting? Hell yes, but it's also exhilarating to alter your center of gravity at the press of a button. The fact that you don't sustain damage from falling any distance is part of what makes the game fun. You might fall to the ground in a heap but you'll be no worse for wear.

As you try to uncover your identity you'll talk to characters around town, battle monsters, and become embroiled in a storyline involving a shape-changing villain. The stylish graphics are anime-style, but there's really not much to see. The controls are a bit touchy (especially when aiming with the right thumbstick) but forgiving - especially during combat. Most of your enemies are black blobs with big red eyes. Guess where their weak spot is!

The game moves at a brisk pace and there are frequent auto-saves. A few of the fetch and stealth missions tested my patience, but since they were short, I wasn't deterred. The cut-scenes are presented in comic-book style cels you page through by swiping the touch screen. It's fun to watch the story unfold in these colorful, semi-animated scenes. The makers of Gravity Rush clearly knew what they were doing. This is a very thoughtful and original title that really works. I don't think I've even played anything like this before and that's saying something. © Copyright 2013 The Video Game Critic. 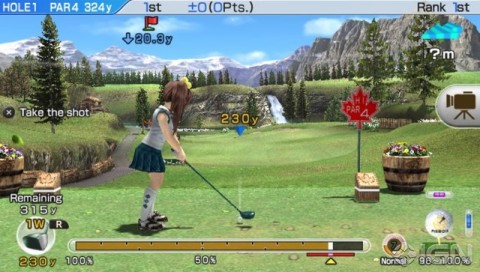 The Tiger Woods golf games have their ups and downs (mainly down), but Hot Shots is always a good time. And this Vita edition might just be the best single-player version of the game. The Hot Shots franchise has always employed a three-press swing mechanism that relies on precision timing. High definition televisions can introduce a slight control lag, but on the Vita the controls are as tight as they can possibly be.

The courses look gorgeous (as usual) with their rolling green hills, tranquil lakes, and quaint farms. You'll spot occasional wildlife including rabbits, cows, chickens, and bears (what?!). The golfers are likeable anime characters that react to shots with unbridled enthusiasm. World Invitation offers some alternate variations of the three-press swing - like a circle that shrinks to the point of impact - but it's always the same idea. Aiming and gauging the power of your shot is important, but that's just the tip of the iceberg. You need to take into account the wind, the ball lie, the pin placement, and what kind of spin you should apply.

Weather is also a factor, and it tends to change abruptly. One hole will be played during a downpour, while the next is played under a clear sky. I personally would have preferred more gradual changes in conditions. Still, I like how the courses represent the various seasons. In the Strokes mode you not only earn a score but also rack up points for special shots. I like how during approach shots concentric circles appear around the hole to indicate bonus values.

The enjoyable Challenge mode is a series of short contests (typically nine holes) of increasing difficulty. Points are used to unlock new characters, courses, and miscellaneous items like outfits. The action moves at a brisk pace and your progress is auto-saved. You can play 18 holes in just a few minutes! Frankly, I could play this game all day. Quick, fun, and addictive, Hot Shots World Invitational is everything a portable game should be. © Copyright 2013 The Video Game Critic.