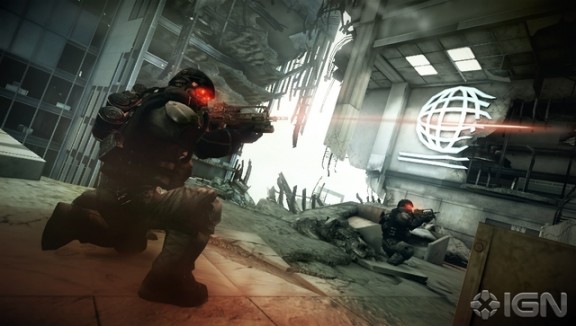 If you're looking for a full-blown FPS (first-person shooter) for your Vita, look no further than Killzone Mercenary. It has the look and feel of a big budget title that doesn't cut corners. Your adrenaline will kick in during the opening mission where you infiltrate a skyscraper in a flying squirrel suit. The degree of graphic detail in Mercenary is pretty remarkable.

The sprawling citiscapes make you feel part of a larger conflict, and the mission briefings are pure sensory overload. The stages themselves are a lot less interesting as you trudge through crumbling buildings and industrial facilities with a lot of elevators. The character models look terrific and professional voice acting reinforces the notion of a no-nonsense military operation.

The controls are well designed, and I like how you actually need to aim to kill targets (unlike most modern shooters which rely heavily on auto-aim). It is annoying however that you have to reload on a constant basis. I wish the thumbsticks on the system were a little higher, as their low positioning can cramp large hands. The touch controls are basically limited to melee, and they provide an efficient way to administer a dagger to the throat.

The missions usually have multiple objectives such as rescuing people or blowing up some ship. Some stages are coop, which is nice because you can count on somebody to bail you out of tight spots. The ability to acquire new arms from a dealer adds depth, and it's fun to use the remote stealth robot to "thin out" enemies ahead.

The missions are easy to follow with frequent checkpoints, but they can take up to an hour to complete. That's a serious problem for a portable title, especially when there's no ability to save during a mission! I felt a definite sense of relief when my mission was complete and I saw that saving icon. Killzone Mercenary is yet another example of Sony not "getting" the portable market. It's a quality shooter but its time demands are hardly ideal for on-the-go gaming. © Copyright 2014 The Video Game Critic. 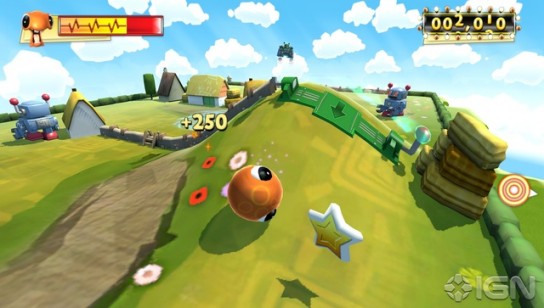 Oh, how I despise this game! Little Deviants is a tech demo masquerading as a legitimate title. It features a wacky assortment of cartoon characters who assume roles in mini-games meant to be played for high score. These games really bend over backwards to leverage the touch screens (front and back), camera, and oscilloscope of the Vita system.

In the first game you guide a rolly-polly character around a meadow by using the rear touch pad to create bumps and ridges in the landscape. It sounds like a lot of fun, but it's remarkably non-intuitive and aggravating. Other games challenge you to knock down robots that appear in doorways (by tapping the screen) or skydive through rings (by tilting the system).

"Bots Invasion" is a first-person shooter that uses the camera to make it look like your targets are flying around the room you are in. On the surface, these concepts sound promising. In reality, they feel like repetitive chores. And the situation is even worse than that.

The games are downright annoying, so you'll want them to end as soon as possible. No chance of that, as each requires you to persevere through ten grueling, time-consuming waves. You really can't put a price tag on this kind of misery. I would say Little Deviants should have been shipped with the system, but that may have triggered a deluge of returns. I guess it's best that this ill-conceived title remains as obscure as possible. © Copyright 2014 The Video Game Critic. 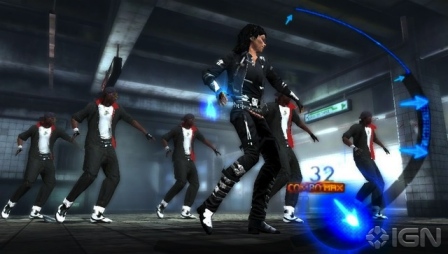 Any game starring Michael Jackson automatically qualifies as a curiosity piece. You expect a certain amount of weirdness, and thankfully The Experience delivers! Upon starting it up, the game informs you it's disabling the network connection "for optimal system performance." Really? Who would have guessed a glorified cell phone game would require so much processing power? The Experience opens with a tutorial stage featuring Michael dancing to the song Billie Jean as graphical cues appear around him.

Michael looks like an animated manikin, which incidentally is exactly how he looked in real life! The idea is to mimic his dance moves using your fingers on the touch screen to the rhythm of the song. You might need to swipe a certain direction, tap with two fingers, or draw a little curlicue. The more elaborate the moves are, the harder - and less fun - the gameplay is. At first I was under the impression you needed to touch Michael to control him, but it's best to keep your fingers near the edge of the screen so they don't obstruct the prompts. In fairness, the gestures are well thought out and match the beats.

The highlight of the game is the music, which offers classic tunes like "Beat It", "Smooth Criminal", and "Black or White". More obscure cuts include "Ghosts", "Speed Demon", and "Blood on the Dancefloor". The background graphics are computer-generated versions of the videos, but why didn't they just use the original videos?! That would have been far more appealing than fake-looking scenery and a virtual Macaulay Culkin who raps without moving his lips.

I didn't find the Experience particularly fun, and after a while I really started to despise the touch screen controls. Upon completing each song and earning the obligatory B grade I had no desire to replay that song. The so-called "challenges" are more like chores. Draw 45 perfect shapes in a row? Complete the song 7 times? No thanks! This game makes me want to pick up a more interactive version of the Michael Jackson: The Experience. On second thought, I think I've had enough. © Copyright 2015 The Video Game Critic. 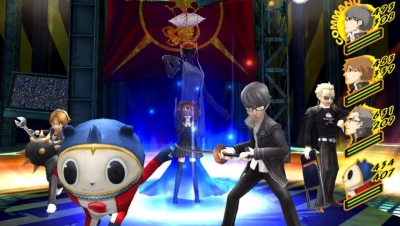 Contributed by ptdebate of the RPG Crew.
If you associate high school with fighting demons, exploring parallel worlds, and solving murder mysteries, then you've probably been playing Persona 4 Golden. The game is actually a remastered and expanded port of Shin Megami Tensei: Persona 4 (PS2, 2008). It puts you in the shoes of a Japanese teen staying with relatives in a new town.

Persona 4's 100-hour experience recalls both the anxiety and elation of being a high schooler. Couple that with the fantasy of befriending colorful characters including a teen idol, a kung fu-obsessed tomboy, a beautiful heiress, a cross-dressing detective, and a giant teddy bear. Unlike most Japanese role-playing games, combat is just one area of character development. Others include making friends, studying, fishing, skiing, camping, and going on dates.

Developing social skills helps with forming relationships that strengthen your "personas". Personas can be collected, fused (like an occult spin on Pokemon), and summoned in battle. You encounter supernatural foes as you explore numerous dungeons from a third-person perspective. Making contact initiates a battle, and strategic options include preemptive strikes and evasive maneuvers.

Exploiting your opponent's "elemental weakness" is key; attacking an enemy vulnerable to fire with the appropriate spell will knock it down and grant you a bonus turn. Should you knock all enemies down, you can perform an "all out attack" that inflicts widespread damage.

The battles are fast and fun despite occasional spikes in difficulty. Any frustration is mitigated by the ability to restart on the same floor of the dungeon. Persona 4 features a murder mystery plot that keeps you guessing, a catchy soundtrack, and an exhilarating combat system. Add in the irresistible charm of an 80's teen movie and you have a journey that stays with you long after the credits roll. © Copyright 2015 The Video Game Critic. 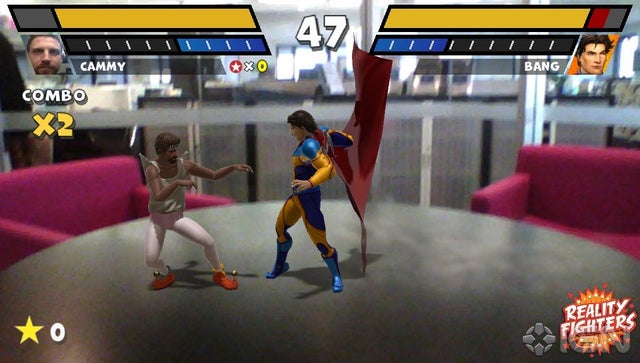 As cheesy as this fighter is, it's probably the most memorable title in my Vita library. If nothing else Reality Fighters a remarkably effective demonstration of augmented reality. You start by creating yourself as a fighter using a poorly-designed user interface. It's easy to position your face in a frame using the system's camera, but the lighting conditions need to be damn near perfect. And even then the screen sporadically prompts you to "push the button" without specifying which one! Apparently you're supposed to squeeze both shoulder buttons at the same time?

Anyway the resulting image is superimposed over a character model. Mine had a maniacal look with a big brown smudge on my cheek. Pretty funny actually. You can dress your fighter how you please but with options like "disco jacket" and "clown pants" it's hard not to look like an idiot. The story mode takes you through a series of opponents in digitized locations like a forest, countryside, or Central Park.

Once you see the fighters in these surroundings the appeal of the game becomes clear. The manner in which they meld with the photorealistic scenery is amazing! Even the shadows look convincing. If you don't want to use their scenic locations you can use the Vita's camera view to do battle right in the room where you're sitting! Watching a little version of myself duking it out with a breakdancer in the middle of my game room was surreal to say the least.

I had my friends give Reality Fighters a try and they loved it! The fighting is simplistic but fun thanks to some flashy visual effects. Anybody familiar with Street Fighter-style moves will be able to dish out flaming punches with no problem. You control the camera by angling the system so the view can be a little jumpy in the heat of battle. Your opponents vary from karate masters to zombies to ballerinas. You unlock silly items as you progress. Reality Fighters may be a novelty item but it's an entertaining one. And the fact that it will make you smile - and maybe even laugh - says a lot. © Copyright 2020 The Video Game Critic.