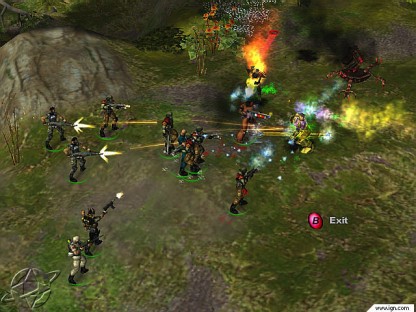 Now this is a real-time strategy game even I can get excited about. Aliens Vs. Predator actually lets you play three parallel campaigns as the marines, Aliens, or Predators. I began with the marines and immediately struggled with the non-intuitive control scheme. The manual wasn't much help but I figured it out.

During each mission you'll lead a party composed of infantry, comm techs, synthetics, and medics. Medics automatically heal humans, but since they can only tend to one at a time, it's good to have two or three of these guys on hand. Your mission objectives typically involve transporting items, repairing installations, or destroying alien nests.

The overhead view strikes a nice balance, providing a wide-angle view without limiting the graphic detail. When a clash occurs, the battles are thrilling to watch. There's so much chaos you don't know where to look! Aliens splatter acid when shot and I like how their bodies twitch when they're dead. You can call on supply ships for additional personnel, and holding off waves of attackers long enough for reinforcements to arrive is suspenseful as hell.

Extinction becomes more interesting once you start experimenting with personnel combinations and weapon upgrades. One advanced weapon even lets you initiate a computer-guided missile strike from orbit. Replenishing your party after a costly battle is a drawn-out process, and between battles there are plenty of lulls in the action. Unexplored areas are dark on your map, forcing you to "feel your way around" in a slow, time-consuming manner. Certain mission objectives like "collect 20 alien skulls" feel more like errands ("17 more to go!").

The orchestrated musical score lends weight to the story, and distinctive sound effects (like the scanner) are practically lifted from the films. You have the option to save your progress at any time via the pause menu (sweet). I enjoyed the marine campaign, but couldn't really get into the Alien and Predator campaigns. I guess my interest was starting to wane. It takes a patient gamer to appreciate Aliens Versus Predator, but if you're willing to invest the time there's a heck of a lot of content here. © Copyright 2013 The Video Game Critic. 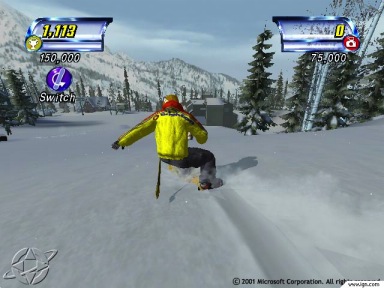 I've always been a sucker for snowboarding games, so it's odd that I missed this one the first time around. I suspect Amped got overshadowed by the critically-acclaimed SSX series on the PS2. Anyway, Amped delivers a fast-paced, trick-heavy downhill experience, and I actually prefer its wide-open, natural courses over those crazy "fantasy" courses of SSX.

Amped's graphics boast inviting mountain peaks, powdery snow, and the occasional cabin or lodge nestled in the snowdrifts. Strategically placed ramps and rails lets you perform spectacular stunts, and scattered photographers encourage you to show off your stuff. The controls have a definite learning curve, especially with regards to performing spins or flips. The landings are unforgiving, and you'll often find yourself in an awkward mid-air position. I recommend taking your hands off the controls for a second or two before landing to give your boarder a chance to right himself.

Amped's sense of speed is terrific, and there are really no lulls in the action. The game does have its share of glitches however, and it's not uncommon to become lodged in the scenery. Also, since the game scores grinds by how long you're on a rail, you can rack up some insanely high scores by sliding a very short distance (very slowly). An addictive career lets you gradually unlock new mountains, gear, and sponsors, but some of the challenges are poorly designed. How are you supposed to impress a sponsor with flips and spins when there are no ramps to jump off?!

The game manages to be fun despite its frequent frustrations. Its terrific guitar-driven soundtrack will get you totally stoked, and if you get annoyed with any tune, just hit the "white" button to skip it! I could do without the game's smart-assed commentary however ("Try landing that next time!"), and where are those goofy cartoon voices coming from? The multiplayer mode is turns-only (no split-screen), which is seriously lame. Amped has some rough edges, but there's still enough wintry goodness here to keep you busy over the cold months. © Copyright 2010 The Video Game Critic. 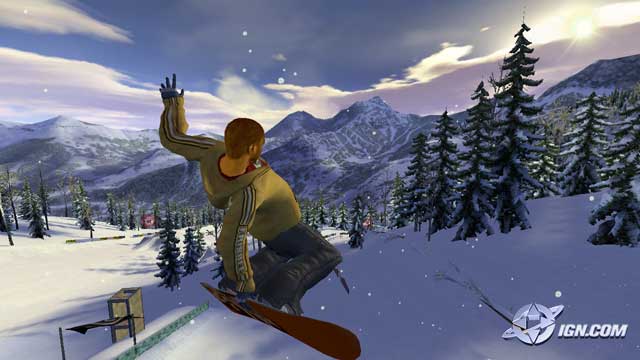 The first Amped was a respectable snowboarding title that could have benefited from some polish. Amped 2 looks better on the surface, but flaws with its underlying gameplay remain. As in the first game, you race down mountains and execute tricks to earn enough points to unlock new courses, characters, sponsors, and gear.

Amped 2's visuals look much cleaner thanks to smoother textures and softer edges. The night courses look particularly inviting. The game's increase in speed is a less-welcome new development. Your snowboarder glides along almost too fast, and the steering feels "squirrely" as a consequence. It's really hard to line up with those narrow ramps! Amped 2 adopts a dual-stick control scheme that employs the right stick to perform grabs. It sounds good on paper, but I never felt completely comfortable with the controls. It's still easy to get caught up on the scenery, but at least now you can press the "back" button to reset yourself.

Amped 2's difficulty progression is good, so you're less likely to get hopelessly stuck in the early stages of the game. A wide variety of challenges will hold you interest, and I loved plowing through all of the snowmen I could find. Amped 2 falters in some regards, but it's still an enjoyable combination of wintry realism and arcade thrills. © Copyright 2010 The Video Game Critic. 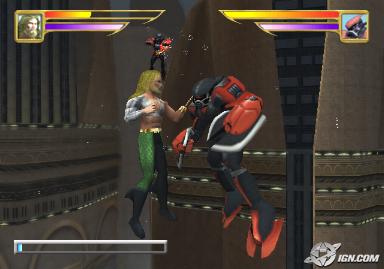 In 2003 I picked up this bargain bin title for $4 new at BJ's. I didn't think I had anything to lose until I played the first stage. Aquaman's swimming controls have all the finesse of a nuclear sub and I found myself getting seasick trying to grab those glowing icons (which I would end up passing right through). Hang in there - it does get better. Aquaman is not the clean-cut blonde from the old Superfriends TV show but a Greek god with a scraggly beard and gold hook for a hand. Despite being released 15 years prior to the movie this game is surprisingly faithful to film! It even features Black Manta as the villain!

The gameplay involves swimming around submerged cities beating up gangs of robots while occasionally detonating an explosive charge. Locating your objective is pretty easy thanks to bright red indicators, but it's hard to tell which way that 3D arrow is pointing. The fighting action is respectable considering you're underwater. When you come within close proximity of a bad guy the camera automatically adjusts to put you both on a 2D plane. This lets you pound buttons to unleash combination attacks that get progressively more complex. Most battles are one-on-one but occasionally the robots will try to make an Aquaman sandwich.

My favorite part of the game is the ability to call on marine animals like dolphins and sharks to tow away pesky foes. Some missions have a nice sense of urgency, like the one where you need to protect a palace from attack. Pay attention to the comic book cells between missions which can shed light on your objectives. Adding variety are mini-sub stages with plenty of rapid-fire shooting and lock-on missiles. While methodically destroying a massive undersea freighter the game calls to mind Star Wars Rogue Squadron II: Rogue Leader (GameCube, 2005).

The orchestrated music makes the action feel momentus, but the game's flaws are evident. Most of the gameplay is rinse-and-repeat and the bland undersea scenery can't hold a candle to Atlantis (Intellivision, 1983). Visual glitches abound including annoying invisible walls. Despite its shortcomings however Aquaman has aged just enough to acquire a quaint, old-school appeal. And when you view Aquaman in the context of the recent film, the game is probably more relevant now than it ever was back in the day. © Copyright 2019 The Video Game Critic. 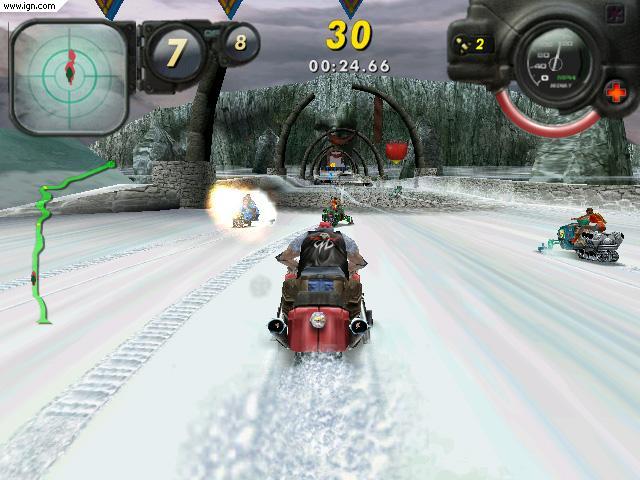 If you're looking for a little fun on a winter afternoon, this exhilarating snowmobile racer won't let you down. Like its predecessor Hydro Thunder (Dreamcast, 1999) Arctic Thunder feels like a virtual roller coaster ride and you careen down mountain slopes and blaze through tunnels at breakneck speeds. There are a dozen fantastic stages that take you through Himalayan ruins, Washington DC, Chernobyl, and Area 51. There's even a Halloween track!

You'll see awesome sights like a Russian sub breaking through the ice and a Frankenstein monster suspended from the ceiling of a haunted castle. Some stages are way over the top but there are also scenic locations like the Swiss Alps with its pristine white slopes and quaint villages. The tracks are wide and inviting and you're constantly noticing something new.

There's a nice sense of speed as well - even in the four-player split-screen mode. The controller vibration however tends to get a little out of hand. Arctic Thunder is fun but shallow. Instead of crashing into walls or trees you just carom off everything. Heat-seeking weapons wreak havoc but even when you blow up the game places you right back on the track - at full speed no less! In fact I'm not convinced there's any penalty for wiping out at all, and that takes a lot of tension out of the game. The developers went so overboard with power-ups you just tend to use them immediately just to make room for the next one.

You enter initials for your best times in arcade mode and "points mode" lets you unlock tracks, vehicles, and characters. I became addicted to unlocking all the tracks because they are so fascinating. I should also mention the load times are remarkably short - almost instantaneous! Unfortunately, the game has a bug that causes the audio to cut out periodically. With little substance but plenty of instant gratification, Arctic Thunder is like the comfort food of winter games. © Copyright 2017 The Video Game Critic.