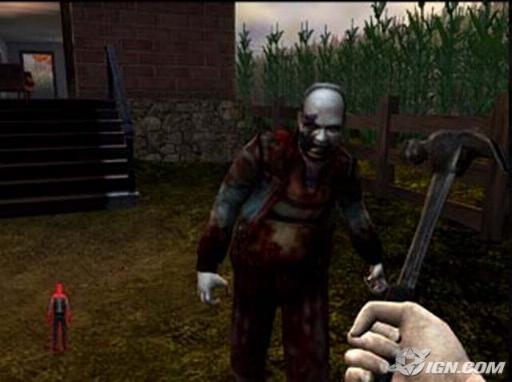 It may not look like much, but if Land of the Dead's purpose is to scare the hell out of the player, it gets the job done. This game didn't seem to garner much attention at the time of release, but it's actually pretty good. It feels decidedly low budget, but then again, a lot of the best horror movies were low budget (Texas Chainsaw Massacre, Night of the Living Dead, Blair Witch Project).

Graphics-obsessed gamers are likely to dismiss Land of the Dead with its angular zombies, plain scenery, and frame-rate glitches. Even I have to admit that the trees look awful. But underneath that rough surface lies some truly unsettling first-person action.

The locations are faithful to the zombie movie genre, and your limited view makes it easy for things to creep up on you. The first stage is set in a farmhouse, and I thought that I was safe after closing my front door. Needless to say I jumped a mile when I saw some rotting ghoul shambling through my living room (and dirtying up my rug). The stage that truly won me over was the cornfield stage. What's more scary than frantically trying to escape a cornfield with decomposing monsters closing in on you? The zombies look scary enough, and while they sometimes stand around clueless, they have a way of lunging at you unexpectedly.

The well-designed controls let you run using the left trigger, but over time you'll run short of breath and have to slow down. There's a lot of firepower readily available, but reloading some weapons can be agonizingly slow. Hey, that just adds to the suspense. Land of the Dead won't win any awards, but if you've ever wanted to play a part in a zombie film, it's exactly what you're looking for. © Copyright 2008 The Video Game Critic. 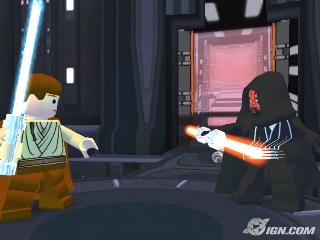 This unlikely game is actually more enjoyable than many of the "serious" Star Wars games of recent memory. The characters, vehicles, and scenery are constructed entirely of Legos, but once you get accustomed to the look, you'll hardly even notice it. What you will notice is the refreshingly simple gameplay and stages that reenact Episodes I, II and III.

The control scheme is uncomplicated (perfect for young kids), and most scenes let you switch between a variety of characters on the fly. The animation is fluid, and when a character is struck down, he breaks into a pile of Lego pieces (awesome!) Jedi knights like Obi Wan can "use the Force" to transform loose Legos into ramps and platforms, allowing you to access new (and hidden) areas. There's no camera control, but it's not really an issue in the single-player mode. It is a factor however, in the two-player mode, where different types of characters are forced to take different routes.

The Episode One stages do a terrific job of incorporating key scenes from the first film, including the pod race and battle with Darth Maul. Between stages, humorous cut-scenes fill in the rest of the story. There are no voices (just mumbling), but the musical score is straight from the films. It may seem tedious to have a text crawl for each new chapter, until you realize it's really a thinly veiled load screen.

Compared to Episode One, Attack of the Clones feels abbreviated, as if the developers ran out of time. As for Episode III, well, I couldn't bring myself to spoil a movie I haven't even seen yet. Lego Star Wars' main "story" mode is brief, but there are literally hundreds of locked items and playable characters to go back and unlock. But although I was initially thrilled with the game, eventually it did start to wear thin. With an easy difficulty level and unlimited continues, there's little tension or excitement. Lego Star Wars is a little short, but the concept is cool enough to warrant a purchase. © Copyright 2005 The Video Game Critic. 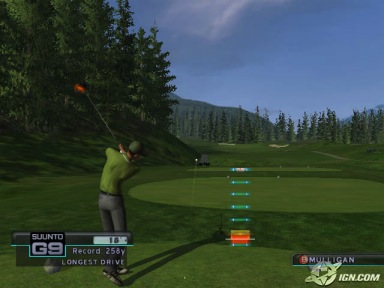 Links 2004 makes me realize how far golf games have not come in recent years. In terms of pure gameplay, this compares favorably to any of the more recent golf titles. Links is easy to play and looks terrific. Its natural-looking locations range from a traditional Scottish course to the volcanic shores of Maui - complete with breaking waves. Come to think of it, I don't think I've ever seen scenery this good in an EA golf game. Clear natural sounds like chirping birds and drizzling rain make the experience all the more immersive. There are even some slick surround sound effects when the crowd of spectators applauds.

Most of the golfers are fictional, but their mannerisms are interesting and I like how they realistically contort their bodies while swinging. Special effects accompany exceptional shots, including air ripples and stop-motion photos. Links 2004 has a brief tutorial that does a nice job of getting you started quickly. The control scheme is a hybrid of sorts, combining the meter of an old-fashioned golf game with the analog movements of a Tiger Woods game.

But it's the brisk pacing that makes Links 2004 so engaging. You can expedite each shot by holding the A button, and doing this allows you to play 18 holes in well under a half-hour. The load screens are barely perceivable and saves are transparent. If there's one glaring issue, it's the putting game. It's extremely easy to overshoot - especially on short putts. Expect to see a lot of balls rim-out or pop up after hitting the hole.

Another issue is the skill level, which can be confusing. It affects the number of gauges on the screen in addition to the general difficulty. I would prefer to adjust those separately. And what's up with the loud guitar music on the menu screens? Inappropriate... inappropriate... Links 2004 isn't perfect, but it's addictive, and over time I fell in love with it. Last but not least, it sure is refreshing to play a golf game without Tiger Woods hogging the spotlight! © Copyright 2010 The Video Game Critic. 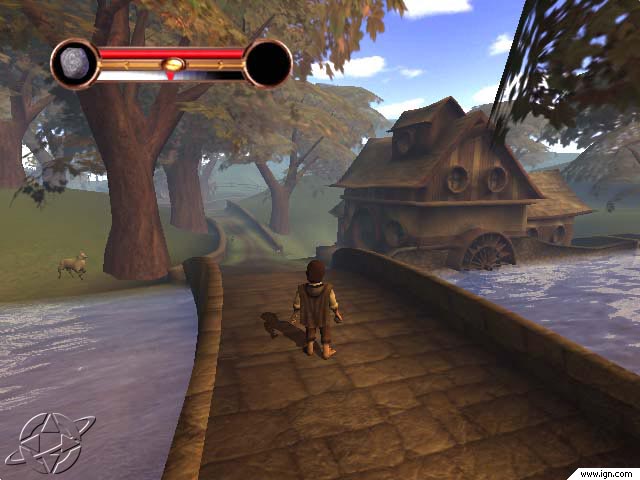 Unlike the other Lord of the Rings games available for Xbox, this was not licensed by the movie. Since I don't read books (without pictures anyway), I was disappointed. Fellowship of the Ring wrongly assumes the player has read the book, referring to various characters, items, and locations that are never explained. The production values aren't bad. The fairy tale graphics have a smooth "painted" quality, with details like falling leaves and scurrying squirrels. An orchestrated musical score adds drama and intensity.

The game involves guiding Frodo and friends though quaint villages, dark forests, and deep mines. You'll find weapons along the way but for the longest time you're limited to smacking foes around with a lousy stick. Township areas like the Shire offer optional side quests, but in my experience these tedious tasks (which include pig wrangling) are not worth the time and effort. Fellowship has its share of stealth gameplay, especially when the ominous black riders show up. The difficulty is fair and you can save at any time.

So what's the problem? Well, the camera sucks and the user interface is clumsy. Mazelike stages lead to aimless wandering through murky surroundings (a map would have been nice). It's slow going and the deliberate pacing made it hard for me to stay engaged. Fellowship of the Ring may be worthwhile for fans of the book, but I felt more like an outsider looking in. A very bored outsider. © Copyright 2012 The Video Game Critic. 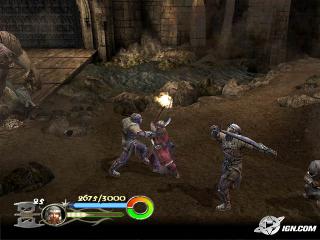 Perhaps the novelty is finally wearing thin, but I enjoyed Return of the King far less than The Two Towers. Sure the quality of the graphics and sound are still there, but the gameplay is tiresome, the camera angles stink, and the new two-player mode is a complete disappointment. Each new stage is introduced with several minutes of video footage, mostly culled from the films. While the video looks great, it would be nice to have the option of skipping these lengthy intros. Thankfully, you can skip them if you need to repeat the level.

Return of the King takes our heroes through places like the Halls of the Dead, Shelob's Lair, and Minas Tirith, and realistic graphics faithfully recreate these film locations. The audio quality is also superb, with a soaring musical score and frequent (but non-repetitive) voice samples. The controls let you slash, parry, fire projectiles, jump back, and perform a "finishing move". There's plenty of button mashing involved, but you can also manipulate your sword using the right joystick. Special moves can be purchased as you progress, and these are executed using various button combinations.

In most stages one or two companions fight by your side, but they aren't very aggressive and often just get in the way. Having a friend control a second character seems ideal, but the atrocious camerawork really hinders the fun. My friends didn't enjoy playing this game one bit! In terms of design, the Hall of the Dead stages are particularly annoying, as the dark, foggy areas make it hard to see what's going on.

In addition, the sheer number of enemies you need to dispatch in certain areas borders on ridiculous. Since most battles take place on the edge of cliffs, you're always trying to knock enemies off the edge, but it rarely happens. Worst of all, dying forces you to replay large chunks of levels you painstakingly had to slash your way through. For those who persevere, Return of the King does offer some terrific extras like interviews or concept art. But I suspect most gamers will lose interest after the first few stages. © Copyright 2004 The Video Game Critic. 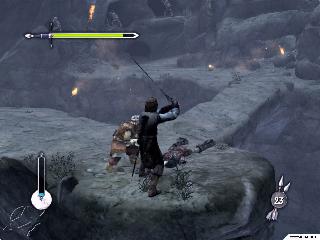 Following the storyline of the first two Lord of the Rings movies, this action-packed hack-n-slash game matches the epic scale of the films. In terms of production quality, The Two Towers is beyond reproach. Between stages, actual movie footage fades nicely into cutscenes, which transition nicely into game graphics.

Assuming the role of various characters from the film, you muscle your way through hordes of orcs and goblins like a modern-day Golden Axe (Genesis, 1989). New moves are purchased with experience points as you progress through the game, and you can strike foes from a distance using projectile attacks (which all characters have). No elaborate aiming system is needed - you just point and shoot, and your shots tend to be deadly accurate.

Games of this nature have a tendency to be pretty repetitive, but Two Towers is nicely paced with short, constantly changing levels and interesting boss encounters. Adding replay value is the fact that you can play through each level using multiple characters. Toss in bonuses like production photos, interviews, and secret missions, and this is a good value.

My main beef is the lack of a two-player mode. It's particularly puzzling since most levels feature two fighters fighting side-by-side, one controlled by the CPU. The camera can be a pain at times, but it's not a showstopper. Lord of the Rings The Two Towers is a good looking game that should appeal to those who can't get enough of the films. © Copyright 2003 The Video Game Critic.