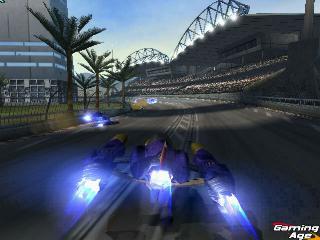 I've played plenty of futuristic racers with hovering vehicles, from F-Zero on the SNES to Wipeout on the Playstation. But Quantum Redshift seems to have learned from the lessons of those past games and put together a superior product. It has simple controls, large vehicles, and some of the most visually compelling tracks I've ever seen.

You'll race through loops, underwater, and over waterfalls. The scenery is so varied that it's impossible to describe, but always magnificent in scale. When you race through water, drops bead on your windshield, and it looks terrific. Likewise the explosions are huge, colorful, and satisfying. The simple control scheme lets you shoot homing missiles, straight missiles, engage turbo, or activate a shield. The shield is great to have when you're in the lead (or approaching the finish line!). You're warned of incoming fire so you even know when to engage it.

The racing vehicles are large and meticulously detailed. While they may bounce off walls quite a bit, they never slow down much. The races are relatively short, and you'll always look forward to seeing what the next track has in store. An up tempo (but repetitive) techno soundtrack keeps the intensity high.

So what's not to like about this game? Well the difficulty goes through the roof when you go from amateur to expert level, and some of the advanced tracks are very narrow and windy, requiring memorization to do well. Also, Quantum Redshift isn't very original, and you probably have a game like this in your collection already. But it's certainly a wild, exciting ride. I played it until my index finger was sore. Sounds like a recommendation to me. © Copyright 2003 The Video Game Critic. 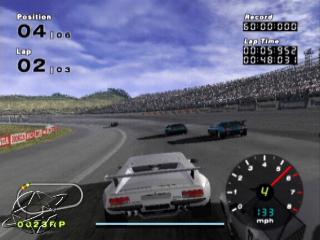 Despite the name change, R: Racing Evolution is the spiritual successor of Namco's Ridge Racer series, which was wildly popular on the original Playstation thanks to its exotic tracks and arcade-style gameplay. The disappointing Ridge Racer V was released at the PS2 launch, and it had "rush job" written all over it. I was hoping R: Racing Evolution would get the series back on track, but this game is fairly worthless.

Straying from it's arcade roots, Evolution tries to do everything other racing games are doing, but doesn't do them nearly as well. It offers realistic tracks and cars (a la Gran Turismo), street racing (Need For Speed Underground), rally racing (Rallisport Challenge), and awards you points for slick maneuvering (can you say "Project Gotham Racing"?) The graphics are average and the tracks are awfully boring. The driving action is sleep-inducing. There's zero sensation of speed or excitement, and every lap feels like an arduous ordeal.

The cars handle like Mack trucks, and you'll constantly plow into the guardrails on turns. After one race, my friend Scott turned to me and asked, "Can you unlock the good game?" R: Racing's few original features are remarkably lame. First, there's the "auto-brake" which automatically slows you down during turns. Who the heck asked for THIS? Sure it makes the game easier, but who wants the computer doing half the driving for you? Next, we have the "pressure" meters that look like health bars above the cars ahead of you. Apparently, closing in on other cars makes them nervous and susceptible to committing "mistakes". I don't get it.

During races, you can hear your manager and other racers talking over the radio, and this would be interesting if their remarks weren't so repetitive. The "Racing Life" story mode (laughably described as "immersive") is simply a series of races and cut-scenes tracing the story of a hot Asian chick who becomes a serious racecar driver. If not for the skintight outfits and gratuitous cleavage, these cut-scenes would not be worth watching at all.

R: Racer also includes a slew of "challenges" for the single player, but you have to purchase each one, which is dumb. One thing I do like is the high-angle instant replays, which look television-quality, at least until you notice those flat cardboard spectators in the stands! The soundtrack is weak, and some of the menu screen music sounds like it's broken. With minimal innovation and no sense of purpose, R: Racing Evolution is completely forgettable. I'm not sure why this even exists. © Copyright 2004 The Video Game Critic. 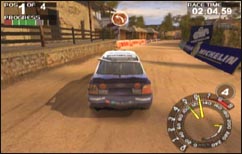 You have to love rally racing. It's all the thrills of real racing without the control! We're talking about racing through the sand, mud, or on ice. You're going to slide around a lot, so you'll need to use more finesse than you would in a typical racer. My first experience with rally racing came with Sega Rally on the Saturn (1996), which set the standard quite high. Nowadays, even Gran Turismo (PS2) has rally tracks. There's just something about careening through the elements half out of control.

Rallisport offers two basic types of racing action. You can race against time through a series of track "segments", which take you through mountains, countrysides, and deserts. Or you can challenge three other cars in more conventional races with circuits and laps. A four-player split-screen mode is also included. The graphics are top notch. The shiny cars look real, and kick up plenty of dirt and mud. The tracks are realistic, and the use of lighting is phenomenal. The snow tracks with shiny ice are particularly striking.

The tracks aren't overly long, so the races don't go on forever like they do in some other games. Tight controls allow you to execute precision power slides thanks to flawless physics modeling. Once you get the hang of the controls, it's easy to get carried away and try to speed through the course. But be aware that hitting an embankment can send your car spinning through the air. It can take time for your car to upright itself, but the convenient white button will put you right back on track. I've found that using other cars as "guard rails" is an effective technique.

So what's not to like about Rallisport? Well, like many racing games, you don't get any computer opponents in the split-screen mode, which is very disappointing. Also, some players may have a hard time finding a comfortable camera angle. I finally settled into using the most distant behind-the-car view.

The game provides visual and audio cues about upcoming turns and road conditions, but it often seems like it's two turns ahead, which is confusing. Finally, you'll need to complete some very difficult and long competitions in order to access most of the tracks and cars. But overall this game is loads of fun. Some players won't like all the sliding, but this is a rally game, and you can't blame a tiger for being a tiger. © Copyright 2002 The Video Game Critic. 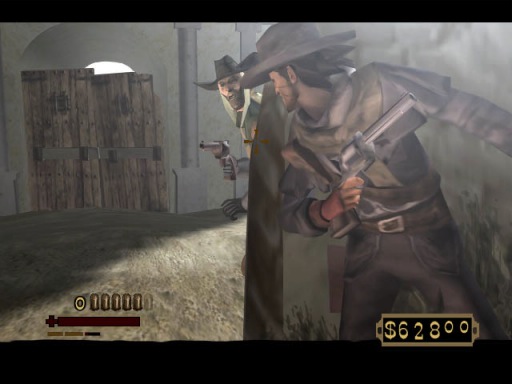 I hardly consider myself a fan of the genre, but I've been known to appreciate a good western game provided there's enough spurting blood and extended death sequences. Red Dead Revolver satisfies my criteria. The star of the game is a bounty hunter named Red, but you'll play as several characters throughout the adventure.

Eschewing a lengthy tutorial, Red Dead sprinkles in short training challenges as new techniques are introduced. Taking cover behind scenery is key, and special "red dead shots" employ slow-motion so you can unload on several targets at once. The controls are good, and when a fountain of chunky blood spurts forth from an enemy, it's satisfying! The outlaws tend to be really ugly - as all bad guys should be!

Red Dead Revolver is linear in design, but that keeps the narrative tight and the pacing crisp. The cut-scenes are brief but you can easily skip them. The game boils down to a series of sharp-shooting challenges in varied locations like a runaway train, a rocky mountain passage, and a ghost town. The stages vary dramatically in length, ranging from about a minute to nearly a half hour. Red Dead's gunplay has shades of Halo, especially when you face the diminutive, giggling clown outlaws. I detected no serious flaws, but occasionally a frustrating boss (like Pig Josh) will disrupt the game's momentum. There are also a few circumstances where you have to restart the entire stage after an untimely demise.

Red Dead Revolver is a game of exceptional quality. During a train shootout, you'd expect that falling off the train would spell your demise, but no - it's actually possible to climb back on! The developers used faded colors, blurry visuals, and "film imperfections" to give the game a weathered look, as if you were watching an old western on TV. The music is fantastic and the voice acting is convincing. If you're looking for a western that's heavy on action and light on drama, Red Dead Revolver is your game. © Copyright 2010 The Video Game Critic. 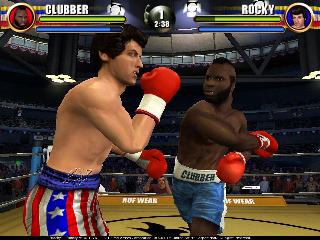 I've played plenty of boxing games in my day, from Activision's Boxing (Atari 2600) to Punch Out (NES, SNES), to Evander Holyfield's "Real Deal" Boxing (Genesis), to Ready 2 Rumble (Dreamcast), but Rocky is probably the best. UbiSoft should be congratulated for somehow managing to strike the perfect balance of arcade action and realism. And unlike most movie-based games that squander their license, this one is surprisingly faithful to the Rocky movies, with fighters, arenas, music, and cut scenes taken directly from the five films. When you see those awesome movie clips and hear that classic theme, you can't help but get pumped up.

The fighters look amazingly real, and their animation is silky smooth. As punches land, blood and sweat flies, and the fighters clearly take some serious punishment. Trainers council the fighters in their corners between rounds. Rocky fans will love the meticulously detailed arenas, which include a chapel, a bar, grand arenas, and even outdoor venues. But what's most surprising is the quality of the gameplay.

The controls are easy to grasp, and there are a wide variety of punches and dodges. The fights tend to be intense and exciting. Even a fighter who's losing badly can manage a knockout if he unleashes a fury at the right time. The two-player mode is tremendously competitive, and I actually worked up a sweat playing it. In the one-player mode, the boxing matches follow the sequence of the films, and Rocky even "evolves" as you progress. You can save your place after each bout.

You'll need to train Rocky between bouts in order to build up his strength, stamina, movement, determination, and speed. Unfortunately, the training sessions can be confusing to figure out, and the difficulty is uneven. Thankfully UbiSoft included an "auto-train" mode for those who have trouble.

What's not to like? Only a few minor things are worth mentioning. First of all, it would be nice to have commentators during the fight. I wish the boxers wore their robes as they are introduced and approach the ring. Also, they apparently didn't secure the license for the song "Eye of the Tiger", which is a major letdown (a second-rate sound-alike is used instead). And who the heck is that "Big Yank Ball" guy? But all in all, Rocky is a fantastic game that far exceeds expectations. Outstanding! © Copyright 2003 The Video Game Critic.