Hot on the heels of the Atari 7800, Atari inexplicably released another game console, the Atari XE Game System (XEGS). A bizarre move, it was as if Atari had realized their losing strategy with the 7800, and wanted to immediately change gears and take an entirely new approach. This time, Atari attempted to leverage their extensive and highly regarded 8-bit computer game library. Eight years in the making, the library was chock full of quality titles. Ironically, Atari had eschewed marketing their computers as game machines in the past, insisting their systems were better suited for "practical" applications (as if!). The XEGS was essentially an Atari XE computer in a fancy console shell. Although cartridge-based, it would support all the standard Atari computer peripherals including floppy disk drives, tape drives, and printers. Unfortunately, most of the games it could run were old and could hardly compete with the fresh new titles coming out for the NES. Still, there's no denying that the XEGS runs some terrific, classic titles. It's a shame it was packaged with the lackluster Flight Simulator 2 and Bug Hunt. Apparently these were chosen to justify the keyboard and gun accesories. Atari proceeded to repackage several old classics like Archon and Blue Max in cartridge form, but the system was basically dead on arrival. Sharing the same fate as its sister, the Atari 7800, the XEGS languished briefly before fading into video game obscurity.

Console design: D. I'm convinced Atari hired a flamboyant interior designer to conceive the look of this console. With its cream color, smooth surface, and large pastel-colored buttons, it resembles an artist's palette. While aesthetically pleasing, the design is anything but practical. It's a sin how the controller and keyboard ports are tucked away in tiny alcoves under the side of the console. There's little room for fingers down there, so plugging in controllers is a major hassle. The keyboard, which could probably be considered part of the console, has a ridiculously short cord that forces you to place it directly in front of the console. It might as well be attached to the console, but that would ruin the clean, minimal look the designer was shooting for.

Console durability: B+. The machine feels pretty solid, and Atari's 8-bit computers were always durable and well made. I have little reason to believe the XEGS is any different. 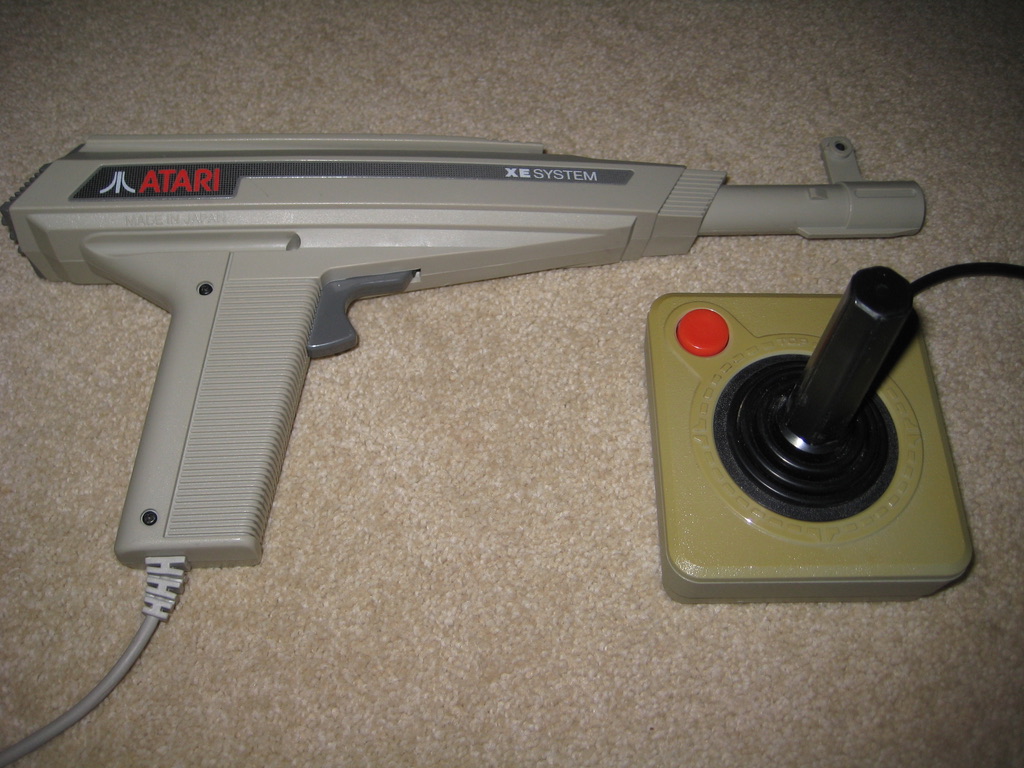 Controllers: C. There's not much to say, considering the console uses standard Atari 2600 joystick controllers. Although cream-colored to match the system, you can rest assured it's still the same cheap, plastic joystick you broke 100 times on the 2600. The single-button configuration is limiting, but this is offset by the keyboard, which provides a wide range of control options. Finally, you get a big, goofy looking light gun that looks like something from an old black and white Flash Gordon episode. I've read numerous complaints about its accuracy, but in my experience with light guns, this one is about par for the course. 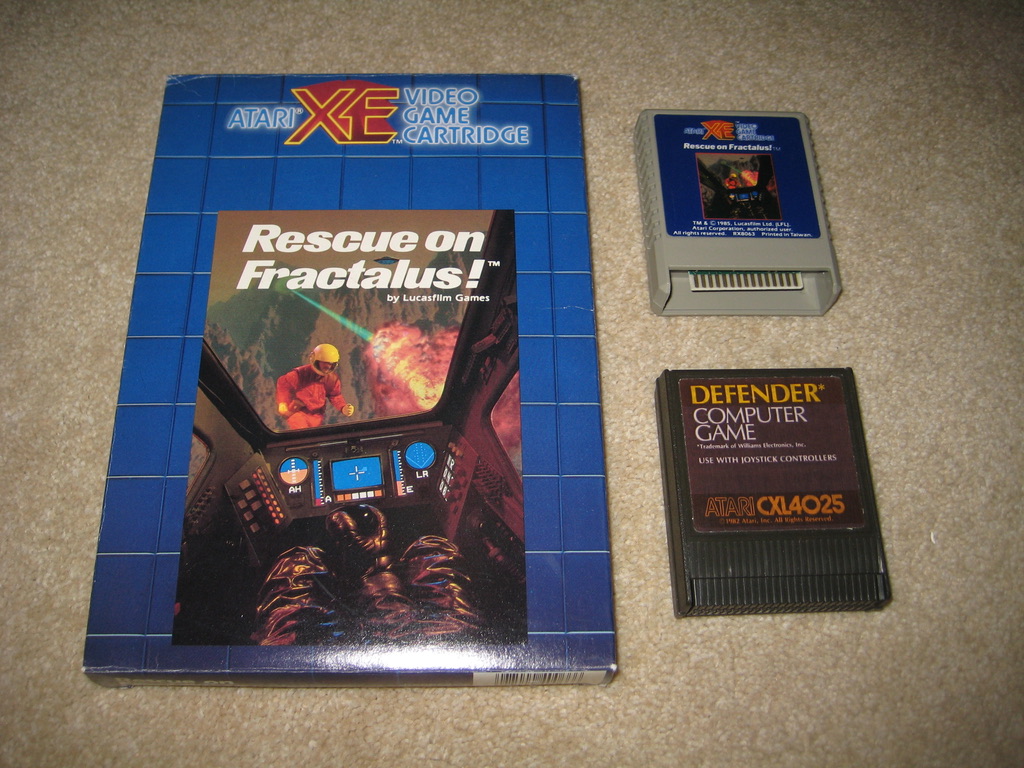 Media: C+. Forced to adopt the same cartridge shape as the Atari XE computers, XEGS games look like small, rectangular bricks. Although the original Atari computer cartridges had an ugly brown and yellow color scheme, carts made for the XEGS look very attractive. If you invest in a 1050 disk drive, you can also play a huge number of Atari computer games released on 5 1/4 floppy disk format. Despite what I was advised in the 1980's, these disks are surprisingly durable, and in my experience, the data does not fade away. I have had no problems playing games on floppies that are well over 20 years old.

Packaging: B. XEGS titles were packaged in blue boxes like those for previous Atari systems, featuring elaborate artwork over a pattern of crisscrossing lines.

Games: A. Comparable to the Commodore 64, the Atari 8-bit library is huge and features a fantastic selection. There are fun platform games, sophisticated strategy games, text adventures, flight/combat simulators, and versions of all your arcade favorites.

Graphics: A-. Despite running on technology developed in the late 1970's, the XEGS' graphic prowess compares favorably to the other systems of its day, namely the NES. The system has the ability to display high resolution graphics in a multitude of colors. In addition, XEGS games rarely exhibit the flicker, break-up, or slow-down common on other 8-bit systems. 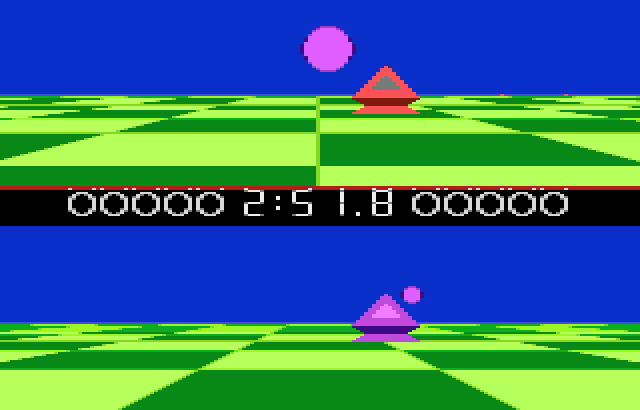 Audio: A-. Better than the 7800 or NES, the XEGS' audio capabilities are exactly the same as the Atari 5200 (both use Atari's Pokey chip). It was able to generate realistic explosion effects, terrific music, and even some decent voice synthesis.

Collectability: B. For collectors, the Atari XE Game System has a lot of terrific titles, most available at cheap prices. Finding complete versions of some of the disk-based software can be a challenge however. For gamers raised on an Atari 8-bit computer (like myself), this console is a natural choice. Then again, from a practical point of view, you get the same capabilities from a normal Atari 8-bit computer, which is more compact and probably cheaper to acquire.

Check for Atari XE systems on Ebay
Atari XE Game Reviews
System Review Index
Copyright 1999-2020 The Video Game Critic.  The reviews presented on this site are intellectual property and are copyrighted. Any reproduction without the expressed written consent of the author is strictly prohibited. Anyone reproducing the site's copyrighted material improperly can be prosecuted in a court of law. Please report any instances of infringement to the site administrator.