As the owner of an actual Tapper arcade machine (the original Budweiser edition) I feel uniquely qualified (over-qualified?) to review this game. The premise is to move a bartender between four bars, sliding beverages down the line to fend off an onslaught of thirsty patrons. Your bartender is rendered with personality and charm, and I like how he wipes the counter between pouring beers.

The four stages include a normal pub, a college football tailgate, a punk rock bar, and an intergalactic saloon. There are also surprisingly tough "drink shuffle" bonus stages. One thing that turns me off about this Tapper is the Mountain Dew signs prominently displayed in the back of each bar. Oh yeah, I'm sure college students and punk rockers line up at bars to order soda.

The first few stages are fun despite the brown-and-yellow patrons that tend to blend into and overlap with each other. The cash tips are represented by small yellow dollar signs that are easy to miss. "Oh Susana" loops in the background, and it will get on your nerves.

Tapper is enjoyable until the challenge really kicks in during the punk rock bar stage. Once more patrons enter the picture, slow-down occurs which throws off your timing and degrades the controls. And why are there Stormtroopers in this stage? I would expect them in the space stage, which is an absolute mess by the way. The aliens look like glitches, and the slowdown is extreme. Tapper is a respectable arcade game, but this home edition tastes watered-down to say the least. © Copyright 2014 The Video Game Critic.

Released on several home computer platforms in the mid-1980s, Transylvania is an old-fashioned text adventure enhanced by artistically rendered illustrations. The keyboard is used to enter simple directions (N for North, S for South, etc) to navigate a wooded landscape with a castle, lake, and old house. Simple commands like "take", "drop", and "move" are used to interact with items. The game progresses in a linear fashion as you look for key items to open a door or initiate an event.

Transylvania's graphics are pretty good. Having played my share of text-only games years ago, I will admit that there's something to be said for being able to see your environment. Most of the illustrations won't strike fear into your heart, but that dark werewolf with glowing eyes certainly looks creepy.

Transylvania is interesting to play, but the game doesn't always make sense, and can be terribly unforgiving at times. For example, when you open a coffin to reveal a set of items, you need to grab the mice immediately before they run away, or it becomes impossible to finish the game! Stuff like that makes the game more frustrating than it should be (hint: use the FAQ).

The inventory management system is awkward and the storyline tends to go off on weird tangents, including an alien encounter. Transylvania definitely lacks polish and good design, but its hand-drawn visuals and old-school gameplay do have their charm. © Copyright 2008 The Video Game Critic. 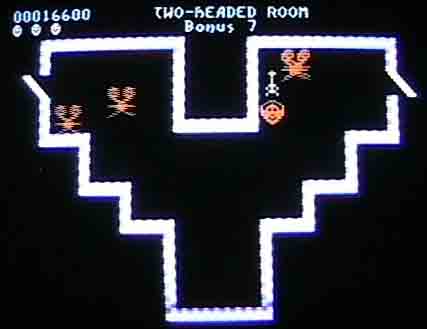 I always appreciated the simplicity of this 1981 arcade game. Venture puts you in control of a smiley face that's only slightly more sophisticated than the square you control in Adventure (Atari 2600, 1980). The general premise might be described as Dungeons and Dragons Lite. You move between rooms, shoot monsters with arrows, grab treasure, and move on. Rooms are accessed via a map screen patrolled by hall monsters. Each room has its own unique shape, treasure, and animated creatures. You'll encounter goblins, trolls, skeletons, genies, cyclops, demons, and many more. It's a good thing the rooms are labeled, because those "dragons" look more like chickens!

Previously, the best home version of Venture was the Colecovision edition, but that was hampered by stiff controls. In contrast, this Atari XE version feels fine-tuned and turbo-charged. Your character quickly darts about and holding the fire button lets him fire a steady stream of arrows. Each monster has its own "shot with an arrow" graphic, which makes shooting them all the more satisfying. This game feels less like a dungeon crawler and more like a frantic arcade romp.

In addition to the "original recipe" stages, a "remixed" mode offers an additional set of rooms containing grim reapers and medusae. The multicolored treasures and wall textures look sharp, and the old-school, harmonized jingles are pleasing to the ears. The game is remarkably playable and insanely fun the first time through. Once you get the hang of the patterns however, it does become repetitive, and the game awards too many free lives. Still, Venture is an underrated game, and I'm happy it finally got the definitive version it deserves. © Copyright 2014 The Video Game Critic.

You might be wondering how this Olympic-style title compares to Epyx's iconic Winter Games (1985). Would you believe Winter Games was never even released for the Atari 8-bit machines? I guess that left the door wide-open for clones like this one. Winter Challenge is spread over four sides of two floppy disks. Needless to say, there's a heck of a lot of disk-swapping and loading required to play this.

After the obligatory opening "torch" screen you're prompted to enter the names for up to six players. You also have the option of selecting which of the five events you'd like to participate in. It's a great feature, because there's a good chance you'll hate at least one of them. You begin with downhill skiing which employs a behind-the-back view as you weave through trees and hop over logs.

The controls are intuitive but the scaling is rough, and during jumps it looks like you're barely lifting your feet! The key to the second event, ski jump, is to keep your skis parallel in the air so you can nail the landing. Your skier looks like a blue yeti, but I love the view of the trees and snowy village below. The biathlon event makes you wiggle the joystick to cross-country ski between screens, stopping periodically to shoot targets by guiding a wavering crosshair.

The scenery really steals the show with spectacular mountain peaks, bridges over tranquil streams, and gorgeous lake views. Be sure to take your time during the shooting phases, because the penalties for missed shots are severe. The next event, slalom, is tough for novices because it moves so fast. Even if you can avoid crashing into a wall, it's hard to tell what side of the flags you're supposed to be on! I guess that's what the "retry" option is for! Like most events, slalom is fun once you get the hang of it.

That can't be said for the final event however. Bobsled is positively yawn-inducing! The course feels like it's 600 miles long, and just the thought of running three heats is nauseating! There's no closing ceremony to conclude the games, just a simple medal standings display. Winter Challenge could have used more polish, but it does live up to its name, and its nicely illustrated scenery gives the game added appeal. © Copyright 2014 The Video Game Critic.

I *heart* Wizard of Wor so much. This maze shooter lets one or two players shoot waves of freaky creatures before facing off against a mysterious wizard. The graphics are a little chunky, but they are colorful and well defined. Each wave offers a variety of foes including dog-like creatures that fire missiles and the winged "Worluck" that frantically flutters about. Certain enemies can turn invisible, but a handy radar display lets you track their position.

The sound effects in this game are downright ominous. The opening refrain sounds like a haunted organ, and during each stage a resonating cadence gradually quickens. The directional controls take some getting used to, but I like how you can duck around a corner and get off a quick shot. When you shoot a creature, its projectile also disappears, and I have mixed feelings about that. It makes the game easier but it doesn't make much sense. Also, I really wish you could shoot through explosions.

The two-player action is okay, but once both players start shooting each other it cuts the game short. I'm reviewing the cartridge version, but the disc version allows you to save your high scores. The one thing missing from this game is the voice, which is a little disappointing since the Atari XEGS is capable of voice synthesis (without added hardware). Still, Wizard of Wor's simple, fast-moving style will appeal to arcade-minded gamers. © Copyright 2013 The Video Game Critic.

I still recall the day I first laid eyes on this isometric space shooter at the local bowling alley. It blew my mind back then, and frankly the game still looks pretty sharp today. Prior to reviewing this I played a few rounds of the highly-regarded Colecovision edition as a basis for comparison. I was surprised by the difference between the two.

This Atari version is much smoother, faster, and better looking. The graphics are cleaner and your ship is significantly larger. This game runs roughly twice as fast as the Colecovision version, so you can blow through the first few stages in no time. If I have a complaint, it would be how in the "deep space" sections it's really hard to judge the position of approaching ships with respect to yours. Also, it's not quite clear how to defeat that robot boss.

Otherwise this is probably the best home version of Zaxxon. I noticed that the box has a $49 price sticker, which seems pretty steep for a floppy disk. I'm considering filling out the registration card so I can receive a full-color iron-on transfer (allow 4 to 6 weeks for delivery). © Copyright 2011 The Video Game Critic.

Few 8-bit shooters deliver the rapid-fire mayhem and wanton destruction of Zeppelin. You control a blimp that can fire in eight directions. The screen scrolls automatically as you slowly wind through maze-like caverns, blasting barriers, airships, and balloons. You can blow up just about everything in sight. See those quaint houses protected by force fields? You can obliterate them for points! The caverns are rendered in lovely fluorescent colors and the background noise of grinding gears is really cool. As icing on the cake, the carnage is punctuated by satisfying, high-resolution explosions.

The default novice level begins with the message "entering stage 7". Wait, what? Oh I see - these stages count down instead of up! Maneuvering your blimp takes some practice. You can influence which way the screen scrolls if you position it correctly. Shooting switches will toggle traps on and off, so if you find yourself in the clear, leave those switches alone! You can only fire in one direction at a time, and I had some trouble hitting the diagonals. The touchy controls make it tough to navigate some narrow passages and the collision detection doesn't do you any favors. After crashing into something the game pauses momentarily so you can reposition your ship. If you're not paying attention you can lose two or three ships in a row!

To gain access to certain parts of the cave you'll need to collect and deposit giant keys and hamburgers (yes, hamburgers). Your beat each stage by placing TNT into a particular box. It's nerve-wracking when you're on your last ship lugging that TNT around. As if the game wasn't challenging enough, earthquakes shake the screen and rubble rains down. When the second stage begins this game absolutely loses its mind. Now you're speeding through caves packed with flying objects and earthquakes going off non-stop. The stage designs become repetitive after a while, but you have to love Zeppelin's brand of arcade-quality shooting fun. © Copyright 2016 The Video Game Critic.